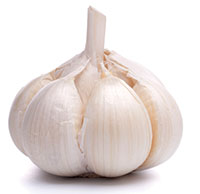 On a sunny day in southern California, over 140 health professionals, from 22 countries, gathered at the International 2014 Garlic Symposium, March 4–6, to report the latest findings on the health effects of garlic and its preparations, with Kyolic Aged Garlic Extract (Wakunaga) taking center stage. The Harbor-UCLA Medical Center, the University of Florida and Wakunaga of America sponsored the symposium, held at the St. Regis Monarch Beach Hotel, in Dana Point.

A Short Overview of Garlic
Garlic (Allium sativum) is thought to have originated in Siberia. Its uses go back to antiquity; found in the pyramids in ancient Egypt and in medical documents in various parts of the ancient world, including Greece and Rome, where it served as a remedy for many ailments. In the 19th and 20th century garlic was listed in the USA pharmacopeia and was used to treat wounds, as an external anti infectious agent, a prominent use in World War II.

Modern science has confirmed garlic as a medicinal herb but because of its potent odor that lingers on the skin and breath and its potential gastrointestinal adverse effects, many consumers have chosen the odorless Kyolic AGE supplement. Safe, standardized by high quality control and highly bioavailable, AGE has a wide range of health benefits that often exceed those of fresh garlic and is the choice preparation in research on garlic and health, resulting in over 700 peer-reviewed journal articles.

Studies presented at the Garlic Symposium provided the latest information on the health benefits of AGE, including cardiovascular health, immune regulation and the mitigation of metabolic syndrome, a condition where increased blood pressure, high blood sugar, excess body fat and abnormal cholesterol levels occur together, increasing the risk of heart disease, stroke and diabetes.

New Information On Components of AGE
Made by Wakunaga of America, from organic garlic, by lengthy extraction and aging at room temperature, Kyolic AGE is rich in stable water-soluble organosulfur compounds (e.g. S-allyl cysteine and S-allyl-mercapto cysteine) and contains lipid soluble organosulfur compound and other components with antioxidant activity. Additional antioxidant effects include increasing the activity of superoxide dismutase, catalase, and glutathione peroxidase and scavenging hydrogen peroxide and free radicals. As reported in the present symposium by Drs. Hoffmann and Stark from the Technical University in Freiburg, AGE also contains two heretofore unidentified ligning compounds (polyphenols) that are potent antioxidants.

Dr. Toshi Ide, director of Research and Development at Wakunaga of America, stated the importance of these newly discovered non sulfur substances, formed in the aging process, complementing the known organosulfur compounds present in AGE.

Dr. Budoff’s most recent clinical study, showed the potential of AGE to decrease coronary plaque in 71 patients with metabolic syndrome, using cardiac computed tomographic angiography. This state of the art technology confirmed that AGE slowed the progression of total plaque accumulation by as much as 80 percent, in these patients.

Dr. Budoff stated, “Our studies demonstrate the benefit of Aged Garlic Extract on both plaque changes over time and new plaque formation. We have completed four randomized studies to date and all have led us to concur that AGE is both beneficial for slowing atherosclerosis (hardening of the arteries) and reversing the early stages of heart disease. Few therapies have ever been able to slow or stop atherosclerosis and AGE is now in an elite class of therapies that allow us to potentially reverse the process of heart disease.“

AGE and Endothelia Cells
Dr. Norbert Weiss, from the Technical University in Dresden, Germany, reported studies in which he collaborates with Dr. Toshi Ide, which further confirmed the cardiovascular benefits of AGE. The studies, related to the fact that atherosclerosis development is associated with endothelial cell dysfunction (cells lining blood vessels), due to a deficiency in a blood pressure regulator nitric oxide (NO), a condition exacerbated by high homocysteine. Their clinical studies showed that AGE prevented the adverse vascular effects of homocysteine. Their in vitro studies showed that AGE prevented NO deficiency by preserving endothelial cell normal NO output, even in the presence of high homocysteine and, furthermore reduced the risk of atherosclerosis by inhibiting foam cell formation, that enhance cholesterol accumulation in blood vessels.

Blood Pressure and Platelet Aggregation
High blood pressure and increased stickiness and adhesion of blood platelets are risk factors for heart attacks and stroke. Dr. Khalid Rahman, of Liverpool John Moores University in the UK, showed that AGE inhibits platelet aggregation both in vitro and in vivo, by increasing molecular regulators, cAmp and cGMP and altering receptors on the platelet, which reduces their binding to each other. He also showed that AGE displays strong antioxidant properties both in vitro and in vivo. Dr. Khalid Rahman stated, “Since AGE inhibits platelet aggregation, we propose that AGE taken regularly may have a role to play in reducing the risk of heart attacks, strokes and other thrombotic episodes in individuals with either cardiovascular disease or at a risk of developing cardiovascular disease. AGE may also result in a reduction in oxidative stress which is linked to many chronic diseases.”

Dr. Toshi Ide, pointed out, “This research on AGE and anti-platelet aggregation is one of the key mechanisms in supporting AGE’s multiple effects on the prevention of cardiovascular disease.”

Blood Pressure and Immunity
Meta-analysis is a statistical analysis of separate but similar experiments to test the pooled data for statistical significance. Dr. Karin Ried, from the National Institute of Integrative Medicine in Melbourne, Australia, reported the effects of garlic in lowering blood pressure in a meta-analyses of 18 trials with 870 participants, showing a significant mean decrease in systolic blood pressure of 4.7±2.2 mm Hg, compared with placebo, and in nine trials with 400 hypertensive subjects, a mean decrease of 8.7±2.8 mm Hg compared with placebo. Only five of the trials involved subjects with high diastolic blood pressure and in those, the consumption of garlic resulted in a mean blood pressure lowering effect of 7.0±1.4 mm Hg.

A meta-analysis of the effect of garlic on blood lipids included 2300 adults showed that garlic, taken for longer than two months reduced LDL cholesterol by 10 percent, in people with slightly elevated levels. The reductions in blood pressure and cholesterol are associated with a 40 percent reduced risk of cardiovascular events.

Two clinical studies, conducted by Dr. Karin Ried also demonstrated that Kyolic AGE lowers blood pressure, by 9–12 mm Hg systolic and 6–7 mm Hg diastolic, in medically uncontrolled hypertensive patients. These reductions are similar to those achieved by blood pressure medication, and are associated with a 16–40 percent lowering of the risk of heart attacks and stroke. Two capsules daily, containing 1.2 g AGE were most effective. Kyolic Aged Garlic Extract is highly tolerable and no harmful interactions with other standard blood pressure medication were observed.

Dr. Toshi Ide pointed out, “One in three adults in the U.S. has high blood pressure, and one in four of these are on a medication but still do not have their blood pressure under control, or is otherwise known as uncontrolled hypertension. The beneficial effect of Kyolic AGE in lowering blood pressure will have a big impact on health specialists and the public.”

Immunity and Inflammation
Dr. Susan Percival, from the University of Florida, reported that in a randomized placebo controlled study with 120 healthy subjects, AGE (2.5 g/day) given for 45 days increase the proliferation of immune cells (natural killer cells) NK and a class of T cells, compared to placebo. When examined for colds and flu, the trial showed that AGE consumed for 90 days, reduced the number and severity of inflammatory cold and flu symptoms.

Diabetes and the Metabolic Syndrome
Advanced glycation end products are proteins or lipids that have become modified by contact with sugar. These harmful compounds can affect nearly every type of cell and molecule in the body and are thought to be a factor in aging, blood vessel complications in diabetes, atherosclerosis and other age-related chronic diseases.

Dr. Nasser Ahmed from Manchester Metropolitan University in the UK presented a study on 48 diabetic patients, finding that high doses of AGE inhibited oxidative stress and the formation of advanced glycation end products. “Since cardiovascular disease and metabolic syndrome often co-exist and share a number of risk factors, these findings have real-world applications for people suffering from these two diseases,” noted Dr. Toshi Ide.

Bottom Line
Additional information on garlic’s health benefits was presented by the international array of scientists in the 17 oral presentations and the 15 posters, further ascertaining the importance of garlic substances in protecting health and confirming that Kyolic AGE, the odorless form of garlic, should remain center stage in the diet, playing a role in controlling cardiovascular disease, metabolic syndrome, diabetes and a variety of age related conditions.