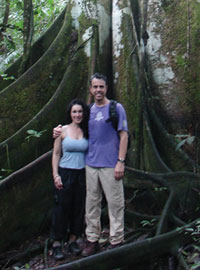 It is a pleasure to welcome Chris Kilham to the cover of TotalHealthonline. The following is excerpt from the introduction to Chris Kilham’s organization’s Web site: medicinehunter.com, and provides an excellent overview of Chris’ commitments over the past 20 years.

Harvesters, scientists, trade officials and other plant medicine experts in dozens of countries. This work always involves a collaboration of talented people. Plant medicines are used by over five billion people worldwide. Here you can gain an understanding of the role of plant medicines in the world. Chris and those he works with are dedicated to providing healing benefits, protecting the natural environment, and promoting the interests of traditional indigenous cultures. Currently, global health care is in crisis, the natural environment is undergoing widespread devastation, and indigenous people and their knowledge are disappearing at a rapid rate. What can we do to help? At Medicine Hunter we focus on traditional plant-based medicines and their sustainable trade as a way to contribute to a better world.”

Recently TotalHealthonline had an opportunity to dialogue with Chris after one of his standing room only seminars at a major health food conference.

Twip: Chris it has been an inspiration to follow your career from your pioneering commitment as a Medicine Hunter to being recognized today as a critical contributor to the imperatives of identifying, protecting and popularizing traditional plant based medicines.

Please share your journey from what you describe as a teenage hippie in the 1960’s to being recognized as a critical asset to the health of our community as well as an international proponent protecting the rights and natural environments of traditional peoples throughout the world.

Chris: First of all. I was a teenage hippie in the sixties, so I was very fortunate to encounter head on a cultural shift when people started a conversation about natural things being better. “Gee we really should be eating brown rice, meditating, practicing yoga, taking herbs, and learning massage.” I found myself in the midst of this movement and became part of it.

It was a very inspired period in recent cultural history and an important developmental time for me. I began delving into various natural lifestyle pursuits and finding them immensely rewarding and satisfying. And in the beginning when my friends and I were smitten by the idea of how things natural were better, we weren’t as well informed as people are today. But our intuition was exactly correct, and so I read what I could, went to the natural food stores, learned about the benefits of whole grains and beans, and eating seaweed. As time passed I realized I was completely committed to do work that was related to the healthy lifestyle sector.

Then I went to University of Massachusetts, and found a way to create an entire Holistic Health major as an under graduate. I studied nutrition, Chinese medicine and herbology, practiced massage, taught yoga, was a counselor, for credit. After that I worked in natural food stores, and read everything I could. Between then and now I attended seminars and learned from herbal experts. I began to travel always-taking time to ask about medicinal plants, and to enquire about traditional, natural remedies.

Now my career is primarily traveling the world and investigating natural medicinal plants in their indigenous settings, working and living with the native people. From Siberia to China, the Amazon Rainforest to the Middle East, learning about their plants and helping to develop trade. The whole idea as I envision it, is to provide people with better, safe, and effective health products. And to do so in a way that improves the natural environment and establishes trade in a manner that pays better wages and helps people instead of leaving them with their pockets empty.

What has taken place since I was a teenager is, we’ve made these gigantic leaps in knowledge. We didn’t understand the role of dietary fiber or the differentiation between soluble and insoluble fibers. We didn’t know about antioxidants or omega-3s, we didn’t know margarine was toxic; we were absolutely in our infancy. We did know sugar was bad for diabetics and beyond that diet seemed to play no role in health. People only studied nutrition so they could cook rice pudding for hospitals.

Steadily over time, we have assimilated more and more information about the ways we can deal with our health naturally, whether it’s through home spa treatments, yoga practice, or consuming super nutrients, any of a thousand things that the general public has now been exposed to. There’s been this revolution in dissemination of knowledge, about the ways we can personally empower our own health. We also understand much better now the grave dangers of pharmaceuticals. People are savvier. We now have high antioxidant beverages available at gas stations; we have whole grain cereals and herbs sold in every supermarket in the world. This is a gigantic revolution, driven by people’s desire to be in charge of their own health and by a fundamental core recognition that we are natural beings and so pursuing things natural rather than synthetic, toxic substances is nothing but a smart idea. Today I am also further fortunate in that I do an immense amount of media, I’m a regular on Fox news, I appear on Dr. Oz, and receive requests for numerous media interviews. Today, I’m in the even surprising position of having some influence on the internationally cultural conversations through this media exposure.

We’ve come along way from our humble origins. People have far greater access to the information they need more than ever before.

However, I don’t think the picture of what’s going on in our society is particularly rosy with the horrific rates of obesity, cardiovascular disease, cancer and diseases arising from our gross exposure to toxins. I think we are facing some immense and horrific challenges. At the same time, however, we are more knowledgeable in order to make informed choices.

Twip: You and I have talked a number of times about the tragedy of what’s happening to the indigenous cultures you visit today. If we fail to support their existence, do we stand to lose the benefits offered by the culture of all these groups as we go along?

Chris: Unfortunately that may be the outcome. We seem to be destroying them fast. Four million Amazonian natives had been killed by the early 1600s by the Europeans. Today virtually all-indigenous native groups face absolute alarming peril. I see these people on the ropes, very poor, struggling to survive, being increasingly marginalized, losing their cultures and traditions, moving to cities and becoming taxi drivers, waiters etc. They are losing all their natural skills, connection with nature and really leading increasingly desperate lives. You must realize three billion people in this world live on less than two dollars a day. And one billion live on less than a dollar a day. Many of those people work in agriculture providing the food and medicinal spices we use to live. I think the future for tribal groups and these rich traditions is extremely bleak. I don’t think too many people really care, I think it’s just a curiosity in people’s mind once in awhile. Most governments are asleep at the switch and these people suffer the consequences of petrol exploration, mining, timber industry, fishing corporations, and any number of extractive companies that just want to use natural resources until they’re gone. I think I’m a traveler witnessing the eleventh hour of tribal cultures around the world.

Twip: So basically if we cannot stop this travesty we will be compelled to rely on substances that are other than natural and more to the whole idea of prescription as opposed to supplemental.

Chris: Unfortunately, even if we wind up seeing a greater proliferation of herbal medicine, I think we’re going to wipe out these tribal groups and it’s very sad.

Twip: How important do you think that early education is on the importance of exercise, natural weight control, nutrition, and understanding there options as individuals? Do you think we are at a place where if everyone had the opportunity, it would be advantageous to look at who we are, where we are and how to better our lives? Would this work better than the route we’ve been on for the last 50 years?

Chris: Obviously, if we could make healthy choices that would be wonderful. People respond to role models. When I was a kid we all knew about the President’s Council on Physical Fitness and it wasn’t even a joke at that time. We had recess and PE in school, we were encouraged to go outside and play every day. We didn’t have things like X-box or sit on the couch. What are your cultural influences and who are your heroes? If they are rappers who are taking about dope, then that is what you’re going to aspire to. If on the other hand you’ve got people encouraging strength and personal inspiration, and determination...We had astronauts when I was a kid. We had people doing amazing things. I think this generation faces a landscape of fast food, mallculture, widespread cultural ignorance and a lack of people offering inspiring examples of healthy living. I think we definitely have fewer role models than we use too.

Twip: I couldn’t agree with you more. Tell me about Dr. Oz and others who are providing information to the greater community on how to achieve and maintain both personal and environmental health. How much of that is going on?

Chris: I’m working with Dr. Oz and Manny Alverez. I would say Oz is a phenomenon, he has emerged from the Oprah Winfrey promotional machinery in a superstar way. He is huge! He has enormous cultural power, is knowledgeable, and sympathetic to and supportive of natural approaches to health. He is an ardent advocate for all of it. And he has inspired millions of viewers who watch TV every day. I think a phenomenon like Dr. Oz could not have existed year’s ago. Dr. Oz is a cardiovascular surgeon and he still works on hearts. In the 80s we had Dr. Red Duke on PBS, but how many people actually saw him? This is a different time. Then you look at Dr. Manny Alverez who is the main medical Doctor on Fox News Network. I work with him all the time. Dr. Alverez’s specializes in obstetrics. He is head of OB at South Hackensack Hospital in New Jersey. Yet he does TV five days a week on segments like “what you should know about your blood pressure medicine, to cinnamon possibly being used to stabilize blood sugar.” These are people with enormous cultural power, able to reach millions of people, advocating the things we’ve been pushing for a long time. It’s a dream come true.

Twip: That’s impressive. We appreciate your time and it has been a real treat to work with you. We also recommend everyone to visit your Web site www.medicinehunter. com and take advantage of the media that you are doing. You and the people you’ve talked about are great role models. You have the ability to help others understand the value of becoming proactive in their personal quests for optimizing health.