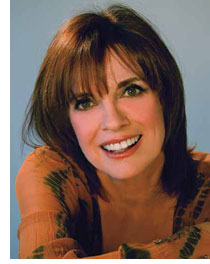 A few months ago our good friend and associate Takashi Shioya, innovator of the Tsunami T-Wave laundry capsules, suggested Linda Gray would be an ideal consideration as the cover personality for an upcoming issue of totalhealth. He stated the multi-faceted Ms. Gray has been a highly visible wellrespected member of the entertainment community for over 30 years. And that from her introduction to the American public as Sue Ellen in the popular TV series “Dallas” has transitioned from acting to producing and directing as well.

Ms. Gray has also been a U.N. ambassador to Nicaragua; is concerned with population growth, clean water, a proactive involvement in preserving and reclaiming the planet for our grandchildren’s children. As well as incorporating the imperatives of living green in her own life wherever possible. TH: Linda, welcome to totalhealth. I understand you just recently returned to the U.S.

LG: Thank you. Yes, I was attending a meeting on a movie I’m going to direct.

TH: Will this be a new experience for you?

LG: Yes. This is the first movie I’ll be directing. However, I have directed stage productions numerous times and even a few episodes of “Dallas.” I am pleased to have this opportunity. I believe we should be students, performers, teachers and advocates of and for the paths we choose to define our lives. Theater, film and television all inform, educate and entertain the audience. As performers we have a responsibility to our audiences.

TH: When did you first realize you were interested in acting as a career?

LG: Acting has always been one of my great loves. It began early and became solidified in high school and college. However, I really snuck in the back door. I started modeling and doing commercials and loved it. I was also participating in the theater and wanted to continue on that path. At the time I didn’t realize it was going to be a career for me. I just knew I loved it and my mom and dad were great in encouraging me to follow my heart.

TH: How did the opportunity to be considered for the role of Sue Ellen materialize? 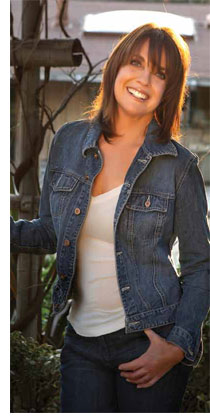 LG: It’s interesting. My modeling career was successful. I had married, had two children and was regularly doing commercials. And then I began to transition from modeling into acting. Shortly after my decision I started doing television work, it began with bit parts then a Norman Lear series. Then as fate or serendipity would have it the woman in charge of casting for the Lear series was also hired to cast the minor roles on “Dallas.” ( The part of Sue Ellen was never intended to become a major role on the series, so Sue Ellen was on her list.) Originally the part was to be cast with another individual, however my friend arranged for me to read. When the reading took place I knew immediately in my heart I had the role. I knew this part was absolutely right and there I was. So the good news was I was cast in “Dallas”— however, the bad news was we were going to Texas for two months and I had never left my family before for an extended period of time. It was the beginning of a wonderful experience which lasted 13 years. I guess I should say 30 plus years. “Dallas,” is still on, and it continues to be an important part of my life.

TH: Did you find when “Dallas” was finished it was a difficult transition back into being Linda Gray?

LG: It was a huge adjustment. Just as it was a huge adjustment when I was cast in the role. It was equally as difficult to get off that treadmill of 13 years and have it stop abruptly—even though we knew it was coming. You are used to a routine of getting up early every morning. I couldn’t sleep in. My body just expected to get up and going at 6:30 A.M. I didn’t have to wear makeup. I didn’t want any one touching me with a lint brush or a makeup sponge or doing my hair. I wore a pony tail and a baseball cap and no makeup. I just wanted a break. So that was great, I loved becoming me again.

TH: When did you begin to get reinvolved with the theater?

LG: Shortly after “Dallas.” I have always had a love for the theater. I also started doing Movies of the Week. One of the interesting results of being on a major series for that long is you have a high recognition factor which always helps ratings. I was also in a series called “Models Inc.” for Arron Spelling. Then I received a call from a friend who asked if I would like to play the psychiatrist in “Agnes of God” in the English speaking theater in Vienna. And I said I would love it. Because for me theater enhances the work that one does in film. It focused me. The part of the psychiatrist was totally the opposite of Sue Ellen. At that juncture I wanted a role that was totally different. I really enjoyed it and learned I wanted to do more theater.

Then I was asked to direct an adaptation of the film for the theater; “Murder in the First” which starred Kevin Bacon and Christian Slater. It was a court room drama and being a woman directing a play with all men was a challenge but an important episode in my life. I was pleased I had accepted the challenge.

Shortly thereafter I received a call from my manager who asked if I would be interested in doing “The Graduate” in London and I said of course. West End in London is the epitome of a career. So I traveled off to London. I was terrified but loved all three and a half months and had an absolute ball. I’m just back from six months in England in “Terms of Endearment” and had a great time.

TH: Don’t you find these challenges and the trials and opportunities that accompany them makes a positive impact on how an individual ages?

LG: Absolutely. Experiencing life and its challenges and rewards is exciting. It is up to each of us to capture these moments. We need to forge ahead and keep our passion alive. Whatever it is that you love make sure that you are doing it. Whether its gardening or making jewelry— find your passion.

TH: With all of the traveling how do you keep in shape mentally and physically?

LG: I have a homeopathic doctor who put me on a protocol which helped my digestion, memory and attitude. I have always been concerned about nutrition. I have an organic vegetable garden and grow tomatoes, zucchini, arugula, etc. However when I travel I have to be more creative. I don’t eat much. As Americans we tend to put a lot of food on our plates. In Europe they serve smaller portions. Also, I search out local health food stores and buy the best produce I can. During intermission I eat one and a half banana with almond butter or an apple for energy to get through the second half of the play.

TH: Linda, I understand you became involved in environmental issues long before we began to identify them as the imperative to living green. Please share with us your perspective on what we can do to live green both as individuals and members of a global community.

LG: For me it centers around a personal commitment and educating by example. You can’t put your life in other people’s hands; you need to be responsible for yourself. Dennis Weaver (of “Gunsmoke“ fame) and Gerry, his wife, helped me get my start in show business years and years ago. At that time he and Valerie Harper had committed to numerous programs aimed at raising public awareness and seeking solutions for critical issues which threaten to further jeopardize the quality of our environment.

Both Dennis and I served on a number of early environmental boards and still maintain our individual commitments to a healthier more sustainable environment.

On a personal note, in the early years I was kind of the odd man out. I have always had a vegetable garden. I began recycling long before it was popular. I was composting and using drip irrigation systems. I think it is a personal commitment as well as being involved in educating. I think people really want to do the right thing and they are just looking to be educated. Now that green is popular; for me it feels better to help on a person-toperson or personal example level.

TH: You have two grandchildren. What kind of responsibility do you feel we have as individuals to help our grandchildren be prepared for the world they are going to inherit?

LG: I often wonder whether I can be as optimistic as I would like to be about the world my grandchildren are going to live in. However, I believe there is a serious awakening today. The world is beginning and will continue to change for the betterment of its population. I am doing the best I can to be a positive part of that evolution. We all need to be involved.

There is a wonderful proverb I keep on my desk that says: The world wasn’t given to you by your parents. It was loaned to you by your children. To me that says it all. Okay we are here on the planet ready to hand it over to our children, but what have we each contributed to what we are going to hand over, whether it is to our children or grandchildren the responsibility is ours.

TH: Thank you Linda for your body of work over the past three decades. We look forward to sharing your future endeavors with us. Also for your example in and perspective of working toward a sustainable environment for our planet and our progeny who will occupy it over the next millennium.