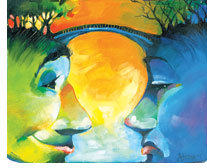 Susan and Bob were seated opposite me in my office. They were there because they could not agree on many family matters, including child-raising and money management. They constantly quarreled, engaged in power struggles, and endlessly blamed each other for trying to win the other over to their point of view. Consequently, the couple’s fights typically ended in mutual anger and emotional distancing, with both parties hurt from feeling misunderstood.

Sally, a mother attending one of my parenting workshops, angrily complained that Mary, her 13-year-old daughter, would consistently frustrate Sally’s efforts to teach her daughter how to prioritize her time so that all her homework would get done each night. Mary repeatedly ignored Sally and spent her after-school hours texting friends or playing on the computer, putting off her homework until just before bedtime when Mary would then complain she was too tired, had too much to do, and was (invariably) unable to complete all her assignments. Mary’s grades plummeted as well as her self-esteem. “Whenever we talk about how Mary needs to organize herself, Sally shared, “Mary withdraws, closes me out, and walks away; or she fights with me about it. I just can’t reach her and I feel like a failure as a mom.”

These two examples are typical wherever emotional power struggles exist in close relationships. Both parties need to be “right” and try to get the other to acknowledge and agree with their position. This mutual struggle to be right about any given issue is really a “proxy battle” in which both parties are seeking emotional validation from the other not just about their viewpoint but, more importantly, about their functional autonomy and personal integrity. Small wonder that the resulting friction from competing viewpoints leaves both feeling angry, misunderstood, and most importantly, isolated.

Being “right” and requiring that one’s viewpoint dominates is an attempt to control the situation and it always leads to an atmosphere of resentment, fear, anger and alienation for both. The solution to this dilemma lies in momentarily suspending our compulsion to be heard (and acknowledged) and attempting to understand where the person we are struggling with is really coming from. By putting one’s needs aside and intently listening and trying to understand the other, we create an opening in the power dynamics where mutual understanding can emerge.

Admittedly, this is tough to do, especially when we are filled with the powerful emotional need for validation. It often requires the so-called, “bigger person” to give in first, and be willing to listen to the other. By this generous gesture, the “giver” inherently imparts his open-hearted willingness to understand to the other, which is felt by the other and gives rise to feelings of empathy. Thus, in this simple act of giving the earlier energy of discord begins to dissolve, making way for the possibility of a mutual shared reconciliation and deepened trust.

In order to truly understand another person and be empathetic, it takes more than merely hearing them. What is required is to put one’s self in the others’ shoes. It is the capacity to identify and comprehend another person’s feelings and perspective. It is the total experience of being shoulder to shoulder, eye to eye, heart to heart, and toe to toe with another human being. With empathy, we attain knowledge of the other through direct personal awareness of their experience. Empathy penetrates deeper than reason, allowing us to acquire knowledge through the senses and the heart, not merely through the mind. Through empathy we are able to know another in a deep and pure way. When the person we are empathizing with senses our empathy towards them, they naturally let go of their defensive barriers.

We may worry that to empathize with our loved one means that we have to sacrifice our own self, since, by becoming totally present for another, we are asked to put our point of view or feelings aside; but this is not so. When we are empathic our sense of self paradoxically grows. When in empathy, we disarm our personal barriers towards another. We feel at one with another, our hearts automatically open and we ourselves become fuller, more expansive. It is as much an act of self-fulfillment as it is an affirmation of another. Our minds and hearts widen and as a result we feel less alone, less alienated, and more connected than before. Thus, the ability to experience empathy is the secret to personal happiness and to successful interactions.

In contrast, when we think only of ourselves — and our point of view, we become isolated and more burdened. We are, ironically, placing ourselves at an emotional disadvantage. By making our views paramount we inadvertently lose our ability to connect with those we care about. Without realizing it, in our demand that we be “right” we are actually unconsciously looking for empathy from the other. In that self-oriented mode our functioning is impaired as it prevents one from developing mutually nurturing relationships and experiencing genuine love. The Dalai Lama states that “me, me, me” people are the first to suffer heart attacks. He believes that those with “great open hearts” swim in an oceanic connectedness of emotional and physical well-being. For those who think only of themselves the ocean dries up and their relationships are destroyed.

Usually, the path to understanding and reconciliation has been through dialogue. However, dialogue has its limitations, as it does not allow us to fully comprehend another’s feelings or states of mind completely. We cannot step into their bodies, or hearts, nor see through their eyes. However, true understanding can be found in our imagination. By using our imagination we are able to see, feel, and know the person in a profound manner. We can share their experience and dispel the separation that still remains after we dialogue with them.

There is a tool called eidetic imagery, which is a profound method for emphatically seeing the person with whom we are struggling. It allows us to enter their experience and truly understand them. Eidetic image psychology has been developed by the leading theoretician in the field, Dr. Akhter Ahsen, who developed a method for unlocking the storehouse of images in our minds. Eidetic imagery is a scientifically based methodology that studies how images of our life experience, stored in our brains, affect our emotions, our minds and our bodies. When recalled, the eidetic image recreates a vivid experience of the people and events of our lives with clarity and detail and we can gain access to parts of our consciousness that otherwise would be locked away. It offers a powerful technique for developing empathy.

Examples:
First: Susan and Bob, the couple who were sitting on my couch, could not resolve their struggle about spending habits through conversation. As one began to talk the other would interrupt, with blame and recriminations. Neither was willing to suspend their point of view in order to hear the other. I asked Susan to see an image in her mind of Bob thinking about money. She closed her eyes and saw him sitting at his desk paying the bills. She saw concern on his furrowed brow and fear in his eyes. She got the distinct impression that he felt overwhelmed with working at his new business in order to meet their growing family’s needs. In seeing the image, Susan felt the worry and fear that Bob experienced within her own self. She suddenly understood that he was not miserly and controlling about her desire to go on a family vacation, but actually was afraid and inundated with responsibility. Her anger melted and she began to talk to him in a caring manner explaining to him how they could afford to go. She became more concerned about his feelings of fear and overwhelm than of her own vacation needs and thus, spoke to him with love.

Sensing the shift in her energy, Bob melted and allowed himself to speak about what was really bothering him. In this manner both felt closer to the other. Then Bob saw an image of Susan demanding a vacation with the family. He saw her tension and frustration because she had so much to do between raising the kids, the demands of the home and of her career. He saw and felt how tired she was. He understood how frazzled and depleted Susan was feeling. Bob actually experienced her exhaustion within his own body as he saw her image in his mind. He suddenly understood that Susan was not a spoiled, selfish woman but one who merely needed a rest and longed to spend time with her family in a meaningful way. Bob softened his rigid “no frivolous spending” stance as he wanted to help Susan relax. He understood that her needs and health were more important than saving every dime for some future (possibly disastrous) time. Susan, sensing Bob’s desire to give to her and his ability to fully hear her, relaxed her defensive stance and spoke openly about her growing exhaustion. Bob fully understood and conveyed to her that she was more important to him than money or anything else in the world. Through their image experiences both Susan and bob spoke to each other with loving-kindness as each now fully comprehended the other.

Second: Sally, the mother of 13-year-old Mary who complained about her daughter, pictured Mary in her mind’s eye to understand Mary better. She saw her daughter behaving in an obsessed and compulsive manner texting her friends and not paying attention to her homework. She could not understand why Mary was so obsessed because she was popular and had many friends. Sally then saw her daughter sitting at her desk doing homework. She saw her daughter’s face looking puzzled and tense. Sally sensed nervousness in her daughter and she understood that Mary was not feeling competent doing her work. Sally suddenly understood that her daughter was having difficulties understanding her schoolwork and was trying to avoid the resulting anxiety by texting her friends, etc. Mary’s issue was not about getting organized but basic academic comprehension; and that was why Mary did not respond to Sally’s attempts to help her get organized. After this empathic insight, Sally addressed the real issue with her daughter and found the right tutor to help her with homework.

Here is an eidetic image instruction in which you can visualize someone you wish to more fully comprehend.

Imaging is easy. Read the instruction below and allow an image to be formed in your mind’s eye. (Most people like to close their eyes, but you may keep them open if you prefer.) Don’t worry if your image is vague. An eidetic image has three parts: the image you see; subtle or overt body sensations or feelings that transpire while seeing the image; and meanings that may surface as you see the image. Relax and allow the images to unfold like a movie in your mind.