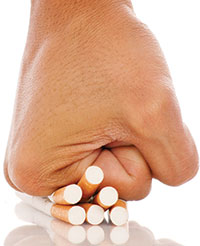 Someone makes you an offer they think you can’t refuse—they offer you a cigarette—but they get a Tony Soprano reply— “Fuhgeddaboutit!”—This is just how it has to be if you want to be a born-again nonsmoker!

Smoking addiction is a way of life that cloaks many complexities—it is orchestrated by the interaction of genetic, neurobiological, environmental and developmental factors. It is the principal preventable cause of death in the U.S. According to the Centers for Disease Control and Prevention, smoking in the U.S. accounts for close to half a million deaths each year.

One barrier to quitting is the fact that most smokers perceive themselves as being addicted for life, and it is this cerebral electric fence that can be the difference between staying addicted and breaking free.

During my quest for a protocol, I considered incarcerated smokers who have spent years in jails in certain countries around the world, where cigarettes are not available. When they were admitted they suffered the pangs and despair, but lived without cigarettes because they had no choice. So the advice I would give to all the would-be quitters who just believe it is completely impossible, is to think of those prisoners—whatever their genetic profile, biological, physiological and psychological condition, whatever their cultural background and life experiences were, and how ever many nicotinic cell receptors, misrouted and unbalanced chemical pathways and disrupted hormones they had—they had to, and did quit. And as for the non-prisoners, data from a U.S. National Health Interview Survey (1965–2005) and the American Lung Association (1997–2005), shows estimations that 45.9 million adults are former smokers (25.5 million men and 20.4 million women). Of course it was much harder for them because they had 24/7 cigarette access, so they should be kept in mind too!

Survival of the human race has always meant striving after “must have” natural rewards such as food, drink and sex. But the brain also craves unnatural rewards such as chemicals from smoking. This is because the body’s biological functions do not always differentiate between natural and unnatural substances. When there is an addiction to a stimulant such as nicotine or caffeine, the high level of stimulation generates regulatory changes in the brain cell receptor (docking) sites of brain cells for the chemical messengers: dopamine, epinephrine, and norepinephrine. Effectively, they begin to close down—and as a result, the addictee yearns for more of the nicotine or caffeine etc., just to feel normal and be able to get through the day.

There is one common chemical messenger in the body known as acetylcholine (pronounced: a-cee-til-coline). This connects with specific receptors in the cell called cholinergic receptors. These are widely spread throughout the body, and are of great importance as acetylcholine and its receptors are connected to numerous vital functions including: respiration (breathing patterns), maintenance of heart rate, and muscle movement. In addition, they generate the release of other chemical messengers which influence functions such as: appetite, mood and memory. Now, as the chemical make-up of the active form of nicotine is very close to the natural chemical messenger acetylcholine, the receptors are stimulated when they pick up nicotine molecules (just as in the same way a wrong key can sometimes open a lock). So, because of all the vital functions acetylcholine is connected to, you can imagine the dramatic effect.

When the body receives nicotine in small doses, the disruption to brain chemistry effects normal functioning by: increasing heart rate and blood pressure, increasing the concentration of various hormones, and increasing in the excitability of nerve cells—one outcome is that a smoker's body and brain are given some za-za-zoom—a power surge to begin or get through whatever they are doing. Conversely, when the body receives nicotine in high doses, regulatory mechanisms suppress acetylcholine. In addition, nicotine changes the normal cycle of endorphins (chemical messengers which bring on a state of exhilaration and tranquillity), making the body reliant on nicotine to control their release, and the feelings they bring. So basically, nicotine has the power to generate very diverse moods—and a fire station emergency yearning to reach out for a pack!

The first cigarette of the day which often and very detrimentally replaces breakfast, receives an enthusiastic response from the nerve cells within the brain, which react to the first nicotine rush of the day. (Readers who can successfully cut out this first cigarette of the day, and replace this cigarette breakfast will be quicker and far more likely to succeed in cessation). During the first few cigarettes of the day, nicotine stimulation increases the activity of dopamine—the feel good chemical messenger which affects the pathways in the brain that control reward and pleasure. The brain rewards and reinforces what it translates as beneficial behavior (in this case smoking). This leaves the smoker with a euphoric sensation of feeling up. However, what goes up must come down, and the high is followed by an inevitable rebounding low.

As the day moves on, the flow of nicotine does not have the same effect. This is because the nerve cells begin to become de-sensitised. Now the cigarettes generate less of a high, and smokers need to heavily reboot as they are compelled to puff away even more. The smoker's subconscious mind is completely blinded to the health calamities and the reality of a precarious future. It thinks in the here and now and it regards smoking as necessary as it translates the anxiety and withdrawal symptoms, which have built-up since the last cigarette into a danger which is threatening to the body. As humans have an instinctive biological survival of the species mechanism that is preprogrammed to reduce anxiety, the subconscious is automatically prompted to take action to lower the threat (i.e. lower the anxiety). So smokers impulsively react by doing something which relaxes and calms them—they light up! 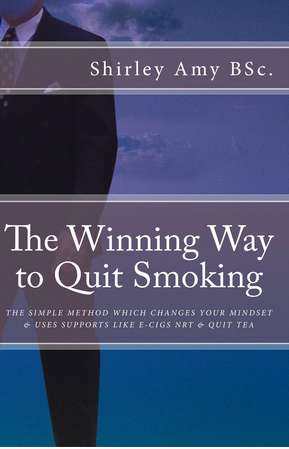 The protocol that I have introduced in my new book, "The Winning Way to Quit Smoking" is derived from a natural and holistic foundation. The Fuhgeddaboutit Method is named after the expression of Tony Soprano, the mafia boss of the HBO world-wide smash hit TV show, "The Sopranos." It incorporates health science, and embraces complementary therapy with an accent on biological regulation and the intrinsic healing of the mind, body and soul. Various elements integrate body regeneration, favourable genetic expression, anti-aging, hormone and chemical messenger regulation, and enhanced immune system functioning. Cutting down is slow and systematic over a period of around six months, until the Permanent Quit Zone is reached. There are numerous suggested back ups including: herbal patches, acupuncture, ear magnets, herbal cigarettes, flower remedies, and nutritional supplements; as well as the regular use of a hypnosis CD, and self-administered holistic therapy.

The first aspect that is addressed is detoxing—the gateway to good health, revitalisation and regeneration; and a means to help reduce cravings. Various methods are examined, with the aim of assisting the body to dispel heavy metals and other chemicals. Incredibly, there are over 7,000 chemicals in cigarette smoke. Of these, around seventy percent are carcinogenic, and hundreds are toxic. Health Cuisine is the next on the list. This is one of the most beneficial aspects of the protocol, as natural unprocessed food holds powers which assist self-healing and regeneration of the body's cells, tissues and organs. Simple changes to empower the body using optimum nutrition are put forward, and information on some of the pitfalls that keep smokers on the same path through their choice of food and drink, are addressed. It is an indisputable fact that food effects the way everyone feels and behaves, and a nutritional program which maintains a good blood sugar balance, not only boosts energy, it can also help to reduce cravings. The body's blood sugar levels are affected by a drug-type interaction produced by the stimulating effects of nicotine which causes the body to dispel its stores of sugar and fat. This explains the appetite suppressant powers of nicotine which affect the satiety (appetite control) center in the brain. Next up is the Stress Factor, which is brought on by the crescendos and decrescendos of smoking. A wide range of physical activities, new interests and hobbies, the use of aromatherapy oils, relaxation techniques, and home-based holistic treatments (including reflexology and Indian head massage) are suggested. Ways to improve mind management, strength and willpower are then called upon by looking at strategies to stay positive by: changing normal routines, saying no to frenemie crocodile smoking companions, and preparing a C diary. Smokers are then equipped mentally and physically to enter the Four Zones: The Prep Zone (4 weeks), The Cutting Down Zone (8 weeks), The Quit Zero Zone (16 weeks), and The Permanent Quit Zone. The final part of the protocol looks at weight gain and offers an insight into the effects of smoking and cessation on weight control, in order to put a successful plan into action. Exercise, supplements, and diet are considered, with an accent on having more plant based foods in order to heal the body and avoid gruesome calorie control!

The next time someone makes you an offer of a cigarette— you can say Fuhgeddaboutit! 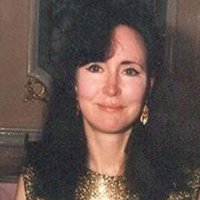 Shirley Amy, BSc, is an English nutritional and holistic health specialist with interests in optimum health, fitness, positive lifestyle change and worldwide research on the effects of biological aging caused by smoking and other negative lifestyle factors. She holds university and college qualifications in health science, nutrition, holistic therapy, aromatherapy and fitness training. Her book is "The Winning Way to Quit Smoking."