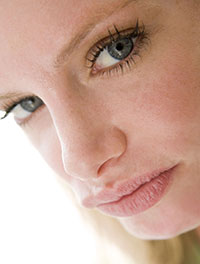 Stress, anxiety and depression are major factors in the lives of many of us. An estimated 9.1 percent of the population of the U.S. suffers from depression every year, which translates to approximately 28 million Americans suffering from depression for at least two weeks with significant symptoms each year. This figure does not include greater or lesser degrees of apathy. Major depression claims 4.1 percent of the population, which is to say, from 12 to 13 million sufferers.1

Even those who are not depressed according to the textbook definition often are not home free. All too often individuals find themselves on a “seesaw” in which they swing from frenetic activity to lethargy and back. Living habits, choices of foods and beverages, the lack of physical exercise and other everyday factors can play a big role in mood swings, but it can be hard to get back into balance once equilibrium is lost. Fortunately, the proper use of nutrients and herbs can go a long way towards helping us to “beat the blues” naturally without resorting to Prozac and other drugs, most of which have numerous and unpleasant side effects.

Examine Diet and Exercise Habits
Everyone is occasionally sad or discouraged, but this is not a normal state of affairs. The first area to consider when you find that your mood is often out of kilter is your diet. The second area to examine is your physical habits. Both are very important. For instance, most of us realize from our own experiences that getting some exercise and exposure to sunlight early in the day helps us to feel better.

Diets that are inadequate in terms of vitamins and minerals, and in some cases protein, often coincide with depression. Large amounts of sugars, refined carbohydrates and “junk foods” in general are just not sufficient to maintain good bodily health. If the overall quality of health is poor, it is unlikely that mental functioning and emotional wellbeing will fare any better. One of the virtues of the once highly popular “40- 30-30 diet” in which forty percent of the daily calories come from complex carbohydrates and the other sixty percent is derived evenly from protein and fats is that this diet forces us to consider closely the quality of the foods which we consume. Moreover, since some studies have shown that merely supplementing the diet with B vitamins and vitamin C can improve mood and mental functioning, a good balanced multi-vitamin and mineral supplement should be the backbone to any nutritional program.

The quality of the diet has to do not only with the nutrients included, but also with the “anti-nutrients” excluded. Two items in particular that are commonly found in the American diet can undermine one’s outlook on life. These are caffeine and alcohol. An intake of roughly 700 mg or more caffeine per day (about five cups of coffee) is often associated with depression and mood swings. Caffeine causes short-term increases in blood sugar levels that can be followed by dramatic downward fluctuations. Consuming caffeine, in other words, is yet another path to the sugar “rollercoaster” of energy ups and downs. Cutting out caffeine and refined sugars for as little as one week has been shown clinically to improve mood in many individuals complaining of depression.2 Consumption of alcohol before bedtime can have similarly distorting effects upon mood. This is because alcohol consumption interferes with the body’s natural production of melatonin and thereby disturbs the nature and restfulness of the night’s sleep.3

Increasing Important Brain Chemicals
The quality of both mental and emotional functioning is highly dependent upon special messengers in the brain, the neurotransmitters. These chemicals carry the signals between nerve cells. The most important brain messengers are serotonin, norepinephrine and dopamine. Antidepressant drugs, such as Prozac, strongly manipulate the levels of one or more of these neurotransmitters, generally with a plethora of side effects. However, it is possible to naturally boost and/or to stabilize the brain’s levels of various neurotransmitters without getting caught up in the pharmaceutical drug culture.

One method of improving mood that works for many is to provide additional quantities of the “building blocks” of the major neurotransmitters. This can be accomplished through the skilled manipulation of the diet or, and this is more convenient for most of us, it can be accomplished with dietary supplements. Serotonin, for instance, is made in the body from the essential amino acid L-tryptophan that is found in various foods. The intermediate step in serotonin synthesis involves 5-hydroxytryptophan, usually abbreviated as 5-HTP. In various clinical trials, 5-HTP has been shown to be both safe and effective in cases of depression originating from a variety of causes. The primary side effect found with 5-HTP is gastrointestinal upset at higher intake levels.4,5 Interestingly, 5-HTP has also been shown to be useful in cases of anxiety and not just in cases of depression.6 A natural or non-synthetic source of 5-HTP is the plant known as Griffonia simplicifolia. 5-HTP has been used for decades in Europe without any health issues being raised.

The best way to see if 5-HTP works for you is to start with 25 mg daily at one meal. Then, over the course of two weeks slowly increase the dosage to 75 mg taken with each meal if this amount is well tolerated. Finally, cut back the amount taken to whatever is adequate for maintenance for your particular needs. Typically, the trial period at the higher dosage range lasts for about two weeks, but it should be remembered that individuals vary greatly in their physiological requirements.7

Other useful nutrients for improving mood are the amino acids L-phenylalanine and L-tyrosine. Just as L-tryptophan is the precursor to serotonin, these amino acids are precursors for the production of the neurotransmitter norepinephrine. The conversion of L-phenylalanine and L-tyrosine to norepinephrine is enhanced by the actions of vitamin B-6, and therefore this vitamin is normally supplemented at the same time. Both of these amino acids have proven themselves useful in some forms of depression.8,9

The usual recommendation is to start with 500 mg L-phenylalanine upon arising along with 25–50 mg of vitamin B-6. (Take amino acids separately from meals.) If this is well tolerated, a second dose of both the amino acid and the vitamin can be taken prior to lunch. The amount of the amino acid (not the vitamin) can be increased by 500 mg increments up to an intake of as much as 2,000 mg twice per day. Dosages for L-tyrosine would be about one half this level. Phenylketonurics obviously should avoid L-phenylalanine in any of its forms. Those with high blood pressure should also use these amino acids only with caution. The usual side effects with too high a dosage are mild headaches, insomnia and anxiety. Cutting back the dosage quickly relieves any unwanted effects. Many individuals find that after a period of time, they can reduce their intake of the amino acids substantially and retain the benefits. Due to individual differences, it is not uncommon to respond better to one or the other of these amino acids.

Another nutrient, which should be considered, is S-adenosylmethionine (abbreviated as either SAM or SAMe). SAMe only recently has become available commercially in the United States in a stable and economical form, but its outstanding benefits have been recognized for years. These include amelioration of depression and migraine headaches, but also range to improving osteoarthritis, fibromyalgia and liver disorders.10 SAMe supplementation increases brain levels of serotonin, dopamine and phosphatidylserine, plus it improves the binding of these neurotransmitters to their binding sites. Numerous studies have shown SAMe to be effective in elevating mood and brightening subjects’ outlook on life.11 SAMe appears to be entirely safe under normal circumstances, although it can cause stomach upset in sensitive individuals when taken at higher dosage levels. (It is not recommended for those suffering from bipolar/manic depression.) The usual suggested intake is 200 to 400 mg taken one to three times per day before meals. Results are known to improve with sustained usage.

Herbal Solutions
Many herbs can exert significant influence upon our mood. Classic for their calming effects are chamomile, valerian and kava kava (do not combine kava kava with alcohol or acetominophen). Siberian ginseng extracts are energizers and mood elevators.12 A relatively unknown anti-anxiety herbal extract is the flavonoid called chrysin, the socalled “Flavone X” sometimes used by athletes. Chrysin, which is an extract of a member of the passionflower family, turns out to be a successful anxiolytic (anti-anxiety) compound that is very useful for combatting stress.13,14 The usual dosage is 500 mg to 1,000 mg taken with one to three meals each day for a total daily intake of between 500 and 3,000 mg.

No discussion of herbal mood boosters can be presented without mention of St. John’s Wort. This plant has a long history of improving not just mood, but wound healing and recuperation. In terms of neurotransmitters, St. John’s Wort maintains norepinephrine levels and may act as a natural MAO (monoamine oxidase) inhibitor, but one without side effects. Scientists have determined that hypericin, a constituent of St. John’s Wort,15 may be one active ingredient, but it now is known that other ingredients are perhaps even active. St. John’s Wort may improve brain levels of serotonin and dopamine along with those of norepinephrine by serving as a selective reuptake inhibitor for all of these.

As with other herbal compounds, the quality of the St. John’s Wort extract is extremely important. The clinical trials generally used extracts standardized to contain 0.125 percent hypericin, and subjects took 300 mg of this extract three times per day.16 This means that the product chosen should be close to this standard. For instance, on the one hand, a product with 250 mg of extract per capsule standardized to 0.14 percent hypericin would still be in the proper range, but capsules of the bulk herb would offer no assurance of benefits. On the other hand, since there may be ingredients other than hypericin, which are active, it may not be wise to invest in extracts that are above 0.3 percent hypericin. Indeed, recent research has shown that most or even all of the mood elevating effects of St. John’s Wort are due to the presence of the compound hyperforin, not hypericin. 17,18 Also, do not expect instant results. Most authorities suggest that significant benefits become apparent with at least four weeks of consistent use.

As you can see, there are many options for improving your mood and emotional outlook. Do not accept that the “blues” are a normal and inescapable part of life. In an earlier article entitled “Brain Nutrition Support,” the benefits of omega-3 fatty acids and other special nutrients are discussed and those supplements should be considered along with the items described here. By making the appropriate changes in diet and exercise habits and by finding the herbal extracts and supplements that are right for you, you can improve your mood naturally.