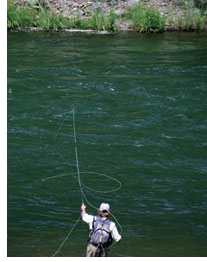 Most of us have heard of, and perhaps have even used, the phrase “stream of consciousness,” but what exactly does it mean? Typically, people use the phrase to describe a series of thoughts they have or statements they make which seem to flow automatically, from one to the other; and they are right to a certain extent. In 1892, William James, the famous psychologist, first used the term to describe the unbroken flow of thought and awareness of the waking mind. James defined this stream of consciousness as the full range of thoughts one experiences from moment to moment. As such, a stream of consciousness includes, in addition to one’s thoughts, all attendant sense perceptions, all of which intermingle with our conscious, and half-conscious experiences and random associations.

The notion of a “stream of consciousness” is also found in the early scriptures of the School of Mahayana Buddhism, which developed the concept into a theory of the mind. Mahayana Buddhists viewed the stream of consciousness as the mental attitudes, characteristics and events accrued throughout one’s life until—and perhaps after—death. This stream of consciousness was depicted as a changing stream of water that runs not only through one’s current life but also flows though a person’s many lives towards a mysterious destination. At times the stream runs freely and at other times it is obstructed as it encounters impediments along its way. Some streams are naturally calm and others more turbulent. Some move swiftly and others go slowly. Regardless of the philosophical basis of these Buddhist beliefs, this characterization rings true: our minds very much resemble the flow of a stream as our thoughts, feelings, impulses and potentials endlessly surge through our consciousness. Yet, our essential nature, like water remains the same.

James’ metaphor of the mind as a stream of consciousness and the Buddhist depiction of consciousness as a changing stream of water are further developed in the work of Dr. Akhter Ahsen, leading theoretician in the field of Eidetic Image Psychology. Eidetic images are visual pictures stored in our brains of all of our life experiences, which can be retrieved for future reference to be utilized in personal healing. Dr. Ahsen’s work is at the cutting edge of mind/ body psychology and is scientifically studied and researched in universities all over the world.

Dr. Ahsen illustrates how our lives can be seen as a running stream that flows towards a futuristic destination. This stream contains not only our thoughts, but also our life energies, genetics, intentions, powers, attitudes, histories, spiritual awareness and all that encompasses who we are. We can literally see an image in our mind’s eye of this stream, and glean accurate information about others and ourselves.

Our first contact with civilization occurs when we interact with our parents, who are also our first role models. They are the primary individuals responsible for shaping of our personalities as we grow, and the experiences we have with them and the images we form of them literally influences the content of our thought stream. Our parents are usually a mixture of positive and negative qualities because of the histories they themselves have experienced. If our parents are mostly loving, warm, nurturing and supportive their positive effects upon us enables us to live fully, expressing our deepest abilities. However, if our parents are cold, disapproving, controlling or injurious in any way, we grow in an environment polluted by their negativity, which compromises our own life energies. Most parents are a mixture containing attributes that both enhance and thwart us.

Confucius tells us that an image is worth a thousand words. That is why imaging brings so much revelatory information to light which, words can only partially describe. Below you will find the image of the Running Stream. The stream that you see is symbolic of your life energies, how you move through obstacles, the effect of each one of your parents on your psyche and your attitude about life.

The image instructions for seeing the stream given below will lead you through an experience that can reveal many things about your life. It also exposes two states of consciousness existing within all of us. The first is of our wholeness, which is the pure unadulterated nature that we were born with. The second is of our history and its effects upon our psyches. Our history includes all the positive life experiences that allowed our natural potentials to flourish as well as all the hurtful impositions, limitations and constraints that we experienced along the way.

We are all part of nature and we are all born whole and complete with all our potentials ready to flow out into the world with strength. However, just like a stream, as we move along life’s currents and interact with people, events can occur that pollute our genuine nature, leaving us with a myriad of emotional and physical problems.

Take a quiet moment and with eyes open or closed, whichever you prefer, read the first instruction and visualize the image in your mind’s eye. Then proceed to each of the subsequent instructions and precede step by step in the same manner as you go along.

As you see the images, you will notice that they each have three parts. The first is the visual image that you see which can be either vivid or vague. Second, you will sense an emotion, feeling or body response as you see the image. (For example, you may feel calm or excited, happy or sad. Each image has corresponding feelings or body sensations, which are unique to you.) Third, each image will reveal to you the meaning or understanding of what you are seeing. (For example, while seeing your mother standing in front of you, as you are the running stream, you may notice that your stream suddenly becomes less potent. The meaning or awareness that comes to you may be that your mother affected your life negatively by making you feel insecure. Or, you might see the opposite: her image makes the stream move more forcefully and a meaning will emerge from that. In some cases, the images of your parents may not change the way the stream behaves at all. Whatever that means to you will become evident as you see the images.)

Janet’s Stream
Janet is a married mother of two, working part-time in a real estate office. She saw her stream as running steadily along beautiful fields. She felt that this described the pace and manner in which she attended her daily activities. She then saw a deer in front of her drinking from the stream, which reminded her of how she nurtured her family. The obstacle in front of her was a big boulder, which the stream went around on both sides; however, once past the boulder, the stream continued with a lessened flow.

Seeing her father in front of her Janet described her awareness as follows: “The stream stops and pulls up. It is like he looms larger and larger and he gets in the way of me being a stream.” Seeing her mother in front of her she said, “The stream keeps flowing. It is free and strong. Mother appreciates the stream. I feel determined.” Janet realized that her father feared life having survived the Great Depression. Janet said that now she could see his effect on her life force. However, her mother was always supportive, allowing her freedom and self-reliance.

When Janet saw the whole world in front of her and was asked to feel “what will be, will be,” sadness came over her. She said, “I feel sad about my mother dying. She is old and the stream continuing to flow means that she will not be here someday.” When she saw history in front of her she responded, “The stream gets all polluted with ash in the stream. This reminds me that bad things do happen in life.” When asked to battle history as the stream, Janet said, “As I battle history I overcome history. It is my strong will that protects me and fights history. I do have some fear of dark forces who want to destroy the earth and its people, but my determination prevails in the image.”

When she ran through a negative situation and people she said, “It takes a while for me to get my power, but I do get it and feel it all over my body. It is my determination, which can handle anything no matter what happens. I run through negative people, like my boss and through constraints, prohibitions and other fears. I am afraid, but I have sense of power.”

In the end, I asked what Janet had learned about herself as the running stream. She said, “I have both my mother and father in me. I have inherited his fears as well as the positive determination that my mother provided. Even though I do get afraid I see that there is a lot that I can get through. Maybe some of my fear of the world is not just from my father, but because I survived breast cancer 15 years ago. So, I have the awareness of vulnerability that bad things do happen in life. However, I learned from this image that I could take it when a fear comes up and I can get through it. I can’t control the fear from showing, but I can control how I handle it. What gets me through is determination.”

We have all been injured living in this world, whether by our parent’s overt or subtle problems or through inevitable life events. The Running Stream Image allows you to experience your unadulterated life force, the origin of your weaknesses and strengths, and how you move through personal difficulties. The stream that you see represents your natural energies and no matter what adversities and obstacles you encounter that may weaken you, the stream always remains indomitable.

After experiencing the image, if you have any questions about your image responses, you can e-mail This email address is being protected from spambots. You need JavaScript enabled to view it. and I will be happy to respond to your query.