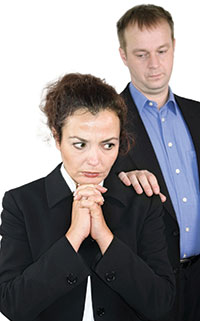 Author’s Note: I write a monthly column for Total Health focusing on Eidetic Image Psychology. But for the current issue, I decided to interview my husband, Richard Sussman, a psychotherapist and social worker who specializes in healing marriages and relationships scarred by infidelity. As we spoke, I became increasingly conscious of the difficult web of emotional and psychological factors that each partner faces when dealing with an affair. Based upon years of experience working with couples, his perspective encompasses a much more complex understanding than the conventional wisdom might suggest, moving beyond a framework of guilt and blame toward mutual compassion, understanding and trust. I hope that his insights will not only help couples currently struggling with the pain of infidelity, but will inspire everyone interested in strengthening the bonds of love.

Richard, how did you become interested in the subject of infidelity?
When new clients contact me in search of couples counseling, infidelity issues are by far the most common sources of inquiry. Curiously, the unfaithful partners tend to be women and men equally, which surprised me at first. I always knew that infidelity was a form of "acting out" to avoid deeper feelings and issues in the relationship, but the more I counseled couples struggling with unfaithfulness, I began to develop a more nuanced appreciation about why affairs happen in the first place. For nearly every couple that has entered my office, the problems that resulted in the affair were mutually created in some significant way. The most challenging part of the process.but the aspect that I find most rewarding—is helping both partners to view the affair as a mutual creation with joint, if not equal responsibility.

That might strike people as a bit unusual. Most of us believe that the blame for an affair lies entirely with the unfaithful partner.

What makes you say that it might be otherwise?
Sometimes, it clearly is one person's fault and not the other's. If, for instance, one partner suffers from sex addiction, or has some underlying problem with impulse control, then, of course, the other partner has done nothing to contribute toward the rift in the relationship. But the vast majority of the time, both partners have played some role in creating the emotional conditions that resulted in the affair. As difficult as it might be to hear this at first, the betrayed partner has almost always contributed to the situation, in a subtle and indirect manner. This can happen in any number of ways, including neglectful behavior, the inability to listen openly, being overly critical, or simply failing to give enough love and affection. In each instance, one partner's needs are not being met. The failure to communicate these issues and resolve them in a mutually satisfactory way leaves at least one partner feeling deprived, frustrated and unfulfilled. While none of these behaviors or emotional omissions justifies infidelity, over time such issues can open up the possibility of an affair. Unfortunately, many people simply don't know how to articulate their needs clearly or listen to their partners openly and without judgment.

How do couples get over the damage that infidelity inflicts upon their relationship?
As difficult as it can be to repair a relationship after an affair, if a couple wishes to salvage the relationship, a series of steps must take place. Other than permanently ending the illicit relationship, the unfaithful partner must also express genuine remorse for hurting the other partner. Most importantly, however, both partners must be willing to explore the causes and conditions that led to the affair in the first place. During the process of this exploration, the unfaithful partner must offer an unbreakable promise of fidelity. He or she must also be willing to tolerate the betrayed partner's deep expressions of hurt and rage, as well as the seemingly endless questions about the details of the affair and the nature of the connection between the illicit couple. Initially, these questions are necessary to assess the viability of continuing the relationship. This is the most volatile part of the process, but once it passes both partners are ready for the next and most important step: mutually exploring the underlying factors and circumstances that gave rise to the breach of trust. Were the unfaithful partner's needs too unrealistic to be met? If not, why was the faithful partner unable to meet them? What was the source of his or her resistance? Did the unfaithful partner insufficiently express the gravity of his disappointment or frustration? Why couldn't the difficulties be communicated and worked out together? This exploration usually reveals that both partners participated in the negative conditions that led to one of them having an affair. With this recognition, however, the intense atmosphere of blame and recrimination begins to soften; from here, with the appropriate guidance, an open dialogue founded in understanding and empathy can begin to take place.

Should you always tell your partner if you have been unfaithful?
If you have ended the affair on your own or, with the help of a therapist, there are advantages and disadvantages to admitting it. The main advantage is that by coming clean, your conscience is clear and the sense of wholeness and integrity in the relationship is restored. The disadvantage is that the confession might be so devastating to your partner that they can be seriously harmed emotionally or psychologically or, become so enraged that they become vengeful or violent. This is a decision that takes careful consideration.

In most cases, couples enter into therapy with the affair having been disclosed usually unintentionally with the unfaithful partner having been caught. Usually by this time, the affair has ended but, not necessarily so. If it hasn't, it must be terminated very soon after having entered therapy. No healthy partner will tolerate such a divisive situation for any significant length of time and no possible healing of the original relationship can occur as long as the affair continues. When a third person is involved, the unfaithful partner's commitment and dedication to doing all they can to restore the trust and integrity in the relationship is compromised without which, healing is impossible. Even as you explore the larger issues that resulted in the affair, can trust ever truly be restored after such a betrayal?

Openly discussing the deeper issues often results in new understandings and deeper empathy towards each other; this creates a renewed bond that inevitably leads to trust. Additionally, the new-found capacity for honest communication becomes a healing force in and of itself, whereby both partners learn to voice and listen to their respective needs. After a while, this practice becomes second nature to the couple; I tell my patients that once they have gone through the healing process and have sincerely completed the work of reconciliation, they will never cheat again. In this way, learning to communicate and address one another's desires eliminates any need to seek fulfillment outside of the relationship.

What are the prospects for success?
This depends on how you define success. Even if the couple ultimately decides to separate, due to some essential incompatibility that has been revealed through therapy, they will have left the relationship far better prepared for their next one. I consider that as a form of success. But, more to your point, if both members of the couple undertake the process of reconciliation with true dedication and openness, it is absolutely possible to rebuild a bond that will be far more profound and loving than before. In this way, infidelity doesn't necessarily mean the end of a relationship. In fact, it can represent a powerful new beginning and an invaluable opportunity for growth—not just for the partners as a couple, but as individuals as well.

Richard Sussman LCSW
For many years, Richard Sussman has worked with individuals and couples as a licensed transpersonal psychotherapist and clinical social worker specializing in the integration of Western psychology and Eastern spiritual traditions. He has served as the Co-Director of the New Haven Center for Gestalt Therapy, and was a core faculty member of the Gestalt Therapy Center in New York, where he trained and supervised professional practitioners. Richard treats a wide variety of issues, including anxiety, depression, guilt, grief, and self-esteem problems, with a special emphasis on healing relationship problems and marital infidelity.