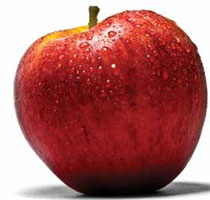 Apple pectin and polyphenol-rich apple juice have an anti-carcinogenic effect on the colon, encouraging the production of suspected chemo-preventative metabolite butyrate, say researchers. Butyrate is a short chain fatty acid (SCFA) that has been found to be a major factor contributing to healthy colon mucosa.

The study, published in the April issue of Nutrition, looked at human fecal matter fermented with apple constituents and found a significantly increased yield of SCFA, most notably butyrate.

“Butyrate not only serves as a major nutrient for the colon epithelia but is also thought to play an important role in the protective effect of natural fiber against colorectal cancer,” said the German research team, led by Dieter Schrenk.

This is the not the first study to find benefits of fruits in cancer prevention and treatment. A recent study in California found low doses of freeze-dried grape powder could inhibit the development of colorectal cancer thanks to the polyphenol resveratrol and synergistic effects between the grape compounds.

The Study
Fecal slurry from healthy individuals was fermented with apple constituents, such as apple pectin and apple juice extracts that were high in polyphenols. The samples that were fermented with pectin were rich in butyrate and the scientists concluded that this assisted in colon health because of its effect on histone deacetylases (HDAC).

When the butyrate content was high, HDAC was inhibited. With slower production of HDAC, there would be significantly less growth of precancerous and tumor cells. Fermentations with pectin were very active in HDAC inhibition in nuclear extracts prepared from the colon tumor cell lines HT-29 and Caco-2 and in intact HeLa Mad 38 cells bearing a reporter gene driven by HDAC inhibition.

Combined incubations of pectin with apple juice extracts resulted in effects similar to those with pectin as the only substrate added.

The researchers concluded that butyrate is the most relevant HDAC inhibitor formed in fermentations of human fecal slurry with apple pectin, whereas addition of apple juice extracts leads to the formation of butyrate and other HDAC inhibitors, which are as yet unknown. The study presents some sound findings to act as a base for further study into colon cancer prevention, which is the third most prolific type of cancer in western industrialized countries, causing 650,000 deaths a year.

NOTE: Apples are one of the most pesticide riddled fruits. Please choose organic where possible.