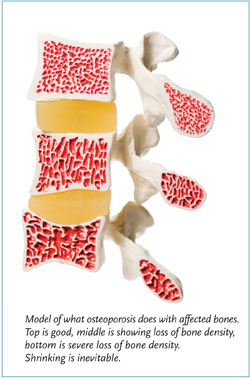 What Your Father Never Told You

Ask the average American man what his greatest health concerns will be as he ages, and his answer would likely be drawn from a familiar list: heart disease, prostatic hyperplasia, prostate cancer, osteoarthritis, erectile dysfunction. Few would list osteoporosis, the degenerative skeletal condition that is generally considered a “woman’s disease.” Most would be surprised to learn that the prevalence of male osteoporosis is close to that of prostate cancer; about 20 percent of the 10 million Americans with osteoporosis are men. Men account for over a quarter of all osteoporotic fractures annually. It is estimated about 25 percent of men will suffer an osteoporotic fracture in their lifetime, more than the estimated 16 percent that will be diagnosed with prostate cancer. Yet, male osteoporosis remains a relatively over looked condition that is poorly understood amongst men. For example, on the National Health and Nutrition Examination Survey (NHANES) only one percent of male survey takers over 65 reported they had osteoporosis; bone mineral density (BMD) testing revealed that four times as many actually had the disease. In this article, we will briefly discuss the progression of male osteoporosis, its specific risk factors, and potential treatments.

What is Osteoporosis?
Osteoporosis describes a condition of improperly or incompletely crystallized bone tissue. This results from an imbalance in bone remodeling. Remodeling is a critical process in bone metabolism that involves the removal (resorption) of older bone tissue and its replacement with an equivalent amount of pristine bone at the same site. Remodeling becomes an important mechanism for repairing damage from repeated stress on the skeleton, and is vital for removing older bone tissue, which has lost its resilience. Resorption also serves as a means for releasing calcium or phosphorous when there is a dietary deficiency. Bone remodeling continues in such a fashion that most of the adult skeleton can be replaced about once per decade.

The maintenance of a static density and mass of bone depends on the balance of bone synthesis by bone-building cells (osteoblasts) and bone-resorbing cells (osteoclasts). Equivalent levels of activity by both cellular processes allows for consistent bone remodeling and the optimization of the bone’s physical properties. A shift of this equilibrium towards synthesis adds new bone; a shift towards resorption results in net bone loss. If bone resorption were to progress unchecked, or if the bone formation process were somehow hindered, then bone would begin to lose minerals, leaving porous bone matrix. The less-dense “spongy” bone (trabecular bone) that predominates in the wrist, spine, and hip becomes thinner and weaker, with less mechanical strength and a higher probability of fracture.

For practical purposes osteoporosis is defined as bone mineral density (BMD) of more than 2.5 standard deviations below the mean for a 30 year old individual of the same sex and ethnicity (called the T-score), which translates to a bone mass approximately >30 percent less than average. A pre-osteoporotic state of low bone mass (traditionally referred to as osteopenia), describes a BMD that ranges 10 – 30 percent below average and has some increased risk of fracture. The most common osteoporotic fractures are those of the spine (27 percent of all fractures); common non-vertebral fractures occur at the wrist (19 percent), hip (14 percent) and pelvis (7 percent). These fragility fractures are responsible for decreased quality of life due to pain and loss of mobility. Hip fractures are especially problematic; they increase the risk of additional hip or vertebral fractures by over two-fold, and about half of patients experiencing hip fracture will experience long-term loss of mobility. Hip and vertebral fractures also carry an increased risk of mortality, especially in men. Within six months of a hip fracture, the mortality rate is about 10 – 20 percent; about one-third of men will die within a year of hip fracture. Loss of independence is also more likely in men who survive hip fractures than in women.

Primary and Secondary Causes of Osteoporosis in Men
Primary osteoporosis is the cumulative loss of bone mass with age, as one experiences changes in sex hormone levels. Although men do not usually experience a sudden decrease in sex hormone production as do women during menopause, levels of testosterone in men begin to decrease as early as age 30, and can drop at a rate of 0.8 percent per year. Testosterone, one of the main androgens in men, is responsible for regulating not only secondary sexual characteristics, but also body composition, including lean body mass and bone mineral density. Like estrogen, testosterone signals osteoblasts to build new bone, while inhibiting the bone-resorption by osteoclasts. Androgens also stimulate the mineralization of bone, and indirectly stimulate the mechanical loading of bone (the stress on the skeleton, as experienced during exercise, that increases the synthesis of new bone). Low testosterone levels, not surprisingly, are associated with increased prevalence of osteoporosis and greater fracture incidence (particularly of the hip) in older men. Testosterone is also a source of estrogens in men (by conversion through the activity of the enzyme aromatase); low estrogen levels in men are also associated with lower bone mass.

As is the case for women, low body weight, smoking, Caucasian race, limitations in physical activity, and history of previous fractures are also risk factors for primary osteoporosis in men. Inadequate calcium consumption, increased calcium excretion, and insufficient serum vitamin D levels are additional well-established risk factors for primary osteoporosis. Other dietary risk factors, such as soft drink consumption, low phosphorus, and high dietary acid load are beginning to gain more attention for their ability to push bone metabolism towards resorption in women; it is not unreasonable to expect these factors may present risks in men as well.

Secondary osteoporosis results from specific medical conditions, diseases, or medication use. Although less common in women (20–30 percent of cases), secondary osteoporosis may account for over half of the cases in men. Frailty fractures or low BMD in younger and middle-aged men can be indicative of this disease. Most causes of secondary osteoporosis are similar between the sexes, and include endocrine disorders (diabetes and hyperthyroidism), gastrointestinal disorders that interfere with nutrient absorption (bariatric surgery has emerged as a condition which may double fracture risk), chronic inflammatory diseases (such as rheumatoid arthritis or lupus), and certain medications (particularly glucocorticoids and immunosuppressive drugs). Male hypogonadism (sudden drops in androgen levels) is a major risk factor for secondary osteoporosis, likely through the mechanisms mentioned above. Hypogonadism is a common side effect of the androgen-deprivation therapies that are the mainstay of prostate cancer treatments, and can result in significant bone loss. Alcohol abuse may be a more prevalent risk factor for decreased BMD in men than in women; low bone mass is common in men who seek medical help for alcohol abuse. Moderate alcohol consumption (perhaps up to 29 g/day; there is not a real definition for “moderate”), however, has been associated with a healthy BMD in multiple studies.

Treatment of Osteoporosis in Men
Despite its prevalence, osteoporosis in men has been relatively overlooked by researchers; therefore, most of our understanding of the disease has been derived from studies of the disease in women. Accordingly, studies of osteoporosis treatments in men are smaller and fewer in number than those in women. Calcium and vitamin D supplementation, often in conjunction with bisphosphonate drugs, has been the standard protocol for treatments of primary and secondary (hypogonadal men or those on androgen-deprivation therapy) osteoporosis. Testosterone supplementation therapy has been proven effective at increasing BMD in hypogonadal men, but requires consistent monitoring for increases in hormone-related cancer risk. Nutritional and lifestyle modifications (such as increased exercise and smoking cessation) are important practices for lowering fracture risk. It is unclear whether the bone-promoting activities, other well-characterized nutrients (such as the K vitamins, potassium, or trace minerals like silicon, boron, and manganese) will be as effective in men as they have been in women; this is certainly an important area for future scientific study.

Summary
Osteoporosis in men, although surprisingly common, is a frequently overlooked consequence of the aging process. It shares many of the same causes and risk factors as it does the condition in women. Secondary causes of osteoporosis (particularly prostate cancer therapies and alcohol abuse) are a more common cause of the disease in men, and require additional considerations for their successful management. It is hoped as male osteoporosis becomes more recognized and better understood amongst practitioners and patients, research into its causes and effective treatment will increase accordingly.