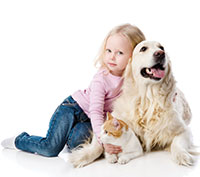 This month we conclude our series on Autoimmune Disorders in pets. The final article discusses the best type of fatty acids to use for your pet’s inflammatory issues.

FATTY ACID SUPPLEMENTATION
Is supplementation with fatty acid capsules or liquids the best approach, or is dietary manipulation preferred for the treatment of inflammatory conditions? There are, in fact, diets constructed with this “ideal” ratio (of omega-6 to omega-3 fatty acids). For owners who do not like giving their pets medication, or for those pets that don’t take the fatty acid supplements easily, it might be wise to try some of the medically formulated diets (available from you pet’s doctor) that contain the fatty acids. (However, because these medicated diets may not be as natural as possible due to the inclusion of byproducts and chemical preservatives, holistic pet owners may need to try other options.) These diets, often prescribed as anti-inflammatory diets for pets with allergies, may be useful as a part of the therapy of autoimmune disorders in pets.

FISH OILS
Since fish oils can easily oxidize and become rancid, some manufacturers add vitamin E to fish oil capsules and liquid products to keep the oil from spoiling (others remove oxygen from the capsule.)

These supplements can be used in conjunction with conventional therapies, as they are unlikely to be effective by themselves in most patients. The natural treatments are widely used with variable success but have not all been thoroughly investigated and proven at this time. As with any condition the most healthful natural diet will improve the pet’s overall health.

OTHER NATURAL TREATMENTS
Other therapies that can be tried include the herbs alfalfa, yellow dock and cordyceps mushrooms.

CONVENTIONAL THERAPY
Specific therapies vary with the disease. In general, conventional therapies rely on immunosuppressive medications such as corticosteroids or stronger chemotherapeutic drugs to decrease the overactive immune system.