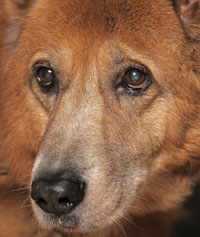 THERAPEUTIC USES
A study in the 1998 journal, Osteoarthritis and Cartilage, reported that chondroitin sulfate is an effective treatment for osteoarthritis. Because chondroitin production by the body decreases with aging, supplementation with this compound may be especially helpful for older pets with arthritis.

SOURCE
Animal cartilage is the only dietary source of chondroitin.

SCIENTIFIC EVIDENCE
For years, experts stated that oral chondroitin couldn’t work because its molecules are so big that it seemed doubtful they could be absorbed through the digestive tract. However, in 1995, researchers laid this objection to rest when they found evidence that up to 15 percent of chondroitin is absorbed intact. Another study found that up to 70 percent of radio-labeled chondroitin sulfate was well absorbed and showed affinity for articular (joint) cartilage. This evidence for chondroitin absorption holds true for pets as well as people.

The effect of both oral and injected chondroitin was assessed in rabbits with damaged cartilage in the knee. After 84 days of treatment, the rabbits that were given chondroitin had significantly more healthy cartilage remaining in the damaged knee than the untreated animals. Receiving chondroitin by mouth was as effective as taking it through an injection. It appears quite likely that chondroitin can slow the progression of osteoarthritis. However, more studies are needed to confirm this very exciting possibility. It would also be wonderful if chondroitin could repair damaged cartilage and thus reverse arthritis, but none of the research so far shows such an effect. Chondroitin may simply stop further destruction from occurring.

Chondroitin is often added to supplements containing glucosamine. While significant studies are lacking, some doctors (but not all) feel adding chondroitin to glucosamine enhance the ability of both substances to repair cartilage due to a synergistic effect.

SAFETY ISSUES
Chondroitin sulfate, like glucosamine, has not been associated with any serious side effects. Mild digestive distress appears to be the only real concern in people and possibly pets.