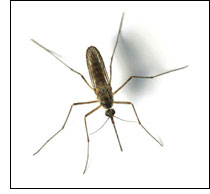 Heartworms are caused by the parasite Dirofilaria inmitis and are transmitted by the bite of the mosquito. When a dog or cat is bitten by a mosquito infected with heartworms, the immature larvae carried by the mosquito enter through the mosquito bite in the skin. From the site of the mosquito bite, the larvae continue to molt and travel through the pet’s body. Approximately six months after infection, the mature larvae enter the pet’s heart and pulmonary vessels in the lungs and finish their maturation into adult heartworms. In dogs, most of the worms reside in the pulmonary vessels of the lungs (except heavy infections, where the worms can live in pulmonary vessels, the heart and the vena cava); in cats, due to a lower number of worms, the heartworms are mostly likely to reside in the heart.

Diagnosis of heartworm infections in cats is more difficult, as cats usually do not harbor microfilaria and have fewer worms in their bodies than dogs. In cats, diagnosis can be made through a combination of tests, including occult testing for antibody and antigen detection, chest radiographs (x-rays), CBC, blood chemistry profile, and cardiac ultrasound.

HEARTWORM INFECTION/DISEASE IN CATS VERSUS DOGS

Here are some key differences in heartworm infection/ disease of dogs and cats.

OTHER NATURAL TREATMENTS
There are several protocols listed in the holistic literature for the treatment of canine heartworm infection/disease. Unfortunately, no controlled studies, showing their effectiveness have been completed, although the veterinarians who use these protocols have reported success in some cases. Many of these cases have not been followed long-term, and many holistic practitioners do not recommend them due to their questionable effectiveness. In some protocols, the dogs were also placed on monthly heartworm preventative medication (Heartgard®), which has been shown to actually kill adult worms after continuous usage, making interpretation of results from alternative treatments difficult. Some protocols also make use of more toxic herbs such as wormwood and black walnut.

For owners who wish to try one of these protocols, they must be administered under strict veterinary supervision to minimize toxicity. Pets should receive regular follow-up testing (occult heartworm tests) to determine effectiveness (or lack of effectiveness) if an alternative protocol is used. For owners who wish to use the conventional medical therapy combined with some type of complementary therapy, patient support (of the heart and liver) can be accomplished by various nutritional supplements and herbal preparations. Support of the heart and liver with herbs and glandulars can be beneficial in supporting the patient during conventional treatment.

Diatomaceous earth, while reportedly effective for helping control some intestinal parasites, is not effective in preventing or treating heartworm infection/disease.

These protocols can be used in conjunction with conventional therapies as they are unlikely to be effective by themselves in most patients. The natural treatments are widely used with variable success but have not all been thoroughly investigated and proven at this time.

As with any condition, the most healthful natural diet will improve the pet’s overall health.

CONVENTIONAL THERAPY
In the past, an arsenical (arsenic-containing) medication called Caparsolate was the only medication available for treating heartworm infection in dogs. While it is effective, there is very little difference in the treatment dose and the toxic dose, making it imperative that the medication be carefully administered. Additionally, the compound was very caustic and had to be given intravenously. If any of the four required doses of Caparsolate leaked out of the vein, severe damage to the surrounding tissue was possible.

While there are still some veterinarians who use Caparsolate, a newer product called Immiticide® is currently considered the treatment of choice. The medication is safer than Caparsolate, requires only two injections, and the medication is designed to be given intramuscularly rather than intravenously.

Heartworm treatment is safer in dogs that are infected but not suffering from heartworm disease. Pre-treatment diagnostic tests (chest radiographs, urinalysis, and blood profiles) are necessary prior to treating dogs infected with heartworms or showing signs of heartworm disease to minimize side effects from therapy.

Treatment of cats with heartworm infection or disease presents some difficulty. Neither Caparsolate nor Immiticide is approved for use in cats. Additionally, cats with heartworm disease are likely to suffer potentially fatal pulmonary embolisms after treatment with Caparsolate (estimates are that 30 to 50 percent of cats treated for heartworm infection/disease are likely to experience life-threatening crisis within three weeks of treatment). Many doctors choose supportive care (usually corticosteroids) for the vomiting or asthmatic-like signs seen in cats with heartworm disease rather than treat cats with Caparsolate or Immiticide, due to the shortened life expectancy of heartworms in cats as compared to dogs and the potential for adverse reactions when using the conventional medications in cats.

Homeopathic heartworm nosodes have been suggested as an alternative to conventional medication to prevent heartworm disease. No studies are available suggesting their effectiveness.