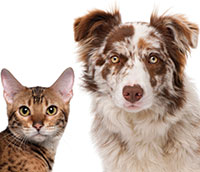 Epilepsy is the most common cause of seizures in pets. Anticonvulsant medications such as phenobarbital, diazepam, or potassium bromide are commonly prescribed conventional medications.

Correcting the diet is important, as there is anecdotal evidence that food hypersensitivity may be the cause of seizures in some pets. A small number of cases treated concurrently with anticonvulsant medicines plus antioxidants (at the dosages used for treating allergic dermatitis) have shown promise and allowed a reduction or elimination of seizures. While more cases must be treated before any conclusions can be reached, using antioxidant vitamins and minerals may be helpful in selected patients with epilepsy.

Inflammatory Bowel Disease is a common cause of vomiting, diarrhea, and weight loss in dogs and cats. The cause is unknown but is speculated to be an immune reaction to a local hypersensitivity in the digestive tract. Conventional treatment of inflammatory bowel disease usually involves corticosteroids and antibiotics such as metronidazole or tylosin; occasionally, other chemotherapeutic agents are needed for those cases that fail to respond to the initial therapies.

As with other conditions, the initial approach to orthomolecular therapies involves a hypoallergenic diet free of by-products, chemicals, preservatives, fillers, and artificial colorings and flavorings to decrease potential hypersensitivity within the gastrointestinal tract. Antioxidant therapy using the same protocol as for allergic dermatitis and epilepsy is the mainstay of treatment. Ascorbic acid is not used due to its cholinergic effect on the intestinal tract, which can worsen diarrhea.

Canine Hip Dysplasia is most common in large breed dogs (although hip dysplasia can occur in any breed of dog or cat). The exact cause is not known, but a combination of genetics and environmental influences (such as high-calorie diets in rapidly growing puppies) contribute to dislocation of the hip joints. Conventional therapy may involve medical or surgical therapy, or both. For young puppies with moderate to severe dysplasia showing clinical signs, surgical correction (such as total hip replacement) may be recommended to eliminate clinical signs, remove the source of inflammation and pain, and prevent secondary osteoarthritis. Puppies with mild dysplasia, as well as very old dogs who may not be candidates for surgery for a variety of reasons, are treated medically with corticosteroids and non-steroidal anti-inflammatory medications such as Rimadyl and EctoGesic.

Orthomolecular medicine suggests using ascorbic acid as part of the therapy. Ascorbic acid is utilized for collagen synthesis; collagen is the connective tissue necessary for proper muscle, cartilage, bone and ligament formation. Usually, ascorbic acid or vitamin C makes up part of, rather than the total, complementary approach to treating hip dysplasia.

A controversial report in 1976 described using ascorbic acid in pregnant female dogs to prevent hip dysplasia in puppies. The study looked at eight litters of puppies from German Shepherds who either had dysplasia or produced litters with puppies afflicted with hip dysplasia. No signs of dysplasia were seen in puppies when the pregnant bitches were administered megadoses of sodium ascorbate (doses administered to bowel tolerance) and the puppies were kept on a similar regimen. This study has been criticized by conventional veterinarians for two reasons: first, only a small sample size (eight litters) were utilized, with a small number of parent dogs. Second, long-term follow-up studies (radiographs, orthopedic manipulation of the hip joints, and so forth) were not done. Still, while more studies would be necessary to confirm these initial results, this study suggests that providing sodium ascorbate to pregnant dogs and their puppies may allow sufficient amounts of collagen to be developed to prevent the joint instability that is seen in dogs with hip dysplasia. If the results of this study were repeatable and proved valid, environmental factors that can contribute to hip dysplasia (rapid growth, high calorie diets, excessive exercise) would also need to be avoided to prevent environmental influences.

Feline Gingivitis-Stomatitis is a condition in which cats, and rarely dogs, develop severe inflammation and/or infection of the gums and surrounding oral tissues. The cause of this painful condition is unknown but appears to be a severe immune response to oral antigens. Because cats with feline leukemia virus or feline immunodeficiency virus infection may present with chronic dental disease of gingivitis, cats with recurring gingivitis, stomatitis, or dental disease should be tested for these immunosuppressive viral infections.

Traditionally, many cats can be treated conventionally with frequent dental cleanings, oral antibiotics, and corticosteroids. In severe cases, cats need all teeth exacted to cure the condition. Orthomolecular therapy involves administration of high doses of vitamins A, C, and E, and selenium to improve cell-mediated immunity and decrease local oxidation that may contribute to destruction of the oral tissues. The antioxidants are administered locally and may also be rubbed onto the gums.

Dental cleanings (as needed) and administration of antibiotics and/or corticosteroids are administered as needed at the start of therapy and during any flare-ups. A small number of cases have shown significant improvement when other conventional therapies have failed.

Safety
Owners should not diagnose and treat their pets without veterinary supervision. Many medical disorders present similar symptoms. Also, megavitamin therapy can be toxic if not used properly.