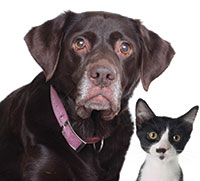 The pet food industry relies on recommendations by the National Research Council (NRC) to prevent diseases caused by nutrient deficiencies in the “average” pet; yet, the NRC has not attempted to determine the optimum amount of nutrients or their effects in treating medical disorders. While a minimum amount of nutrients may be satisfactory in preventing diseases caused by nutrient deficiencies, it is important to realize that there is no “average” pet, and every pet has unique nutritional needs.

It is unlikely that our current recommendations are adequate to maintain health in every pet. Each pet has unique requirements for nutrients. Additionally, these needs will vary depending upon the pet’s health. For example in times of stress or disease additional nutrients above and beyond those needed for health will be required. Orthomolecular medicine evaluates the needs of the pet and uses increased nutrients to fight disease.

The principles of orthomolecular medicine, summarized below, are adapted from “Orthomolecular Medicine: A Practitioner’s Perspective,” in Complementary and Alternative Veterinary Medicine: Principles and Practice, Mosby, 1998.

Orthomolecular medicine has shown promise in treating a variety of medical disorders. These disorders and the recommended therapies are described below.

Orthomolecular therapy of feline leukemia utilizes 750mg of sodium ascorbate, 750 IU of vitamin A, and 75 IU of vitamin E. A number of cats on this protocol tested negative for leukemia virus within two years of initial diagnosis on both ELISA and IFA tests. Also, many cats displaying signs of chronic illness became devoid of symptoms. Since false negative test results are possible, all cats that tested negative on blood ELISA testing treated with orthomolecular therapy should have follow-up IFA testing done.

Next month we will discuss more therapeutic uses of orthomolecular medicine for diseases.

Safety
Owners should not diagnose and treat their pets without veterinary supervision. Many medical disorders present similar symptoms. Also, megavitamin therapy can be toxic if not used properly.