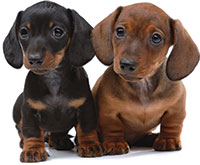 OTHER NATURAL TREATMENTS
Variable success with mange can be achieved with a natural diet, homeopathic sulfur, and the herbs garlic and Echinacea. For ear mites, mullein flower oil or yellow dock and reishi mushrooms can be tried.

These can be used in conjunction with conventional therapies, as they are unlikely to be effective by themselves in most patients with severe disease. The natural treatments are widely used with variable success but have not been thoroughly investigated and proven at this time.

As with any condition, the most healthful natural diet will improve the pet’s overall health.

CONVENTIONAL THERAPY
Most conventional therapies for demodectic, sarcoptic, and notoedric mange require medicated dips of shampoos. Despite the potential toxicity and side effects that can occur with some dips, most are administered safely to the majority of pets with mange. The drug ivermectin can be used for most types of mange, but it is toxic at the dose required to treat mange in Collie-type dogs. Ear mites can be treated with oral or injectable ivermectin or topical drops (which can be administered for four weeks along with some type of body treatment, usually a flea spray, to effectively break the mite life cycle and kill the mites).