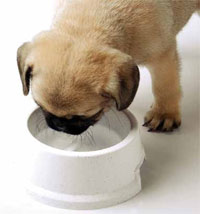 Oxygen is the only nutrient that is more important to sustaining life than water. Your dog could live for weeks without food, but would only last a few days without water. Approximately 60 percent of your dog’s total weight is water. That means if she weights 50 ponds, then 30 pounds of that weight is water. The entire body is highly dependent on water, including the blood, brain, and muscles, which are each over 70 percent water. The most important nutrient you give your dog is water, so it is vital to provide access to pure, clean water at all times.

Although 70 percent of the earth is covered by water, it’s hard to find clean drinking water. The Environmental Protection Agency (EPA) data shows the tap water of approximately 30 million people in the United States fails to meet at least one of their health standards each year. And these are shamefully inadequate standards to begin with—they allow about 100 contaminants that should not be found in tap water. Throughout the United States, more than 2,000 contaminants have been found in drinking water supplies, and your tap water can contain such contaminants as aluminum, bacteria, cancer-causing industrial compounds, chemical salts, chlorine, fecal material (E. coli), fluoride, gasoline, lead, nitrates, parasites, pesticides, radioactive gases, sulphates, and viruses.

According to the U.S. Center for Disease Control, 1,000 to 1,200 people die each year from contaminated drinking water and another 400,000 to 7 million people become sick. These numbers probably reflect only a small portion of the actual deaths and illnesses from contaminated water because there is no official reporting system for water-related health problems. Gathering statistics on these problems is difficult because many doctors don’t consider water when diagnosing an illness, but the toxins in water cause gradual deterioration of the body over many years. Human health care professionals who consider the role of polluted water in illness are rare, and it is unheard of among health care professionals who take care of dogs. When was the last time you called your vet because your dog had diarrhea or vomiting and he or she asked about your dog’s drinking water?

The average dog weights about 60 pounds, while the average person weights more than twice that. The smaller the dog, the higher the metabolic rate and the more susceptible they are to pollutants because their bodies process everything more quickly, including toxins. What might take months to make a human sick, might take only days to make a small dog sick. The same drinking water that is making 27 million people sick each year is undoubtedly making a significantly higher number of dogs seriously ill and shortening the lifespan of many toy breeds.

THE WATER BOWL
Your dog’s water bowl can also be a source of contaminants. Use a glass, stainless steel, or American-made ceramic bowl (many foreign-made ceramics contain high levels of lead that will leach into the water). Plastic and aluminum will also leach and contaminate the water you worked so hard to keep clean and fresh.

Place the water away from any possible contamination by pesticides, cleaning sprays, or other animals. Wild animals, such as rodents, carry many diseases that could be lethal to your dog. Rodent urine has been found to carry a deadly strain of Leptospirois that is different from the vaccine your dog gets.

Clean your dog’s water bowl at least once a day and if you are not home during the day, be sure it’s large enough to last through the day.