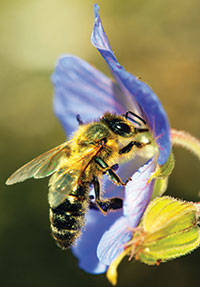 More than fifty years ago, a special extract made from rye and other pollens was first discovered to provide dramatic relief not only from the symptoms of benign prostatic hyperplasia (BPH), but also from the symptoms of prostatitis and prostatodynia, two other common prostate conditions. The story of the discovery of these health benefits of pollen extract is wonderfully recounted in the book, The Prostate Cure, written by Harry G. Preuss, MD, and Brenda Adderly, MHA. However, the story of pollen extract does not end with its benefits in these conditions or even with its benefits in the area of prostate health. Recent research has shown that pollen extract inhibits the growth of some forms of cancer, that it activates important protective liver enzymes, and that it protects against damage to the heart and may improve athletic performance.

Focus on the Prostate

Pollen extract is a special mixture of both water-soluble and fat-soluble compounds derived from various pollens, chiefly rye, and often marketed under the name Cernilton. Most people know of pollen extracts in conjunction with prostate health. This generally is associated with benign prostatic hyperplasia (formerly called hypertrophy), which involves a renewed growth in the number of prostate cells late in life.1 Unfortunately, of men between the age of 40 and 59, nearly 60 percent can be shown to already be suffering from benign prostatic hyperplasia. This usually does not present a noticeable problem until after the age of 50; by the age of 80, however, some 85 percent of all men suffer from one or more symptoms of BPH. The primary effect of BPH is a progressive decrease in the ability to empty the bladder as the prostate enlarges and applies pressure to the urethra. The American Urological Association Symptom Index is now a standard assessment for BPH severity.

Prostatitis is really a catch-all term for several types of prostate problems.2 It always involves inflammation of the prostate and may also include considerable pain, whereas BPH may not involve any pain at all (as opposed to discomfort). Prostatitis is fairly common in adult males and has been classified into four types. Only at most five percent of all cases consist of either acute or chronic bacterial prostatitis, i.e., cases in which infection and the aftermath of infection are the main issues. Nonbacterial prostatitis comprises 64 percent of cases and Prostatodynia makes up another 31 percent.

Nonbacterial prostatitis is the most common of the prostatic conditions, but its cause has not been isolated. It is characterized by an unusually high number and activity of inflammatory cells in the prostate. The resulting inflammation resembles that found in chronic prostatitis, but there is no history of infection nor do cultures (for bacteria) prove positive. Conventional medical treatments do not yield good results. Abstaining from alcohol and spicy foods helps in some cases.

Prostatodynia, which is most common in young and middleaged men, presents many symptoms similar to the above, but lacks the excessive number of inflammatory cells. Just as nonbacterial prostatitis has some symptoms that are peculiar to it, so, too, does prostatodynia. In particular, pain and/or discomfort in the groin, perineum, testicles, lower back and penis seem to characterize this condition. Smooth muscle spasms in the prostatic portion of the urethra and in the neck of the bladder are at work here. The subsequent reflux of urine into prostatic and ejaculatory ducts causes a chemically-induced inflammation. Fatigue in the muscles in the pelvic region and emotional stress appear to be powerful contributory factors in prostatodynia.

Of these three conditions, BPH is what concerns most men. Prostate enlargement is strongly related to normal aging. Some of the factors involved are quite well understood. Nevertheless, there also is substantial disagreement about other issues. BPH can be called an aspect of male menopause because an increased ratio of estrogen to testosterone is active in BPH just as, conversely, in women passing through menopause the ratio of testosterone to estrogen increases. Testosterone, the “male” hormone, is at its peak during adolescence. It decreases thereafter, and the rate of decrease sharpens by about age 50. The decline in testosterone production typically calls into play the compensatory release of other hormones, which are stimulants to testosterone production. These cannot prevent the decline in testosterone levels, but they can lead to an elevated rate of transformation of testosterone into 5-alpha-dihydrotestosterone (DHT) and to the increased binding to and/or decreased clearance of DHT from prostate cells. Testosterone is converted to DHT by the enzyme 5-alphareductase. Ultimately, it is DHT’s actions that cause the enlargement of the prostate. DHT binds to specific receptors on the prostate cells, the alpha 1-receptors. It then is transported into the nucleus of these cells where it attaches to the DNA and ultimately turns on prostate growth.

How do pollen extracts work? Clinical trials with these extracts covering 12 weeks of treatment generally have produced improvements in cases of BPH and prostatodynia of between 60 and 88 percent when adequate dosages were administered and depending upon the severity of the starting condition. The first mechanism of action is smooth muscle relaxation, something that promotes the ability to urinate as spasms in the smooth muscle tissues are reduced. In animal studies, pollen extracts have been shown to inhibit urethral contraction, which facilitates the discharge of urine. Data in these studies is consistent with the observations that pollen extracts facilitate voiding of the bladder and reduce residual urine.

A number of clinical studies have shown that the pollen extracts reduce the size of the prostate in those individuals suffering from BPH. These data indicate that pollen extracts should either inhibit the formation of DHT by blocking the alpha-reductase enzyme, or act to block the binding of DHT to the alpha 1-receptor and thus improve the clearance of DHT from the prostate. Either mechanism could be effective in blocking the DHT-induced biological cascade that leads to prostate enlargement.

Inflammation, Immune Functions and the Liver

Mechanisms of action involving inflammation link pollen extracts to conditions that involve more than just the prostate. It has long been known that pollen extracts modulate the actions of the immune system. Many years ago, researchers showed that the water-soluble fraction selectively inhibits the growth of some prostate cancer cell lines. Later research was published, which showed that a compound found in the water-soluble fraction does not merely inhibit prostate cancer cell growth, but actually causes the death of these cells.3 These results were found in vitro studies (that is, in cultured cells), yet they provide promise for research to come.

The liver protective effects of pollen extract, which have been researched over the years, have received another boost from scientists in the Ukraine. In this case, the tests were in vivo, that is, with animals using a special extract of beecollected pollen. First, it was established that small doses of x-ray radiation cause oxidative damage to fats in the liver (lipid peroxidation) and that this damage activates antioxidant enzyme protective systems. Next, it was discovered that the introduction of pollen extract into the animals’ systems normalized the activity of the glutathione enzyme system, one of the most important of the body’s in-built antioxidant systems.4

Immune Functions for the Heart and Recovery

Surprisingly, pollen extracts may possess the ability to protect the heart against certain types of assault. The ability of pollen extract to protect the cardiovascular system against free radical damage was demonstrated over a decade ago. Now, taking research in a quite different direction, it has been shown that the damage to the heart that can be caused by excess adrenaline also can be reduced by the use of the water-soluble fraction of the pollen extract.5 Researchers admit that they do not have a good explanation for how this cardioprotection is achieved; yet their findings open up the possibility for totally new uses for pollen extract in the future!

Similar to the cardiac protection afforded is general immune protection. Although primarily known as treatments for BPH, flower pollen extracts have been thoroughly studied for their anti-inflammatory properties and their abilities both to boost flagging immune functions.6 One of the findings of this research is that pollen extracts act as immunoregulators and can reduce immune hyperactivity. The serious reader can work through the earliest literature on the development of pollen extracts in Europe and discover that the early uses of pollen extracts were a) for recovery during convalescence and b) recovery from sports exertions.

Conclusions
Pollen extracts have turned out to be surprisingly versatile in their range of health benefits. Along with the prostate benefits, there further are general immune benefits, effects on cancer, the liver, sports recovery and much more.7 Every man aged 50 and above probably should consider a pollen extract supplement as insurance against BPH and other prostate issues. However, given the range and variety of benefits associated with pollen extracts, there is a good argument to be made for men to supplement with pollen extracts for general protection against over-training and or supporting immune imbalance.