How I Found My Own Way Back to Health James Templeton 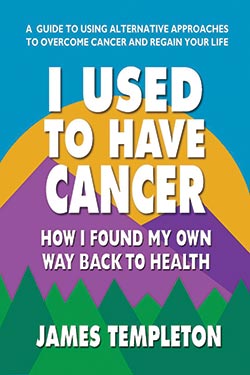 By all standards of success, James Templeton seemed to have it all. He was a highly successful businessman, had a beautiful wife and daughter, and, only in his early thirties, had his whole life in front of him. To avoid the same fate as his father and grandfather, who both died of heart attacks at a young age, James became an avid runner-a passion that he believed helped him stay fit and healthy. Imagine his shock when, during a routine physical, his doctor noticed a mole on his body that turned out to be a melanoma-a dangerous form of skin cancer. The mole was removed immediately and James, who was diligent in his follow-up exams, appeared to be cancer-free-but only for a short while. When cancer reappeared and had spread, on the advice of his doctor, James followed the conventional medical protocol, which included surgery, radiation, and chemotherapy. He was also involved in a clinical trial. When he learned that the treatments weren't working, James was obviously devastated. He had reached a new low point in his life, and as he lay in the hospital bed, he prayed fervently for help. As if by some miracle, help came to James in the form of three different visitors who would change the course of his life-and help direct him on a path back to health.

I Used to Have Cancer is James Templeton's memoir-an inspiring look back at his unique journey in overcoming stage 4 melanoma. James takes you with him on a?trip crisscrossing America, during which he shares the various natural approaches he followed to battle his cancer-from diet and supplements to meditation and lifestyle adjustments. As his journey continued, you will see first-hand how James' definition of success changed from making money to seeing the next sunrise. And how he continues finding success by reaching out to others to share the lessons he has learned.

While this book largely focuses on the various methods James used to overcome his own cancer, it is also an inspiring story of not giving up when all other avenues of conventional medicine fail. It is about taking control of your life and finding a way back from the brink of death. It is about being able to tell your friends, "I used to have cancer."

ABOUT THE AUTHOR
A fifth-generation Texan, James Templeton tapped into his fighting spirit and became an over 30-year cancer survivor who healed himself from a terminal diagnosis with the use of alternative medicine and healing modalities. As the visionary founder of Uni Key Health Systems and Templeton Wellness Foundation, James has since utilized his wisdom and experience to help others achieve optimum health and wellness. He is also the co-author of Your Body Knows Best. Now a resident of the Pacific Northwest, James dedicates much of his time to living a healthy lifestyle and inspiring others do the same. He also enjoys outdoor activities and spending time with family.