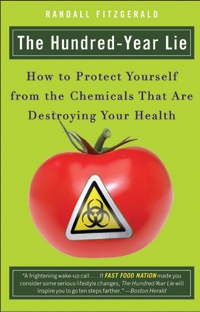 In The Hundred-Year Lie, acclaimed investigative journalist Randall Fitzgerald presents a devastating expose of how chemicals are ruining our health. In the tradition of Silent Spring and Fast Food Nation, Fitzgerald shatters dozens of myths perpetuated by the chemical, pharmaceutical, and food industries and reveals the deceptive and dangerous tactics they employ to deceive the government and the public. The Hundred-Year Lie is a compelling and eye-opening account of how humans became so toxic, what led us as a culture and as individuals down this slippery slope, and how we can navigate our way back to a healthier—and less toxic—future. But unlike other “doom and gloom” books, The Hundred-Year Lie offers solutions to rid the body of these harmful toxins that are invading our systems.

As Fitzgerald explains, the beginning of the 20th century our food supply became the testing ground for innovations in the emerging “better life through chemistry” belief system. But it was in 1940 with the birth of the petrochemical era that the development of synthetic chemicals exploded.

Fitzgerald’s interest in the dangers of chemicals began as he noticed a pattern of health problems among his family and friends, ranging from migraines and food allergies to diabetes and cancer. Investigating news reports and scientific studies from the last several years, Fitzgerald discovered such alarming facts, such as a dramatic increase in the incidence of death from brain diseases, that ordinary supermarket foods are contaminated with chemical flame retardants, and that the human body carries a “body burden” of 700 or more synthetic chemicals, including Teflon, plastics, and pesticides.

In The Hundred-Year Lie, Fitzgerald exposes the inner-workings of the food, drug, and medical industries while also uncovering the sobering truth behind the government’s failure to better protect people. Fitzgerald details toxic threats to our water supply ranging from fluoride to traces of prescription drugs that are flushed down toilets. He reveals how foods have been stripped of their nutrients by additives and chemicals and the shocking truth about what really goes into pet food. He provides an in-depth look at how pharmaceutical companies skillfully market diseases as well as drugs, how they conceal facts and findings, and how they encourage over medication,