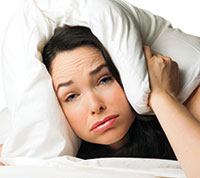 In addition to chronic pain, mostly due to underlying inflammation, most complaints I hear from client’s are about sleep issues—usually not enough of it. I can attest that most chronically ill individuals are sleep-deprived, which inhibits their body’s ability to rejuvenate in spite of other interventions.

I have been personally challenged with sleep issues ever since an accident and subsequent toxicity syndrome (fibromyalgia, chronic fatigue and multiple allergic responses) several years ago. In consulting with thousands of clients worldwide with these disorders, the evidence is clear that sleep disorders plague its victim after a trauma—making it even more challenging to overcome their syndrome disorder. Although recovered from fibromyalgia and multiple allergic responses, getting to sleep and staying asleep, was still an issue for me.

The old adage that sleep disorders are mainly in type “A” individuals (high-energy workaholics) I don’t buy into for one minute because there are so many variables. That said, those of us in THAT category—whose brain computer doesn’t remember how and when to shut down and keeps “rebooting”—need non-toxic solutions to allow us the much needed deep restorative sleep in order to achieve and maintain health.

Effective Today, Not Tomorrow
What I found, personally and professionally, is that most sleep aids (prescription and nutraceuticals) work for a while and then suddenly they’re ineffective. That said, at least most herbals don’t have the toxic side-effects of pharmaceuticals.

My research, and clinical experience, demonstrates that in order to achieve long-term results, the herbal/nutraceutical must be rotated approximately every three weeks. Keep in mind we’re all unique, however, if you rotate you will insure you don’t experience interruption in the sleep your body so desperately needs in order to get and stay healthy and function at your maximum potential. Without exaggeration, I have tried over thirty complex herbal and homeopathic blends and, without exception, they work for up to four weeks and then that much needed restful sleep eludes me yet again.

Being not only a “health detective,” doctor of natural health, and a formulator of nutraceutical products, I began experimenting with various formulas in cooperation with my compounding pharmacist. We finally, after many complex sample trials, found the synchronistic blend that gets me to sleep, helps me stay asleep and, furthermore, allows me to get up feeling rejuvenated and ready to face my demanding day. The clients I asked to participate in my non-medical trials don’t want to be without it. The great part of this complex is that it’s also effective for chronic stress by taking just one capsule twice a day rather than two capsules about 20 minutes before bedtime. We also formulated StressLess Sleep 2 as a similar complex in order to provide clients the benefit of non-toxic, non-habit-forming natural sleep and stress aids that you can rotate. The third formula is in production now and will soon be available. Again, I emphasize you should rotate approximately every three weeks for maximum benefit. And, if your sleep deprivation is chronic, allow yourself three to four nights of taking the supplement before rendering a verdict on its effectiveness—natural remedies sometimes require a couple of days to saturate enough in your system to be completely effective, especially if you’ve gone a long time without good restorative sleep and you’re in chronic pain.

GABA (GAMMA-AMINO BUTYRIC ACID)
An important neurotransmitter and an amino acid—it acts to reduce communication between nerve cells in the brain to achieve a calming effect.

VALERIAN
This herb belongs to more than 200 plant species of the genus Valeriana. It has been used since the second century AD and was recommended by scientists like Galen. After the sixteenth century, this herb became the foremost sedative in Europe, and later in the U.S. Its appeal and approval as a sleep aid was further validated in the 1970s after Germany’s Commission E in 1985 acknowledged the scientific evidence showing its effectiveness.

Studies suggest that valerian affects GABA, a naturally-occurring amino acid known to help with anxiety. It appears that valerian binds to GABA receptors in the brain, similar to those properties found in the drug Valium.

L-THEANINE
A water-soluble amino acid. Aminos are the building blocks of proteins and have been studied extensively for health benefits ranging from cancer and stroke prevention to weight-loss. That said, most research has been conducted and validated for its stress-relieving benefits.

PASSION FLOWER
The botanical name for this flower is Passiflora incarnate and is an herbal with far-reaching calming effects. Scientifically it has shown to increase the GABA in the brain—decreasing overactive brain cells that often prevent us from getting and staying asleep.

HOPS
The hop plant is a bitter, aromatic ingredient in beer. However, its medicinal use for herbal healing properties has a very long history and its uses are supported by modern science.

Chinese physicians have prescribed hops for literally centuries for conditions related to digestion, leprosy, tuberculosis, and dysentery, to name a few.

Ancient Greek and Roman physicians also recommended it as a digestive aid and to treat intestinal disorders. Hops contain two chemicals (humulone and lupulone) that have shown to kill bacteria that cause spoiling.

CHAMOMILE
A medicinal herb used for relaxation for centuries is a member of the sunflower family.

5-HTP (5-HYDROXYTRYPTOPHAN)
The University of Maryland Medical Center (UMMC) reported promising results as a safe option in treatment for depression, fibromyalgia, migraine and other chronic conditions.

Like several pharmaceutical drugs, 5-HTP increases the body’s production of the neurotransmitter serotonin. Excessive amounts of serotonin can have serious complications. Be sure to check with your health professional regarding dosage and any contraindications with other medications.

MELATONIN
Melatonin is a hormone produced in our brain. It is released and stimulated in the brain by darkness, and suppressed by both natural and artificial light. Melatonin works by significantly reducing effects of stress and anxiety that inhibit restorative sleep when the brain cannot shut down.