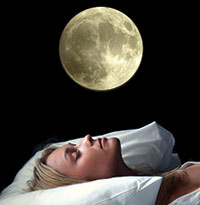 Almost everyone at one time or another has felt that down-in-the-dumps, doom and gloom feeling. It’s as if it appears out of nowhere, only it doesn’t! It turns out that our gotta go, 24/7 lifestyles are starting to get the better of us—at least where our moods are concerned.

Low moods or depression could be caused by inadequate sleep. Whether it’s that exam you’ve been dreading, the horrible date you can’t seem to get out of your mind or the insurmountable workload ahead of you, lack of consistent quality sleep will take its toll on your physical and emotional health. And it doesn’t take all that much sleep loss to get the dark clouds to show either.1

It Doesn’t Take Much
Studies support the fact that even one or two nights of sleep disruption can cause significant changes to brain chemistry, which negatively affects our moods. If you’re someone who truly believes you only need four to six hours of sleep per night to get by because you happen to be one of those “go-getters,” think again, because all you may be getting is a case of the blues. In fact, one study from the University of Pennsylvania found that when subjects were allowed only 4.5 hours of sleep per night for a one-week period, they all described feelings of mental exhaustion, anger, sadness and excess stress during the day. All it took was a few days of a normal sleep cycle to get these subjects to smile again.2

Unfortunately, less and less of us are getting enough quality sleep. It’s been estimated that we sleep 25 percent less than our ancestors did even though our body has remained relatively unchanged. While the average amount of shuteye of our great grandparents in 1900 was nine hours, most people currently check in at a paltry seven.

The amount of severely sleep-deprived people seems to be exploding. Almost a third of all North Americans now sleep less than six hours per night. Pretty crazy stuff when you consider that the former President of the United States, Bill Clinton, once admitted to only getting four to five hours of sleep each night.3 Alarmingly, the vast majority of our new sleep habits cropped up over the last 10 years or so. Our modern life is filled with text messages, energy shots, and brightly lit computer screens that keep us up well after our bodies are clamoring for a soft bed and comfy pillow.

Following are some important facts about the relationship of sleep deprivation and depression that you must be well aware of:

How Sleep-Debt Hurts
Scientists have always thought that the brain organizes and restores everything while we sleep (especially memories). This is why lack of sleep seems to disorganize our body functions and everything else in between.

Although sleep-researchers have proposed various theories about why lack of sleep makes us so moody, it wasn’t until quite recently that scientists pinpointed the exact reason. It turns out that our emotional well-being is to a large part regulated by healthy sleep patterns. For instance, research presented by the National Institute of Mental Health in Bethesda, Maryland, showed that people who experience a lack of quality sleep on a regular basis (called accumulating sleep debt) experience interference with the functional regulation of the amygdala—an area of the brain responsible for the processing of our memories and emotional reactions. This interference causes an overreaction of the amygdala, pushing it towards negative emotional stimuli.4

From Bad to Worse
The National Institutes of Health recently found that a battery of “cutting edge” sleeping pills only boost sleep time anywhere from 11 to 19 minutes.5 When it comes to side effects, prescription sleep aids make you act like you’ve just come from another planet. Many regular users report driving without remembering, sex that they can’t recall, and conversations that never registered in their minds. In other words, amnesia. A paid mouthpiece for drug companies, Gary S. Richardson, MD told the New York Times in chilling fashion, “If you forget how long you lay in bed tossing and turning, in some ways that’s just as good as sleeping.” Sorry Dr. Richardson, but wiping our memories a la Sunshine of the Spotless Mind is not my idea of refreshing sleep.

When evaluating natural sleep aids, you should look for a mechanism of action that is effective, yet safe. Any natural formula for sleep enhancement should work by:

Don’t let unhealthy sleeping habits get the best of you and turn you into someone you’re not. Get to the bottom of your sleeping problems to keep your moods in check and instead of using side-effect riddled and habit-forming drugs, try introducing research-proven side-effect free nutrients like; melatonin, Ziziphus jujube, theanine, and 5-HTP, before bed in order to experience the Ultimate Sleep.

Note: All of the nutrients (and more) mentioned above, can be found in the product Ultimate Sleep—available through: www.TransformingHealth.com