I'm not a fan of fungus, but I've heard that shiitake mushrooms are good for cancer. What do you think? 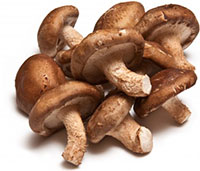 Answer: I think some mushrooms are amazing! Shiitake, known botanically as Lentinula edodes, are seriously great for immune function. They're not just a Japanese delicacy, these mushrooms have been used for centuries, and have a safe history of healing that goes back thousands of years. Chinese medicine traditionally uses mushrooms to enhance qi (pronounced "chee" which refers to your vital life force). We are not talking portabello though, this is altogether different.

Shiitake extracts definitely support immune function, but they also appear to have antiviral (even influenza), antibacterial, and antifungal effects. Ironic that fungus fights fungus, but it's basically the good fungus (shiitake) killing the pathogenic ones. The 2009 study published in Complimentary Therapies in Clinical Practice had data to show that shiitake had "extensive antimicrobial activity against 85% of the organisms it was tested on, including 50% of the yeast and mould species in the trial." This study even compared it to ciprofloxacin, a popular antibiotic. I found a trial suggesting antiviral effects against HIV virus as well as proliferation of leukemia! The activity was due to "lentin" an antifungal compound found in shiitake. Is the study tight enough for you to go off your current treatment? No way, but it's worth including in your regimen, with your doctor's blessings.

Researchers isolated a substance called "lentinan" in shiitake that sparks your own immune system to do a better job at getting rid of cancer cells. Researchers conclude that lentinan helps "prolong the survival of patients with advanced gastric cancer." In another Japanese study, published in Cancer & Chemotherapy, July 2012, researchers looking at shiitake's effects on liver cancer suggested that the mushrooms "might be used for alleviating side effects of chemotherapy and preventing the progression of liver cancer for patients with chronic hepatitis."

Shiitake is active against the hepatitis B virus, so you might say this is a liver-loving mushroom in many ways. It protects the colon too. Over 10 years ago, a study published in the Journal of Alternative and Complementary Medicine found that lentinan was "able to retard the development of tumors" in mice. In fact, they said, "significant regression in tumor formation was observed." Remarkable!

Shiitake mushrooms taste good, I add them to my jasmine rice along with pure saffron, turmeric, onions, grapeseed oil and garlic. Yum! There are excellent supplements/ extracts of Shitake sold at health food stores, and you can also buy multi-tasking formulas which contain several different medicinal mushrooms. Those are a little harder to find, two good ones are MycoPhyto by Econugenics or Mushroom Optimizer by Jarrow.

Suzy Cohen, is known as America’s Pharmacist. She has been a licensed pharmacist for 24 years and is a Functional Medicine practitioner. She’s the author of 6 books, including her most recent Amazon #1 best-seller, “Thyroid Healthy: Lose Weight, Look Beautiful and Live the Life You Imagine.”

She was the host of The Thyroid Summit which broadcast worldwide in June 2014. Suzy has been a syndicated columnist for 19 years reaching 20 million in circulation each week. She is a Huffington Post writer, and also hosts her own syndicated medical minute on TV. Suzy has been featured on The Dr OZ Show 6 times, and has appeared on The View, Good Morning America Health, The Doctors and hundreds of other networks. She is a member of The Institute of Functional Medicine, also the American Academy of Anti-Aging Medicine, The American Pharmacists Association and ILADS, the International Lyme and Associated Diseases Society. You can read free articles and receive your free newsletter by visiting her website, SuzyCohen.com

Books authored by Suzy Cohen include: