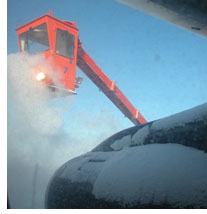 I’ve written extensively about the dangers of carrageenan, both in articles and my book Chemical Cuisine. That said, readers and patients are still asking for more information, you asked…here it is!

Carrageenan is a water-soluble polymer, a gum, used as a fat substitute in processed meats and also found in a multitude of food products for its thickening and gelatin-like qualities.

It is extracted from red seaweed by a powerful chemical alkali solvent—capable of removing skin as quick as any acid. In its natural state it’s healthy; in its processed state, it’s highly antagonistic to humans. It’s the vegetarian equivalent of casein—protein isolated from milk to thicken foods. Carrageenan is the magic ingredient used to de-ice frozen airplanes sitting on tarmacs…oh great, and we’re ingesting this stuff! If you don’t believe a food additive is also an aircraft de-icer, check out the “official” explanation for de-icing aircraft by the U.S. Patent Office website: freepatentsonline.com/4698172.html.

Dangers of Carrageenan
Carrageenan is a suspected factor linking it to varieties of gastrointestinal disorders including inflammatory bowel syndrome, colorectal malignancy, intestinal ulcerations, tumors and growths.

Tobacman studied effects of carrageenan on growth of cultured human mammary epithelial cells for two weeks. She found that extremely low doses of carrageenan disrupted the internal cellular architecture of healthy breast tissue, leading her to conclude: “The food additive, carrageenan, has marked effects on growth and characteristics of human mammary cells in tissue cultures at concentrations much less than those frequently used in food products—carrageenan destroys human cells in tissue cultures, including epithelial intestinal and prostate cells.” To further her research, Tobacman published an extensive review of 45 investigations on the harmful gastrointestinal effects of carrageenan in animal experiments. Her article was published in the October issue of Environmental Health Perspectives, journal of the National Institute for Environmental Health Sciences. Her conclusion, “There seems to be enough evidence associating carrageenan with significant gastrointestinal lesions, including malignancies, to avoid ingesting it—carrageenans are dangerous for human consumption, period! I believe the first consideration is to inform people about the risks associated with carrageenan. There was evidence back in the 1970s that carrageenan has harmful effects, and I think we’ve waited too long to act on that information.”

Immediate and Delayed Responses
If you experience any symptoms, especially gastrointestinal, go back and see if what you consumed contained carrageenan. Listen to your body language; it never steers you wrong. Remember, symptoms may be immediate or as delayed as 48 hours.

Carrageenan Allergy—Case History
“Our son had an as-of-yet undiagnosed metabolic disorder as an infant and was not growing. The doctors surgically installed a g-tube in his belly and force-fed him formula containing high amounts of carrageenan (not that they cared; it was the scientifically engineered nutrient content they wanted).

“The more they insisted we pump through him, the sicker he became, the more mucous his body produced, and he nearly died. Rapid improvement occurred when we stopped feeding him the formula under a new doctor’s care, who wanted him breastfed and self-selecting his diet (all whole foods) while his gut healed. It was then we started looking into food additives, most of which trigger our son’s gastro-reflex issues. After complete avoidance of food containing carrageenan, he quickly recovered.”