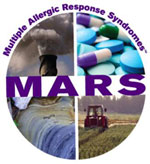 MARS is adverse reactions to toxic chemicals in the air, food, water, and unnatural substances, at concentrations generally considered harmless to the healthy population.

When a healthy body is repeatedly exposed to toxic chemicals, the body develops a decreased tolerance, over-burdening the immune system—leading to autoimmune disorders and subsequent multiple allergic responses.

When a person with a compromised immune system is exposed to toxic chemicals, the sick get sicker, and may even die from the allergic reaction or the resulting side effects from drug therapies given to deal with symptoms of the reaction.

According to studies conducted by the California Department of Health in 1995 and published in Multiple Chemical Sensitivity Research Reports, 17 to 34 percent of Americans report symptoms of chemical sensitivity—currently it is estimated that number has reached as high as 47 percent. The studies also show that up to 80 percent of patients with MARS have been diagnosed with chronic fatigue and/or fibromyalgia, and over 85 percent have digestive and immune disorders.

Dr. Iris Bell, a leading researcher in multiple chemical sensitivities at Tucson Veterans Affairs Hospital in Arizona, estimates that as many as 16 million people in the U.S. alone have now acquired hypersensitive reactions to chemicals of all types—in food as well as from environmental sources.

Furthermore, it is estimated that 58 percent of office visits in general practice today are related to complaints of food, prescription drugs and environmental responses—you can only image what those numbers will escalate to in 2011!

Allergic reactions are as diverse as their victims; however, more and more people are developing severe allergies as a result of living in a toxic world.

These allergies are known as chemically-induced immune system disorders, and a fast-spreading phenomenon associated with global chemical hypersensitivity.

MARS is a condition that relentlessly affects people, their quality of life and the lives of those around them. Their responses leave them incapacitated and essentially home bound...I know; I’m a recovered victim as described in detail in my best-selling book I was Poisoned by my body.

Most individuals acquiring MARS, and the associated syndromes, are looked upon as chronic complainers, or as stated by environmental specialist Dr. Sherry Rogers, “A victim of Prozac® deficiency.” Much to her credit, Dr. Rogers is one of the first physicians that validated multiple response syndromes as a qualified medical condition—not a deficiency of Prozac—in other words, “It’s not all in your head.” The few physicians and health care practitioners specializing in environmental medicine mostly deal with the patients’ symptom-care through neutralization therapy, medications, and environmental modifications.

In my experience personally and clinically consulting with thousands of patients worldwide, what is grossly overlooked is the importance of detoxifying the liver, intestines (large and small), the lymphatic system, and soft connective tissue of toxic substances, as well as supporting and balancing the thyroid. Only when detoxification/rejuvenation protocols are employed can there be lasting reversal of symptoms and return to natural equilibrium of the body systems.

Why The Term “MARS”?

I always disliked the terms used to describe these varied syndromes because saying, for instance, that a person is victim of multiple chemical sensitivities, implies they are only responding negatively to chemicals. Those given the diagnosis as victims of environmental illnesses are labeled as such and, therefore, not validated that their allergic responses are not only to airborne chemicals. Consequently, I coined a phrase that I believe best describes how we as victims feel...like we’re from another planet and no one understands our symptoms or speaks our language...hence multiple allergic response syndromes (MARS).

Victims of these complex disorders can, and usually do, also react to the toxins created within their own bodies. How can they be helped if conventional medicine and society in general does not validate their responses, struggles and assault on their entire quality of life?

Because chemicals are everywhere, it’s impossible to completely escape exposure. These environmental allergens are life-changing and frequently life-destroying for the person afflicted and those around them. The resulting allergic responses affect not only the way our bodies function, but the physical, sociological, and emotional quality of life as well.

Attention has been focused on the small intestine and the connection to MARS, fibromyalgia and chronic fatigue, especially as it relates to a disorder called leaky gut syndrome, clinically known as intestinal permeability. This is where the villi (brush borders) of the small intestine are weakened and allow toxic material and food particles to permeate and enter the bloodstream.

What is not often discussed is the escape of toxic matter from the walls of the large intestine (colon)—intimately connected through an elaborate system of veins and venules into the liver, through a portal venous system, and the lymphatic system.

The more appropriate name for leaky gut syndrome is autointoxication or toxemia.

This is the process by which the body literally poisons itself by maintaining a cesspool of decaying toxic matter in the large intestine—toxins released by the decay process circulate and travel to all parts of the body. Every cell is affected, and because the toxins weaken the entire system, autointoxication and many forms of “incurable diseases” get their start in the colon.

Still another source of intestinal poisons is putrefaction of the portion of the protein from food that fails to undergo absorption, caused by an acquired enzyme deficiency, common in these disorders. Intestinal poisoning not manifesting immediate visible effects appear in disorders such as MARS, fibromyalgia, chronic fatigue, lupus, peripheral neuritis, and arthritis, to mention a few. Eventually, the chemicals produced by putrefaction are so poisonous they irritate the delicate lining of the large intestine and destroy the protective barrier keeping out the invading toxins—penetrating through the damaged barrier into the lymphatic and circulatory systems, especially through the hepatic portal vein.

The Way I See It

Hopefully, the above brief description of what happens to a person when they acquire MARS, will assist you in being more supportive of victims with these “invisible illnesses”—not contributing to their overall body burden by not validating their condition, regardless of the medical “label” they’ve been given. This condition is real!

Each individual is VERY unique in their symptoms and damage caused to their immune system. I’ve detailed the protocols I personally used to recover after my brush with death and all the months I was home-bound in my best-selling book I was Poisoned by my Body. Continuing my commitment of Health thru Education©, I just completed a much requested book, Chemical Cuisine—Do You REALLY Know What You’re Eating?—available on my website at www.gloriagilbere.com. or by calling toll-free 888.352.8175.