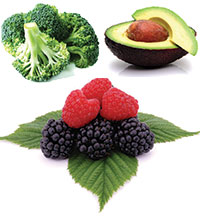 Toxins come in a variety of forms. Our environment is full of them, and not all of these are man-made. Many toxins are found in everyday foods. Worse yet, some of the most dangerous toxins—toxins linked to breast and prostate cancers, for instance—are made in our own bodies. Of course, we are not without inborn defenses against toxic assaults. Indeed, the liver, in particular, is an organ, which is equipped to deactivate and remove poisons from our systems.

The stakes are high in the fight against toxins. Cancers and cardiovascular disease are two common results of toxic assaults upon the cells. The best known of the toxic compounds are free radicals, molecules generally produced by the action of oxygen and which can attack cell membranes and cellular DNA (deoxyribonucleic acid, the “blue print” for cell functions and cell division). Antioxidants and free radical scavengers, such as the vitamins C and E, and plant compounds such the anthocyanidins and ellagic acid found in fruits and vegetables, prevent free radicals from causing damage to the tissues.

However, antioxidants cannot protect against all forms of toxic assault. Although free radicals often initiate cancerous changes in cells, not all carcinogens are free radicals. In fact, most potentially cancer-causing compounds are not free radicals and only develop their full ability to wreak havoc upon cellular DNA after the body has acted them on. Our own detoxification system can be at fault. The liver uses a two-step enzymatic detoxification procedure to remove the bulk of toxins from the body, and both of these steps must be working freely and in a synchronized fashion to properly eliminate poisonous compounds. Important support for these actions by the liver comes from supplements such as calcium D-glucarate, sulforaphane precursors (generally broccoli seed extracts), diindolylmethane (DIM), methyl donors (including S-adenosyl methionine/SAMe and trimethylglycine/TMG) and enzyme building blocks, such as N-acetyl-cysteine (NAC).

Phase I and Phase II Enzyme Detoxifiers
In Phase I of the liver’s detoxification process, the cytochrome P450 enzymes make fat-soluble toxins more water-soluble. This helps to prevent toxic compounds from being stored in fatty tissues and makes it easier for them to be excreted from the body. The fifty to one hundred enzymes involved in the Phase I system prepare potential carcinogens for elimination by the Phase II system. In a process known as “conjugation” the Phase II system commonly uses enzymes to bind directly to compounds that have been changed in Phase I, thus inactivating them. These conjugated (bound) toxins are then excreted.

Unfortunately, Phase I enzymes, by making fat-soluble substances water-soluble, sometimes make poisonous compounds more active as carcinogens until these compounds are fully conjugated. Water-soluble toxins, for instance, are more effective at gaining access to the DNA genetic element of the cells. Therefore for protection against the initiation of cancers, the Phase II enzymes, the enzymes that are directly involved in the excretion of toxins from the system, must always be working just as actively as are the Phase I enzymes. Important Phase II enzymes include the glucuronic acid, glutathione and sulfation systems. Glutathione is widely known to be a major antioxidant and has further actions as part of the glutathione-S-transferases. Glucuronic acid, via the process of glucoronidation, is especially important for binding the toxic metabolites of the body’s steroid hormones (estradiol, progesterone, and testosterone). Sulfate is active as a component in the sulfotransferases.

Many of the benefits the Phase II enzymes were discovered first by studying the health benefits of eating certain vegetables. Remember broccoli? The anti-cancer benefits of broccoli and other cruciferous vegetables have been documented for many years. One study performed in Buffalo, New York in the mid-1970s showed that the regular consumption of these vegetables dramatically reduced the incidence of colon and rectal cancer. Protection against these malignancies was dose-dependent — the more of these vegetables eaten, the more protection. Reviews of the benefits of dark-green vegetables have concluded that broccoli is amongst the most common items in the diets of individuals and populations with very low rates of gastrointestinal tract cancers, that is, cancers ranging from those of the esophagus and stomach to those of the colon and rectum. Other studies have shown broccoli’s protective effects against lung and breast cancers as well.

Much of the work done on broccoli and its cousins has focused upon the impact of indoles, dithiolthiones and sulforaphane. These compounds appear to activate the cellular Phase II enzymes described above. Even highly potent toxins, for instance, aflatoxin, are prevented from doing damage to cellular DNA when these enzyme-activators are fed to test animals. Both glutathione and the enzymes that attach the glutathione to carcinogens are increased by the presence of indoles, dithiolthiones and sulforaphane.

Supplementing For Phase II Enzyme Activity
There are several ways in which the effectiveness of Phase II enzymes can be increased. The first is by supplying “building blocks” for these enzymes so the body can make more of them—in particular glutathione. Probably the easiest way to do this with supplements is to take approximately 750 milligrams of N-acetyl-cysteine (NAC) per day. (Most individuals poorly absorb Glutathione itself, albeit there are claims to the contrary.) Other compounds seem to directly stimulate the production of Phase II compounds. Among these are indole-3-carbinol, especially in its much more active form as diindolylmethane (DIM), and isothiocyanates, the best known of these being sulforaphane. The citrus oil extract D-limonene (250 to 500 milligrams taken once or twice per day with meals) is another potent stimulant to Phase II enzyme production. Perillyl alcohol, a D-limonene metabolite, is similarly active. It is derived from essential oils of various plants, including lavender, peppermint, tart cherries, sage and lemongrass.

Today, whey protein is the rage for bodybuilding and weight loss. Individuals who consume concentrated undenatured whey protein are taking advantage of yet another source of building blocks for Phase II enzymes.

A second approach is to supplement with compounds that indirectly increase the building blocks of Phase II enzymes while performing other important functions in the body. Methyl donors such as SAMe (starting at about 200 milligrams per day via enteric-coated tablets) and, especially, TMG (500 to 1,000 milligrams per day) indirectly produce much of the body’s cysteine for glutathione synthesis and also influence the availability of sulfate and the amino acid taurine. Methyl donors further protect the DNA through mechanisms that do not involve Phase II enzymes.

Finally, it should be kept in mind that all of these approaches work better with a proper diet. This means drinking plenty of fluids, especially water, to keep the kidneys flushed. Likewise, detoxification works better when the diet includes adequate soluble and semisoluble fibers. Supplements supplement the benefits of food and not the other way around — this is a point that should not be forgotten.