Anti-Aging Tip: Get in Sync with Zinc Take a multiple vitamin with at least 15 mg of zinc everyday. When you feel an illness coming on, boost your zinc intake to 50 mg daily.

Zinc is present in every tissue, organ, fluid, and secretion of the body. In fact, it’s present in every living cell. It plays a huge role in immunity (not to mention cell division, DNA synthesis, growth and development, and the activity of about 100 different enzymes). And because the body has no specific storage sites for zinc, you need to consume it on a daily basis.

Many of us don’t.

Sure, cereals and grains contain zinc, but that zinc is bound to phytates,* which makes it unavailable for absorption by the body. Alcohol and other drugs may also reduce zinc absorption (or increase zinc excretion). And we really don’t have consistently reliable measures of zinc deficiency, so we have to make guestimates from our dietary intake. The average zinc intake of Americans from food is a measly 13 mg a day for men and nine mg a day for women. Yes, that just about meets the minimum daily requirement set by the Food and Nutrition Board at the Institute of Medicine, but barely. The symptoms of zinc deficiency include hair loss, delayed wound healing, apathy, and low energy.

Though the conservative Physicians Desk Reference for Nutritional Supplements says, “there is little evidence that zinc supplementation will enhance immune responses in those who are not zinc deficient,” it also states clearly that “zinc deficiency has been shown to impair immunity in many ways.” The question then becomes a philosophic one: what exactly is deficiency? Is it having less than the bare recommended daily allowance that will allow you to escape major disease? Or is it any amount that’s less than optimal? I’m going with the latter.

The body requires zinc to develop and activate T-cells. Low zinc levels are associated with increased susceptibility to pneumonia and other infections in the elderly. And even mild to moderate degrees of zinc deficiency can impair macrophage functions (the Pac Men of the immune system), as well as NK cell activity. Strict vegetarians are at particular risk and may require as much as 50 percent more of this important mineral since the high levels of phytic acid in their major food staples (grains and legumes) reduce zinc absorption.

According to the Linus Pauling Institute at Oregon State University, nearly 100 different enzymes depend on zinc for their ability to catalyze various chemical reactions. Even the structure and function of cell membranes are affected by zinc. Loss of zinc from cell membranes increases their susceptibility to oxidative damage and impairs the function of the cells.

In one study on patients with HIV, zinc supplementation produced higher lymphocyte cell counts and reduced the incidence of bacterial infections. In another double-blind study, volunteers with colds were separated into two groups. One took zinc lozenges every two hours while awake while the other did not. The group taking zinc lozenges recovered from their cold symptoms in 4.4 days compared to 7.6 days for the group not taking the supplements. Another study, involving 273 participants with experimentally induced colds, found that zinc gluconate lozenges (providing 13.3 mg zinc) significantly reduced the duration of illness compared with placebo.

The best food source (see list below) of zinc is oysters. Six medium oysters give you 76.7 mg. Beef is another excellent source; three ounces of cooked beef shanks give you 8.9 mg, a distant second to oysters but still far ahead of everything else. Red meat and poultry provide the majority of zinc in the American diet, and with many people becoming vegetarians, there’s reason to be concerned that we’re consuming less than the optimal amount of this important immunity nutrient. 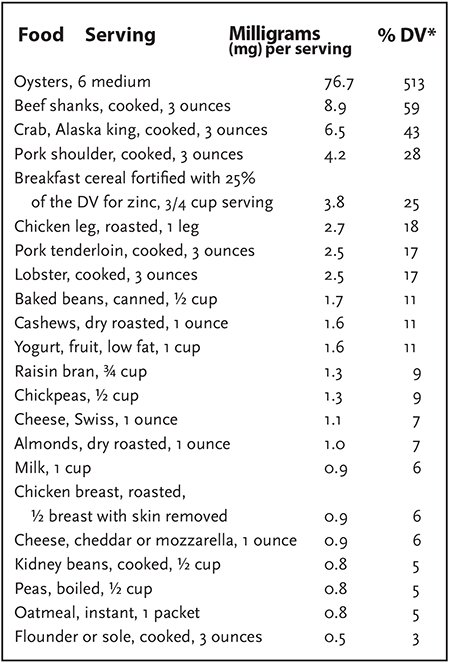 * DV = Daily Value. DVs were developed by the U.S. Food and Drug Administration to help consumers compare the nutrient contents of products within the context of a total diet. The DV for zinc is 15 mg for adults and children age 4 and older. Food labels, however, are not required to list zinc content unless a food has been fortified with this nutrient. Foods providing 20 percent or more of the DV are considered to be high sources of a nutrient.