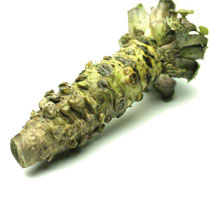 A wise man once said, “an ounce of prevention is worth a pound of cure.” When it comes to protecting your body, there is a new advanced weapon that should be added to your nutritional arsenal. I-Sabi™, a potent Wasabi Japonica nutraceutical, has antioxidant, anti-inflammatory, and anticancer effects, and it may even protect your DNA from harmful mutations that can affect numerous processes in the body. There is a new science in nutrition called Nutragenomics in which DNA and gene expression testing is used to determine numerous body processes. If DNA gets damaged, many of these genes cannot express properly and hence certain body processes are hindered. By repairing and keeping DNA “healthy,” your body can function at an optimal level. Genetic permeations or damage to the body processes can short circuit many normal day to day reactions. I-Sabi is a nutraceutical that can help in all these areas. Before we get into how wonderful this natural compound is, let’s take a closer look at what it is and what makes it so special.

Wasabi Japonica is a member of the cruciferous vegetable family, which includes broccoli, cauliflower, horseradish, and several other foods. Anyone who has been to a Japanese restaurant and has eaten sushi knows that wasabi is the green horseradish condiment that spices it up. What gives the wasabi its sharp flavor are the isothiocyanates. But they do much more than just make wasabi flavorful—isothiocyanates (or ITCs) can actually have a serious impact on your health and may help fight cancer. Research published in the Journal of Experimental Clinical Cancer Research discusses and shows the antioxidant and antitumor effects of naturally occurring isothiocyanates and how they can have a protective effect on the liver. A Japanese study published in the journal Phytochemistry showed that wasabi extract induced apoptotic cell death in human cancer cells. Another recent study conducted at the Ohio State University College of Medicine and Comprehensive Cancer Center stated that isothiocyanates can inhibit tumor initiation by carcinogens and reduce genetic (DNA) damage. In addition, recent research published in the Journal of Biological Chemistry states, “increased dietary intake of isothiocyanates has been shown to be associated with a reduced cancer risk in humans.” This study looked at the mechanism of action found in isothiocyanates and discovered the binding effects of isothiocyanates to intracellular proteins could be the key to inducing apoptosis or cancer cell death. More specifically this study showed that tubulin (a globular protein) is a target for isothiocyanates and that it binding to this molecule caused downstream cancer cell growth inhibition. Although this sounds like a lot of detailed science, understanding the cancer lowering effect of isothiocyanates can go a long way in supporting future cancer research and potentially finding a permanent cure.

Another recent study conducted at the Vanderbilt University Medical Center and published in the American Journal of Clinical Nutrition acknowledged isothiocyanates, “are known to induce phase II detoxifying enzymes, including glutathione S-transferases (GSTs).” This can have a positive impact on the liver which we will discuss later. This study went on to conclude, “high isothiocyanate exposure may reduce breast cancer risk.” So it can have anticancer effects while supporting optimum genetic function. It kind of works like a double whammy—destroying existing cancer cells and limiting future cancer cell growth.

I-Sabi has an astounding 15,000 ppm of isothiocyanates and provides the longer chain of these phytochemicals which are the most potent forms. It is supplied by Biocell Technology, an advanced neutraceutical development and research firm based out of Newport Beach, California. I-Sabi is made from the finest and purest harvest available. Biocell Technology goes to great lengths and expense to make sure the leaves are carefully removed from the rhizome so the maximum levels of beneficial components are preserved in the I-Sabi. This is really important to remember as most restaurant wasabi is made up of horseradish with just a touch of wasabi and green coloring. Getting the most potent extract is essential, so don’t think you can go to the local Sushi Mart and load up on wasabi to receive the same effects. I don’t know about you but I definitely want to get the most bang for my buck when taking this supplement.

We have all heard of antioxidants and how they play an important role in protecting the body. They aren’t very fancy or glamorous. But they can be a powerful tool in your nutritional and health arsenal. So why are antioxidants important? And what are free radicals? Since I-Sabi can have potent antioxidant and immunomodulating activity—it is important to understand how that specific effect will benefit you.

Let’s review immune function and free radicals (prooxidants) and how these damaging compounds work in the body to literally destroy cells and cause damage to the body.

Scientists have found free radicals carry out much of the destructive work through diseases, infections, stress, and aging. Free radicals are also known to cause defects in the genetic material of the cells (DNA and RNA). Some radicals are actually necessary for normal cellular function, but uncontrolled free radical formation can severely threaten the cells which includes joint tissue and lipid compounds.


Once free radicals start the peroxidation process on lipids, a cascade reaction occurs and cell decomposition or death is likely to occur. Antioxidants also may allow for faster recovery from the inflammatory process. Normal molecules in the body have two electrons in their outer shell. A molecule with a single electron in its outer shell is called a free radical. The unstable free radicals occur naturally when oxygen in the bloodstream combines with any number of chemicals including those commonly found in polluted air, second hand cigarette smoke, some chemical toxins, food additives, and re-heated cooking oil. Think about a time when you cut an apple in half and left it out for a while—it changes to a darker color. The apple is reacting or oxidizing to the free radicals in the air it’s exposed to—thereby disrupting the structural component of the apple. Antioxidants work by quenching free radicals and destroying them into harmless substances. I-Sabi can make a difference in your health as an antioxidant and immune boosting compound. I-Sabi has been shown in vitro (human red blood cells) to have significant antioxidant activity and can reduce oxidative damage. It actually was shown to have similar antioxidant activity to the proven antioxidant gallic acid.

Now let’s discuss the liver. The liver is the largest internal organ of the body and is the premier detoxification site. The liver performs different functions, for instance absorbing and converting certain nutrients responsible for important activities such as metabolism, energy, and the crucial role of filtering toxins. A healthy liver is essential to good health. An impaired liver can cause a lot of problems that can have a cascading effect in the body. Some examples that can impair liver function are the consumption of alcohol, “junk’ foods, prescription medicines, and environmental toxins. I-Sabi may support healthy liver function. Animal research suggests that isothiocyanates are potent inhibitors of certain cytochrome p450 forms and may even be a liver aldehyde dehydrogenase inhibitor. In plain English, this means that the unique compounds in I-Sabi can have liver protective and detoxification effects, especially in the presence of alcohol abuse. By having a healthy liver you can also maximize the effects of the other supplements and vitamins/minerals you may be taking, since most of these nutrients are processed in the liver. In fact, having a healthy liver can be crucial to proper protein and amino acid metabolism since amino acids are processed in the liver where they can convert to another amino acid, be absorbed into the bloodstream intact, or make up a protein or peptide. The liver is also the site of thyroid conversion (from T4 to T3) so your metabolism could be at risk if your liver is damaged or not working properly.

If you thought those strong effects were good enough, there is more to the I-Sabi story. It may even act as a COX-2 (cyclooxygenase-2 enzyme) inhibitor and have antiinflammatory effects. COX converts arachidonic acid to PGE2 which can cause inflammation. A Japanese study published in the Oncology Reports journal showed that a special version of isothiocyanates (methylsulfinyl- hexyl isothiocyanate (6-MITC)) extracted from Wasabi Japonica suppressed the expression of COX-2 which therefore may lead to reduced inflammation. Scientists are now finding many diseases are directly linked to inflammation. Other research also indicates that isothiocyanates may allow for the more beneficial COX-1 expression in vitro which supports the idea isothiocyanates may help minimize inflammation. I-Sabi blocks COX-2 expression in vitro but does not suppress expression of the COX-1 enzyme which has some benefits.

As you can imagine, there could be numerous applications such as joint and tendon health as well as muscle pain. It may not be a breakthrough ingredient as a new cure for joint pain however this demonstrates the wide spectrum of benefits that I-Sabi may offer. Future research will help us clarify the specific effects of these exciting compounds.

I-Sabi has all the makings of being a critical health and wellness supplement that can provide a safety net as well as having therapeutic effects. It is a natural weapon in the fight for optimum health.

Rehan Jalali, CSN is President of the Supplement Research Foundation (www.tsrf.com) and author of the The Six-Pack Diet Plan and the Sports Supplement Buyers Guide. He has been studying the science, safety, and efficacy of dietary supplements for the past 15 years.