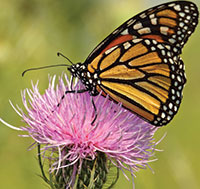 Milk thistle, as is true of similarly classic liver tonics from the Chinese tradition, such as bupleurum, has occupied a central spot in herbalism for good reasons, many of which remain true today.

This herbal tonic generally ranks high in recognition and sales with the American public in comparison with other botanical products. Nevertheless, its sales here are small on a per capita basis compared with, say, Germany, perhaps as little as 25 percent of what might be expected. Both old research and new suggest that milk thistle deserves even wider appreciation.

Milk thistle is listed botanically as Silybum marianum (some older texts use the name Carduus marianus). It also is known as Holy thistle, Mary thistle, Marian thistle and wild artichoke. The seed and its extracts contain the active compounds silibinin, silydianin and silychristin. Silymarin is the collective name for these three compounds, which are termed flavonolignans. There remains a debate as to whether one or more of the minor constituents of milk thistle, in fact, are active and should be included in extracts rather than aiming for higher and higher extract ratios of silymarin.

Milk thistle has been known for its health benefits for more than two millennia. According to the American Botanical Council, in the year 2000 it was the eleventh most widely sold herb in the United States. This seems to be impressive until it is realized that sales in 1998 in Germany were twice those in the U.S. in 2000, to wit, $18 million versus $9 million.1 2 Even in 2011, sales in the U.S. channel known as Food, Drug and Mass were just over $15 million (SPINS data).3

Although one can sometimes buy the seed and brew a tea from it (the seed contains only 1.5 to 3 percent flavonolignans), almost all commercial products are extracts because it takes 12 to 15 grams of the seeds (used for infusions) to deliver an effective amount of silymarin. This is one reason that extracts are almost always used. Another is that assimilation is notoriously poor and elimination from the system rapid.

Milk thistle is available in capsules, tablets, tinctures and other liquid preparations, and as part of formulas containing various ingredients. Most dry extracts are either seventy or eighty percent silymarin, with the amount of silymarin typically being calculated using silibinin as the standard. Some special delivery extracts may start with only thirty to sixty percent silymarin, but bioavailability is key in such cases, not the concentration of the extract. The label should state the amount of silymarin present.

Unfortunately, even that may not guarantee quality. As reported in 2010 in the Townsend Letter, “A recent review by ConsumerLab.com of ten milk thistle supplements showed that only one met ConsumerLab.com’s quality standards. Two products failed to properly list the part of the milk thistle plant used…while most products claimed their milk thistle extracts were standardized to 80 percent silymarin, ConsumerLab.com found actual amounts to range from 47 to 67 percent.”4

Milk thistle is commonly suggested for digestive complaints, skin problems (such as psoriasis), gallstones, and especially liver complaints and disorders. A large body of research covers its use for liver cirrhosis and other alcohol related liver conditions, poisoning from Amanita mushrooms, hepatitis (infectious and drug-induced), and liver conditions related to diabetes. This research is generally supportive, but silymarin does not appear to reverse established cirrhosis.5,6,7,8,9 Some countries, such as Taiwan, reimburse individuals for using hepatoprotectants (i.e., liver protectants), including silymarin.10 Considerable evidence indicates that silymarin is itself a potent antioxidant, but that it may be more significant for its role in raising cell levels of glutathione and superoxide dismutase (SOD).11 A 2003 review of the uses and properties of milk thistle evaluated twenty-one clinical studies involving liver diseases and concluded that all but two showed efficacy.12

Most clinical studies on milk thistle have employed extracts concentrated and standardized to 70 percent silymarin with a daily intake equivalent to 200 to 420 mg silymarin. A normal regimen in clinical settings is 70 to 210 mg taken two or three times daily. As a simple antioxidant or as an addition to formulas, probably 50 to 100 mg is adequate.

Two areas of renewed investigation into the benefits of milk thistle, diabetes and non-alcoholic fatty liver disease (NAFLD), are closely related and are extensions of milk thistle’s known primary benefits. Some researchers consider NAFLD to be a primary contributory cause of diabetes. Indeed, already two decades ago, evidence suggested that perhaps sixty percent of all individuals who are overweight and obese suffer some degree of sub-optimal liver function. Animal tests attempting to uncover the mechanisms of action of milk thistle in NAFLD have suggested that antioxidant and anti-inflammatory benefits play the major roles.13 A clinical trial that tested silybin conjugated with vitamin E and phospholipids found that the combination could be used as a complementary approach to the treatment of patients with chronic liver damage.14

Through a variety of mechanisms, milk thistle extracts have proven to be useful in diabetes. A four month trial involving subjects who were type 2 diabetics taking 200 mg silymarin concluded that there significant benefits in glycosylated hemoglobin, i.e., HbA(1)c, and fasting blood glucose (FBS), but not a change in insulin.15 An analysis of several published clinical studies, similarly, found the aggregate of evidence supports benefits from milk thistle for these parameters.16

Benefits also have been shown against skin cancer.18 There has been a progression from employing milk thistle extracts for preventing hepatotoxicity during chemotherapy, treating hepatotoxicity after chemotherapy, and potentiating chemotherapy and radiation therapy to mitigating long term side effects of such therapies and, more recently still, to using milk thistle extracts for treating cancer directly.19

Buyer Beware Note
As indicated above, despite the fact that milk thistle extracts have been around for a long time and occupy an important spot in the market for herbal products, mislabeled and underpotent products are very common.

Moreover, silymarin is known to be difficult to absorb and to have a very short half-life in the body. Milk thistle extract deserves careful research into the quality of the brand and its method of delivery before purchase.