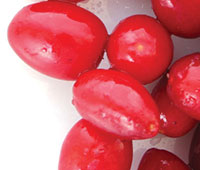 Urinary tract infections (UTIs) result from elevated levels of bacteria colonizing the urogenital tract (including the bladder and urethra; the tube that carries urine from the bladder to the outside of the body), and are one of the most commonly acquired bacterial infections in both non-hospitalized and hospitalized individuals. UTIs lead to about 8 million visits to doctor’s offices and emergency rooms each year in the U.S., and are a substantial burden to healthcare costs.1 Although UTIs are generally not serious if treated promptly, they can cause significant discomfort and difficulty with urination; complications of an untreated UTI include kidney infection with the possibility of permanent damage.

UTIs can affect both sexes, but are much more prevalent (up to 50 times) in women. An estimated 40–50 percent of women will experience at least one UTI in their lifetimes; one in three will have an infection before the age of 24.2 One of the unfortunate consequences of UTIs is their high probability of recurrence, which can be seen in an estimated 20–30 percent of women. The frequency of recurrence can be as high as two to three times per year in some individuals.3 Other groups with high risk of UTI include pregnant women, aged individuals, individuals with other types of urogenital disease (urinary tract obstruction, nerve damage, or those requiring use of a urinary catheter), and those taking certain types of prescription medications (anticholinergic drugs).4

Many UTIs cure themselves as the immune system clears the infection (although the rate of spontaneous recovery can be very slow 5), and antibiotics are typically used to treat more serious infections. However, an ever-increasing amount of evidence suggests that specific factors in the diet may help to reduce UTI risk, by establishing unfavorable conditions for invading bacterial in the urogenital tract. The benefit of a successful nutritional approach to addressing UTIs would be its potential preventative effects on infection, reducing risk of recurrence and the need for conventional treatments (which come with their own risks). Several nutrients have shown promise in reducing the risk of UTI; this article will highlight the human and animal research on the most studied.

Most (83 percent) of uncomplicated UTIs are caused by the bacterium Escherichia coli (E. coli).6 E. coli is part of the normal gastrointestinal flora, but can become detrimental if allowed to colonize the urogenital tract. In order to cause UTI symptoms, E. coli must first adhere to the surface of the bladder; preventing this adherence of bacteria to the bladder or urethra is one approach to minimize the risk of infection.

One such anti-adherence factor is the simple sugar mannose (D-mannose). D-mannose can be found on the surface of bladder cells, and may help to “glue” invading E. coli to the bladder surface, facilitating their infectivity. However, excess dietary mannose appears to interfere with bacterial adhesion, reducing its ability to cause infection. To date, studies of mannose on bladder infections have been confined to laboratory models, but this data is promising. In laboratory mice, mannose not only blocked E. coli from colonizing the bladder, but also prevented them from invading bladder cells and establishing infection.7 Mannose prevented the infection of isolated human bladder cells in laboratory experiments, and was effective against almost half of the bacterial strains that have been associated with recurrent UTIs.8,9 Supplemental mannose is orally bioavailable in humans.10

Cranberries have a long tradition as a folk remedy for UTIs. They were initially thought to acidify the urinary tract and make it inhospitable for invading bacteria; research in the 1980s established that cranberries, like mannose, may prevent infection by interfering with the ability of invading bacteria to adhere to the walls of the bladder and urinary tract. Most of the antimicrobial activity of the cranberry has been attributed to their content of a group of antioxidant compounds called proanthocyanidins (PACs), which may specifically interfere with the adhesion of E. coli; other components of the cranberry may also contribute to their potential UTI-preventing activity.

Cranberry juice and extract are one of the best-studied dietary factors for UTI prevention. Thirteen randomized, controlled clinical trials, with over 1600 subjects, have examined the effects of cranberry products in patients with UTIs. Across all of these studies, consumption of cranberry products reduced the risk of UTI by an average of 38 percent. The effects of cranberry were stronger in some types of patients than in others; in particular, UTI risk was reduced by half in women, by two-thirds in children, and amongst all people who consumed cranberrycontaining products more than twice a day, UTI risk dropped by an average of 40 percent.11,12,13

It is important to note that significant amounts of juice were consumed to see these reductions of UTI risk; in some cases, upwards of 750 ml of juice/day for six months was required to see these effects. For studies in which cranberry extracts were used, 1–8 grams/day were necessary to reduce overall UTI risk or the number of infections per year. Proanthocyanidin content has been reported for the cranberry products in some of the newer studies, although these values vary dramatically amongst different preparations, and it is not yet possible to determine how much of the protective effect of cranberry is due to PACs.

Probiotics are live microorganisms (usually beneficial bacteria) that confer health benefits when consumed in sufficient numbers. Originally associated with the health-promoting effects of yogurt, there are a myriad of different types (strains) of probiotic bacteria that have been investigated in thousands of clinical trials for their potential to protect the gastrointestinal, urogenital, and respiratory tracts. Probiotic bacteria are thought to supplement the healthy bacterial flora that normally resides in these locations, which may increase immune defenses and ultimately protect against infection.

In healthy women who are producing enough estrogen, the predominant type of bacteria in the normal urogenital flora is lactobacilli. These beneficial organisms produce antimicrobial compounds that maintain urinary tract health. During a UTI, the composition of urogenital flora becomes altered; levels of protective lactobacilli drop, and those of invasive coliform bacteria (such as E. coli ) increase. Factors that disrupt the balance of beneficial and invasive bacterial species (such as hormone deficiency or contraceptive usage) can increase the likelihood of infection.14

Several trials have investigated the effects of probiotic lactobacilli for reducing the risk of urogenital infections; results have been mixed. Five studies have specifically looked at the use of suppositories containing probiotic lactobacilli to treat UTIs. In one of these, administration of Lactobacillus rhamnosus GR1 and Lactobacillus reuteri B54 resulted in a 73 percent decrease in the number of UTI episodes in women who were prone to recurrent UTIs; in another, Lactobacillus crispatus reduced recurrent UTI risk by 50 percent.15,16 No effects were seen the other studies. Two studies have investigated oral preparations of lactobacilli for UTI prevention; one showed a nearly 80 percent reduction in recurrent UTI amongst women who consumed milk fermented with Lactobacillus rhamnosus GG at least three times per week; the other study showed no effect.17,18