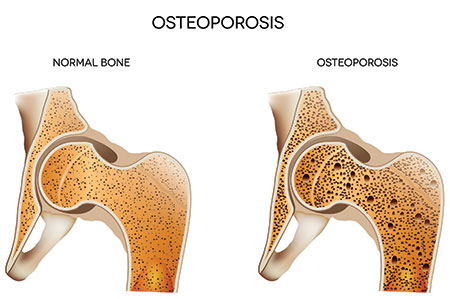 Two years ago, in this space the magazine took a look at bone health and the role of some non-calcium factors in benefits. (See Not by Calcium Alone.) As was observed at that time, to improve bone health and reduce fracture risk, Americans have been taught to focus on calcium supplements and bone mineral density (BMD).
Above: Osteoporosis medical illustration healthy bone and unhealthy bone—osteoporosis. Osteoporosis may lead to bone fracture.
However, the weak relationship between BMD and fracture risk has led experts to look elsewhere for support for bone health. These experts draw a distinction between bone quality (which concerns reduced risks of fracture) and bone quantity (which is concerned exclusively with bone mineral density).

Another issue recently raised is whether some forms of very rapidly absorbed calcium from supplements may bring unnecessary cardiovascular risks. Both of these issues currently are being studied vigorously. Partly as a result, the components of our diet that support bone health are coming more clearly into view, especially with regard to high quality bone powder as a calcium source. Many of the benefits, it turns out, are not tied to the consumption of calcium itself, but more likely to nutrients consumed along with the calcium.

It is worth repeating that for the vast majority of women, BMD is not statistically significantly related to fracture risk. Calcium alone does not greatly improve bone quality.1 Except for those already suffering from significant osteoporosis, bone quality, not merely quantity, generally is more important. Moreover, calcium, the major component of BMD measurements, does not add greatly to bonefs resistance against the most dangerous types of mechanical stresses. It is the other approximately 28 percent of the bone, the collagen and other components found in the bone matrix and that are active in bone formation, that give a degree of flexibility to bone, hence help to reduce fracture risk.

CLINICAL TRIALS REVEAL OHC EFFICACY
On a gram-per-gram basis ossein hydroxyapatite complex (OHC) repeatedly has proved to be superior to other sources of calcium. Long-term clinical trials with OHC continue to yield superior clinical results. Here are some examples:

—2011—Comparison of the effects of ossein-hydroxyapatite complex and calcium carbonate on bone metabolism in women with senile osteoporosis: a randomized, open-label, parallel-group, controlled, prospective study.2

RESULTS: In this group of women with active osteoporosis, OHC significantly reduced bone loss in the lumbar spine and significantly increased BMD in the femoral neck between baseline and year three.

CONCLUSION: OHC had a greater anabolic effect on bone than did calcium carbonate.

RESULTS: Of the 18 controlled trials initially identified, six were included in the meta-analysis. There was no significant heterogeneity among the included trials. The percent change in BMD significantly favored the OHC group (1.02 percent [95 percent CI, 0.63.1.41], P < 0.00001). These results were confirmed in the sensitivity analysis.

—20074—Prevention of osteoporosis: four-year follow-up of a cohort of postmenopausal women treated with an ossein-hydroxyapatite compound.

RESULTS: A progressive and statistically significant increase in BMD was observed in trabecular and total T- and Z-score mean values.

CONCLUSION: Ossein-hydroxyapatite compound could be an effective and safe agent for the prevention of bone loss in postmenopausal osteopenic women, with significant increases in BMD being observed in this group of patients.

—20045—Comparison of the effects of two different types of calcium supplementation on markers of bone metabolism in a postmenopausal osteopenic population with low calcium intake: a double-blind placebo-controlled trial.

RESULTS: The study compared the efficacy and tolerability of 500 mg/day of calcium in the form of osseinhydroxyapatite (OHC) versus 500 mg/day of tricalcium phosphate (TCP) and placebo in the prevention of postmenopausal bone loss. OHC increased bone density by 0.8 percent at the spine at 12 months.

CONCLUSION: While both OHC and TCP were well tolerated and significantly reduced bone turnover markers, the effect of ossein hydroxyapatite seems slightly superior to that of tricalcium phosphate.

RESULTS: Sixty postmenopausal women were included in an open study and were allocated to three groups. The first group (n = 19) received treatment consisting in 3.32 g/d of OHC per day, the second group (n = 21) received 2.5 g of calcium carbonate per day, and the third group (n = 20) was a treatment-free control group. The control group exhibited significant loss of BMD in both the first and second years of treatment. The calcium carbonated group exhibited significant loss of BMD in the second year. The OHC group did not exhibit any significant change in BMD over the two years of the trial.

Results similar to the above have been published with regard to trabecular bone loss in women with osteoporosis (Ruegsegger 1995)7, and so forth and so on dating back to the early 1980s—there have been at least 18 controlled studies. Results have consistently favored OHC for bone health and consistently favored OHC when compared with other forms of calcium supplementation.

BEYOND CALCIUM?
As reported in the earlier article, the bioavailability of calcium seldom exceeds approximately 30 percent regardless of the source. If calcium by itself is not the sole source of benefits to bone health, then one implication is that a natural bone source of calcium may be superior to processed and purified sources.

Using the protein fraction of specific natural form of calcium supplement produced according to an exacting procedure (ossein hydroxyapatite complex or OHC from microcrystalline hydroxyapatite / MCHA), scientists at the University of Auckland have demonstrated this non-calcium component leads to:

This natural source of calcium, when formulated into a health product, is capable of retaining the same protein “fingerprint” found in the tested natural ingredient. The importance of mechanisms of action is that these help to explain clinical results in which on a gram-per-gram basis ossein hydroxyapatite complex (OHC) repeatedly has proved to be superior to other sources of calcium. Undenatured bone includes the combination of an inorganic calcium lattice of microcrystalline hydroxyapatite (MCHA) within an organic protein environment rich in naturally occurring growth factors. These growth factors help to explain the “bone quality” results found with MCHA/OHC.

The University of Auckland studies on ossein hydroxyapatite complex (OHC) were based on the protein fractions and not the calcium found in bone. These protein fractions contain a variety of growth factors, including bone morphogenic proteins. After painstakingly separating the protein components from the calcium, several tests were performed. In one, it was observed that the protein digest dose-dependently increased the area of mineralized bone formed through stimulation of osteoblast differentiation. New bone matrix was laid down and mineralized.

A second experiment looked at the stimulation of gene expression for bone formation markers. This included in this model changes to Collagen Iα 1, OPG (osteoprotegrin), RunX2 and iBSP (bone sialoprotein) gene expression. Runx2 is a key transcription factor in the early stages of osteoblast differentiation. Also found to be increased was an inhibitor of osteoclasts, that is, an inhibitor of the cells that remodel (tear down) bone.

The conclusion of the researchers was that their studies suggest that the proteins present [independent of calcium per se] increased bone formation and osteoblastic cell function. There was a short-term decrease in osteoblast cell proliferation due to activation/differentiation while as new bone was being formed.

The results demonstrated “the potential to act as an anabolic factor of bone formation, in a similar manner to parathyroid hormone (PTH) which decreases osteoblast proliferation but significantly increases osteoblast mineralisation.” [sic]

FIVE KEY BENEFITS
Individuals who are going to the trouble of supplementing their diets with nutrients for bone health usually are more interested in the “payoff” or benefits of their supplements than they are in mechanisms of action. Mechanisms can be complicated and unclear in their implications. Benefits are, well, benefits. Here are five worth considering:

Unlike refined calcium supplements, such as calcium citrate and calcium carbonate, the New Zealand-sourced bone-derived OHC/calcium source contains protein (25 percent on average) rich in essential bone matrix components, including Type I collagen, osteocalcin and bone stimulating growth factors. Specifically, testing has verified the presence of the osteoinductive growth factors IGF I and 2, and TGFb 1 and 2. And, again, the collagen component should not be ignored. Type I collagen has been found to enhance osteoblast differentiation. Further, the combination of type I collagen and hydroxyapatite has been shown to accelerate osteogenesis.10

CONCLUSIONS
The results to date in clinical and other work utilizing bone-derived OHC/ calcium have been impressive. There is no guesswork as to whether faster absorption or higher blood calcium levels should be considered markers for bone benefits inasmuch as bonederived OHC/calcium have been proved to deliver bone support. Moreover, that support extends beyond bone mineral density — bone quantity — to include support for the non-calcium elements of the structure of living bone —bone quality. For women worried about osteoporosis and bone fracture issues, this is not just bone support; it is support for peace of mind.