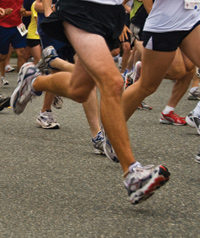 Inflammation is thought to play a role in dozens of health conditions from allergy, Alzheimer’s, heart disease, arthritis and asthma to gingivitis, autoimmune disorders like lupus, and more. Inflammation is the immune system’s first reaction against infection. When you get a thorn in your finger, the thorn cuts through the skin, damaging tissue and allowing invaders (often bacteria) into the area. The immune system responds by releasing histamine and sending out immune messengers alerting the body there is a problem. The area often becomes red, hot, painful and swollen, which indicates protective and healing processes are underway.

Heat, pain, redness—these are all signs of inflammation that you can see. The more dangerous type of inflammation, however, can be hidden deep in your joints, organs or arteries.

What Causes Inflammation?
Stress, viruses, bacteria, parasites, environmental poisons, sugar, certain foods, smoking, high blood insulin levels and obesity are just a few promoters of inflammation. The fact that our life expectancy is rising may also contribute to inflammation as the aged often have a weakened ability to shut off the inflammatory process.

Inflammation is an effective method of ensuring invaders do not enter the body and create havoc, but when it becomes low grade and chronic, the immune system’s army stays revved up and damage to healthy tissues can occur in the crossfire. Scientists are realizing this lifesaving process designed to ward off bacteria, viruses and parasites is the creator of disease when left unchecked.

Celadrin Extinguishes Inflammation
Celadrin, a blend of special fatty acids that are stable and don’t react with oxygen, is one of the most effective, natural antiinflammatories. In studies, both humans and animals have experienced remarkable benefits of reduced pain and swelling, increased movement and reduction of inflammatory factors when using Celadrin.

Celadrin works similarly to but much more dramatically than the essential fatty acids EPA and DHA from fish oils. Fatty acids provide many vital beneficial effects to the body’s immune and inflammatory responses. Various fatty acids induce changes in cell membranes and the responsiveness of the membrane to certain immune factors. They also play a role in suppressing inflammatory cell functions, decreasing cartilage breakdown, triggering of cell death and, like nonsteroidal anti-inflammatory drugs (NSAIDs), reducing the inflammatory activities of the COX-2 enzyme.

How Celadrin Works
The fatty acids in Celadrin have pronounced antiinflammatory effects.

They inhibit inflammation of the thin cells that line the inside of some body cavities (endothelial cells) and decrease the proinflammatory effects of other fatty acids. Celadrin’s fatty acids have also been shown to reduce the production of the negative immune factor IL-6 and to control other immune factors responsible for inflammation. This alone could explain some effects of Celadrin, such as the reduction of osteoarthritic joint pain. And certainly, these functions are very important in preventing further tissue and joint damage while promoting healing. Additionally, the molecules in Celadrin may also play a role in lubrication of an affected joint. This action, combined with anti-inflammatory effects, explain some of the significant improvements in mobility and function in study participants. Such combined effects also appear to be occurring through the application of Celadrin cream in cases of psoriasis. These special fatty acids have been shown to reduce skin inflammation while providing a sustained emollient effect at the site of psoriasis.

Celadrin also works by inhibiting arachidonic acid, one of the main promoters of the inflammatory cascade of immune factors, and by inhibiting 5-lipoxygenase, another mediator of inflammation. The special fatty acids in Celadrin may also alter cellular membranes, protecting them from the action of inflammatory cytokines, an inflammatory protein produced by the liver, or by reducing C-reactive protein (CRP). CRP is a predictor of heart attack, stroke and other inflammatory disorders. By reducing CRP using Celadrin, our risks can be reduced.

Celadrin Improves Joint and Mobility Problems
Results of a double-blind, multi-center, placebo-controlled trial (the most scientifically validated type) published in the prestigious Journal of Rheumatology found that Celadrin, when taken orally, improved joint and mobility problems. Sixty-four participants between the ages of 37 to 77 were given Celadrin capsules. They were evaluated at the beginning, at 30 days, and at the end of the 68-day study. Compared to placebo, Celadrin shined. Participants had more flexibility, less aches and pain and were able to walk longer distances than the placebo group.

In other research at the University of Connecticut and published in the Journal of Rheumatology, 42 patients with knee osteoarthritis received either Celadrin applied topically or a placebo. (No menthol was used in this cream.) The patients were evaluated before application of the cream and then 30 minutes after and then again following a 30-day treatment period where the cream was applied twice a day morning and evening. The researchers evaluated physical function, postural sway, pain and range of motion. Tests of physical function included a timed assessment of how long it took to get up and go from a chair, stair climbing, muscle strength and endurance, and mobility of the knee. The group receiving Celadrin had outstanding results with reduced pain and stiffness, improved balance and strength and better mobility. What was most exciting was, within 30 minutes of applying Celadrin, patients experienced a dramatic improvement in all aspects tested compared to placebo (placebo showed no change).

Celadrin Reduces Pain and Inflammation
Another study published in the Journal of Strength and Conditioning under the direction of Dr. Kraemer at the Human Performance Laboratory at the University of Connecticut using Celadrin cream in individuals with arthritis was an extension of the study mentioned above. Dr. Kraemer wanted to verify that the addition of menthol to Celadrin cream would produce a similar percentage of improvement in therapeutic effects.

One week of treatment with a topical cream consisting of Celadrin and menthol was similarly effective for reducing pain and improving functional performance in individuals with arthritis of the knee, elbow, and wrist.

Dr. Kraemer then performed another study that examined the effects of 30 days of treatment with Celadrin cream with no menthol on the ability to stand and move and pressure on the feet in patients with osteoarthritis (OA) of one or both knees. Forty patients diagnosed with knee OA were randomly assigned to receive Celadrin cream or placebo. Assessments included 20- and 40-second quiet standing on a force plate to measure center of pressure, and rear foot and forefoot plantar pressure distribution. This study showed that 30 days of treatment with Celadrin topical cream improved static postural stability in patients with knee OA, presumably due to pain relief during quiet standing. Celadrin is helpful in improving the exercise trainability of people with osteoarthritis.

Celadrin is not only effective but also safe to take with your prescription medications as no drug-nutrient interactions have been found. Those using the oral form of Celadrin and the cream together have experienced a much faster improvement in pain, swelling and mobility than those using the cream alone.

Effective Celadrin and Glucosamine Combination
Glucosamine sulfate, a very popular joint-health supplement, works well in conjunction with Celadrin. Celadrin is effective at halting the joint-damaging process, while glucosamine can repair damage already done to those joints affected. Celadrin works by providing continuous lubrication and allowing the cell membrane to repel inflammatory messengers from the immune system. It also stops the cascade of inflammation and the assaults on the membrane, which cause stiffness. Celadrin helps glucosamine perform faster and more efficiently in building joint cartilage. The dual action of Celadrin and glucosamine will provide rapid joint cushioning, quickly alleviate inflammation, build cartilage and restore the entire joint area. Cartilage repair usually begins within two months. Spectacular results have been experienced by those individuals with rheumatoid arthritis who have adopted the combination treatment.

It is exciting when extensive double-blind, placebo controlled research is performed to confirm the effectiveness of a natural product. With the knowledge that inflammation can shorten our lifespan by promoting many degenerative diseases, it is essential that we use natural anti-inflammatories to reduce our risk. For more information go to www.celadrin.com.