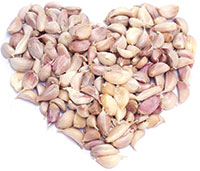 Garlic, a traditional medicine for centuries, is now validated by modern science to have a wide range of medicinal properties. Fresh garlic however is not for everyone, as its lingering odor on breath and skin and its potential gastric side effects make people reject fresh garlic, thus depriving themselves of its benefits. An important alternative, chosen by many is odorless Kyolic Aged Garlic Extract (AGE) that is higher in antioxidants than fresh garlic and often more effective in protecting health.

Antioxidant Power in AGE
Kyolic Aged Garlic Extract is made by Wakunaga of America from organic fresh garlic, by extraction and aging at room temperature for over 20 months, a process that increases its content of antioxidants. These include stable water-soluble organosulfur compounds such as s-allylcysteine (SAC), AGE’s most prevalent compound and s-allylmercaptocysteine, stable lipid-soluble organosulfur compounds, flavonoids, saponins, alixin and selenium.

In close to 700 publications the antioxidant power of AGE have been found to underlie the many benefits of AGE, its anti-inflammatory effects, its cancer preventive actions, its anti-aging effects, cardiovascular protection, its potential to help prevent dementia and Alzheimer’s disease, its prevention of radiation injury, and its protection against drug toxicity, such as overdoses of acetaminophen (Tylenol) and environmental toxic chemicals. AGE is unique among the many garlic preparations on the market by its high quality control and standardization, its wealth of antioxidants and by being the most consistent in helping maintain health and prevent disease.

AGE Antioxidants Protect Against Radiation Damage
Surrounded by radiation from many sources, our body is constantly exposed to increased levels of toxic free radicals that deplete internal antioxidant defenses, with possible dire consequences. Radiation exposure occurs in medical procedures, commercial and industrial activities, airport scanners, luminous dial watches and smoke detectors. Xrays disrupts DNA, triggers mutations that can lead to cancer, other diseases as well as aging, they can destroy neurons with the resulting dementia in the long run and promote plaques in arteries, that if dislodged can cause a heart attack or stroke.

Age Enhances The Cellular Radioprotector Glutathione
AGE also enhances the production of glutathione (GSH), a powerful and important antioxidant and a booster of immunity. GSH is present in all cells and is depleted by a rise in free radicals, which occur in inflammation, exposure to smoking, radiation and certain drugs such as acetaminophen (Tylenol). Dr. N. Ide and others found that AGE and its water soluble organosulfur components S-allylcysteine and S-allylmercaptocysteine enhance GSH production in liver and breast tissues as well as in cells of other organs.

AGE antioxidants Protect Immune Defenses
Organs that produce immune cells are extremely sensitive to radiation, resulting in a fall in protective immune white cells (lymphocytes), a decreased resistance to pathogenic microorganisms and an increase in fatal infections. AGE antioxidants protect the immune system, both by scavenging free radicals and by increasing immune cell activity, compensating for cells destroyed by radiation.

AGE Antioxidants Prevent UV-Induced Immunosuppression
Long exposure to UV light from sun or tanning machines may give us a tanned and healthy look but with a price of serious adverse effects, including wrinkles and cancer; thus one should be exposed to UV light in moderation. UV produces reactive oxygen species that can cause mutations and skin cancer and suppresses immunity, further increasing cancer risk. The intake of AGE with its powerful antioxidants, seen experimentally, reduces the immunosuppressive effects of UV radiation, and help lower the risk of skin cancer.

AGE Antioxidants Protect Against Heart Attacks and Stroke
Heart disease is the number one cause of death for both men and women in the United States, claiming approximately 1 million lives annually. Stroke, another cardiovascular condition strikes over 795,000 Americans each year, which means, on average, a stroke occurs every 40 seconds.

Among the factors that increase risk are cigarette smoking, high blood pressure, high homocysteine and high levels of cholesterol that double the risk of a heart attack.

AGE Antioxidants Help Prevent Dementia—An Anti Aging Effect
Midlife risk factors for cardiovascular disease, such as cholesterol, hypertension, high homocysteine, and inflammation, are risk factors for Alzheimer’s disease (AD); the effects accumulate over the years and frequency of this most common form of dementia increases with age. The broad range of cardiovascular protection by AGE may be extended to a protective effect on the brain, helping reduce the risk of dementia, including vascular dementia and AD. In addition, preclinical studies show that AGE protects neuronal cells against a small free radical-producing toxic protein Abeta that is the hallmark of AD and protects neurons from programmed death, called apoptosis. The anti-apoptotic and anti-inflammatory effects of AGE antioxidants prevented age-related degeneration of the brain’s frontal lobe and improved learning and memory retention.

AGE Increases Energy and Helps Beat Fatigue
One of the consequences of the fast track age we live in is a loss of energy and fatigue. The good news is that we do not always have to resort to a cup of coffee; Aged Garlic Extract can perk us up. Experimental finding with AGE have found that preclinical models subjected to endurance exercise five times per week for four weeks and given AGE 30 minutes before every exercise fared much better than those on placebo. AGE increased glucose metabolism, prevented oxidative stress that occurs in exercise and promoted oxygen supply to the tissues, indicating that AGE has the capacity to help overcome physical fatigue.

The Bottom Line
A good diet is essential for health and well-being and busy as we are, neglect often takes over. Kyolic Aged Garlic Extract helps supplement our needs, Encapsulated in a capsule or available as a liquid AGE is a rich source of protective factors that help us through days and years to energize us, protect against environmental toxins, cancer, heart disease and dementia, to name a few of the age related conditions. By increasing blood flow even our skin benefits and AGE, having powerful antioxidant and anti-aging effects on our brain cells and arteries can potentially make us feel and look well and free of sickness.