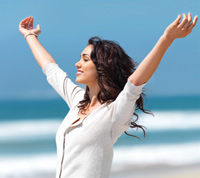 In a quiet village in the Galilee area of northern Israel, a renewal of ancient medicinal wisdom is taking root. In 1998 the first botanical garden and plant resource center for traditional medicinal plants in the Middle East was established. Called Al-Maissam Medicinal Plants Center for Research & Education, this was a unique collaboration between a Palestinian and Israeli team of pharmacologists and herbalists.

Their mission was ambitious. The goal was to preserve the rich herbal and botanical knowledge, which had been passed down through generations of Arabic healers. In addition, they embarked upon the challenging task of cataloging the many native medicinal plants as well as conserving a large number of endangered species that has been an important part of the cultural and health heritage of the indigenous peoples of that area.

They had one more important objective that would prove to have a profound impact for the health of people everywhere. The research team at Al-Maissam was dedicated to reviving and preserving one of the most sophisticated and complex medical systems that ever existed, the healing tradition known as Greek-Arabic medicine. With the assistance of modern technology, these scientists, botanists and researchers were then able to improve upon the herbal formulas, creating even more effective herbal combinations.

The Greek-Arabic Tradition—Forgotten History
Beginning in the 5th century, Europe entered a time of intellectual and cultural decline, known as the Dark Ages. With the fall of the Western Roman Empire, much of Europe was cut off from its cultural and religious roots. This was particularly true when it came to the study and practice of health and healing, which had all but disappeared.

Fortunately, the treasured teachings from the Greek and Roman eras were saved by an emerging intellectual light in the East. Between the 8th and 13th centuries, a powerful Arabic kingdom became the great center of learning and discovery. This light shone especially bright in the realm of medicine and healing.

What emerged was a major and intact medical system, which became Greek-Arabic medicine. During this era, the medical texts of the Greeks and Romans, as well as India and China, were translated augmented, and codified.

An era of profound medical, scientific and healing wisdom flourished for the next 500 years. Arab physicians laid the foundations of the institutions and the science of modern medicine.

Chemistry and pharmacology were invented as independent disciplines. Arabic healers pioneered the concept of hospitals as places where sick patients were cared for, diagnosed and treated. Arabic physicians used specific herbs for anesthesia, conducted surgeries, understood pathologies and realized the role of environmental influences and specific diets for healing. Their knowledge of herbal medicine was rational and vast, creating complex herbal formulations.

Contact with Arab cultures directly influenced the healing renaissance in Europe. Much of what is now European herbal knowledge was actually first introduced from the Middle East. Many common herbs such as milk thistle, olive leaf, feverfew, licorice, lemon balm and bay leaf, came from the Greek-Arabic tradition.

The influence of Greek-Arabic herbal medicine is still felt in the 21st century. In fact, more than 25 percent of prescription drugs are based on chemical constituents discovered in plants.

Although this herbal tradition provides the basis for the health care for millions of people through the Middle East and Mediterranean region, the profound healing knowledge from Greek-Arabic medicine has been mostly forgotten by the West and is at risk of being lost.

Putting Greek-Arabic Remedies Back on the Map
A unique partnership has been forged between the Al-Maissam Center in Israel and the Copenhagen, Denmark-based company, Sprunk-Jansen®. Together they have made it their mission to develop efficacious herbal products of the highest quality based on the formulas that have been used in the Middle East for generations—but with a modern twist.

Employing the latest scientific methods, the company created herbal formulas that have efficacy and safety data proven by in vitro, in vivo and human clinical studies and published in peer-review journals. In addition, their clinical studies are based on chosen herbal combinations and specific plant parts that demonstrate a powerful synergistic effect. They use the most advanced extraction methods, ensuing proven standardization of the active ingredients. Only non-irradiated herbs that are free of all chemical preservatives and pesticides are used.

This ideal marriage of the ancient herbal wisdom wedded with the highest standard of Western technology and science has created a unique range of oral and topical herbal formulations. Although the roots and practice are ancient, they have spent nearly a decade delving through research both modern and historical to provide a basis for the proven, award-winning herbal products that have modern relevance.

Tackling Metabolic Syndrome
According to the American Heart Association, 74 million Americans over the age of 20 are afflicted with a serious health problem called Metabolic Syndrome. It is a combination of risk factors that increases the chances of developing heart disease, strokes, diabetes, peripheral artery disease (PAD) and other chronic inflammatory conditions.

How do you know if you’re a candidate? If you have three of the following four symptoms, you fit the profile: high blood pressure, elevated triglycerides, low HDL and high blood sugar. Carrying extra weight around the middle is also a sure sign (40 inches for men and 35 inches for women).

Sprunk-Jansen has created three very special herbal formulas that demonstrated through human clinical trials to have successfully reduced all the major risk factors for Metabolic Syndrome.

Thanks to the Sand Rat
The Arab medical tradition is well acquainted with blood sugar problems and has documented many beneficial herbs that specifically help to balance blood sugar levels. However, there is one particular herb called saltbush (Atriplex halimus, Chenopodiaceae) which grows in desert climates that has proven to be particularly effective in restoring insulin sensitivity and insulin resistance.

And, we have a rat to thank for that.

The sand rat is a small desert rodent whose preferred food is the leaves of the saltbush plant. However, when transported from its natural habitat into a laboratory environment and fed only lab food, this healthy animal quickly transformed into a fat, diabetic rat with all the classic symptoms of Metabolic Syndrome.

The research on the sand rat, conducted at the Ben-Gurion University in Israel, led to a unique herbal formulation called Glucose Level™, which included saltbush and three other herbs (olive leaf, walnut leaves and nettle leaves). Human clinical trials have demonstrated that Glucose Level promoted and maintained a healthy blood sugar balance and blood sugar levels in test subjects in less than four weeks.

Ancient Herbal Knowledge for Weight Loss
It is impossible to successfully tackle the problem of Metabolic Syndrome without weight loss. WeighLevel™ an award-winning product, has shown to do just that! Composed of four herbs: cumin seeds, olive leaves, wild mint leaves and Lady’s mantle leaves, WeighLevel, was another innovative Sprunk-Jansen product developed according to the traditional herbal knowledge of the Greek-Arabic medical system.

A particularly important plant in this formula is Lady’s Mantle, a plant that grows across the northern hemisphere from Europe to Asia and North America. In the Arabic tradition it has been used to suppress appetite and help weight loss. It aids in weight loss by improving digestion while generating thermogenesis (the burning of stored fat). In combination with the other herbs, this synergistic formula successfully stimulates metabolism, suppresses appetite and enhances digestion without the jittery effect often found with caffeine.

How effective is this product? In an observational study, overweight and obese subjects took one tablet of WeighLevel, three times a day 30 minutes before meals while continuing their normal diet. After three months, the research showed that the subjects demonstrated successful and progressive body weight reduction. The average weight loss was an impressive 24 pounds!

The Greek-Arabic Formula for a Healthy Heart
The latest statistics have revealed that an estimated 80 million American adults (one in three) have one or more types of cardiovascular disease. Women are at the greatest risk since cardiovascular disease is the leading cause of death for women.

While Western societies are in the midst of a cardiovascular disease health crisis, it is well known that the people in the Far East and Mediterranean have significantly lower statistics. In fact, overall, they have better health and live longer.

Greek-Arabic medicine uses specific herbs to support healthy heart functions and blood fat regulation. One such herb is olive leaf, a classic of the Greek-Arabic tradition. It works by helping to maintain healthy fat levels in the blood while, at the same time, regulating fat absorption from the intestines. With the added synergy from loquat tree leaves that balance the production of fats in the liver and prevents fats from oxidizing in the blood, an effective herbal formula was created for maintaining and regulating healthy blood cholesterol levels.

This unique herbal formulation is found in Sprunk-Jansen’s Cholesterol Level™, which is the third component of their Metabolic Syndrome trio of products. A human clinical trial demonstrated that the combination of olive and loquat leaves have a powerful effect on balancing cholesterol levels. Over a three-month period, Cholesterol Level™ reduced cholesterol levels by 22 percent, lowered LDL levels and raised beneficial HDL levels.

Back to the Future with Greek-Arabic Medicine
The great accomplishments and advancements of the Greek-Arabic medical tradition, once the most sophisticated body of scientific knowledge known and practiced in the world, has almost faded from the memory of our modern world. Fortunately the dedication, passion and vision of scientists, enthnobotanists and successful business acumen—a blending of East and West—are putting Greek-Arabic herbal medicine back on the global map.

A collaboration of the best of an ancient healing wisdom in harmony with modern medicine has provided the opportunity to rediscover natural traditions in the new spirit of the time.

With the help of the Sprunk-Jansen range of herbal products, we can now benefit from the past to create a healthier future.