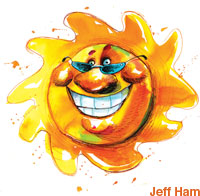 On Wednesday, November 30, 2010, the Institute of Medicine's Food and Nutrition Board issued a report saying in essence that supplemental vitamin D over 800 IUs was unnecessary and could even be harmful (more on this in a minute).


Should you ignore this report? Yes. And I'll tell you why.

The committee looked only at the amount of vitamin D known to be needed for strong bones. That's like evaluating an iPhone based solely on the ability of its built-in calculator to add and subtract. The calculator is one tiny feature of the iPhone, but it's hardly a complete picture of what a good smartphone can do. Similarly, vitamin D is important for strengthening bones, but that's only one of the many important things this miraculous “smart” nutrient does.

Vitamin D expert William Grant, PhD, puts it this way:
“The health benefits of vitamin D extend to at least 100 types of disease, with the strongest evidence for many types of cancer (breast, colon, ovarian, pancreatic, prostate, and rectal), cardiovascular disease, diabetes types 1 and 2, respiratory infections such as type A influenza and pneumonia, other infections such as sepsis, and autoimmune diseases such as multiple sclerosis.”

There is a massive amount of research showing that low levels of vitamin D increase the risk for every disease mentioned by Dr. Grant (above). What's more, when people are low in vitamin D levels it affects their mood, ability to lose weight, physical performance, immune system function and even their chances of dying. (A 2008 study found that low levels of vitamin D increased the risk for death from any cause—called the mortality risk—by a whopping 26 percent compared to those who had “optimal” levels in their blood.)

If you've got enough of vitamin D in your system, taking more won't necessarily make you faster or stronger, or give you the energy to run a marathon. Problem is, many people are very far from having “enough” of it. And when you don't have enough of it, it can cost you dearly in terms of energy, health and physical performance.

We first began to notice the connection between vitamin D and physical performance when a pair of studies—one published in the Journal of Clinical Endocrinology and Metabolism and another by the Gerontological Society of America both reported on the relationship between vitamin D, physical performance and disability in older people. In a third study, Netherlands researchers at the American Society of Mineral and Bone Research's annual meeting in 2005 also found that low levels of vitamin D are associated with low physical performance. In their study, 1238 older men and women with low serum levels of vitamin D performed significantly worse than controls on basic tests of balance and strength such as a basic walking test, getting up from a seated position on a chair, or having to stand balanced with one foot in front of the other.

Scores for all three tests showed significant improvement with increased levels of vitamin D. “Persons with low serum vitamin D had a higher risk for low physical performance,” Ilse Wicherts, PhD told Medscape Medical News at the time. “The strongest effects were found in persons with a major deficiency.”

But that deficiency might be more common than anyone thought. A couple of years later, in 2007, researchers at the Wake Forest University of Medicine found in a sample of 976 adults 65 years of age or older, a whopping 75 percent of women and 51 percent of men had insufficient vitamin D levels. And in testing the participants physical performance using such measures as hand-grip strength, they confirmed once again that those with lower levels of vitamin D performed much worse than those who weren't deficient.

The literature on vitamin D is enormous, and the above studies are only the tip of the iceberg. Three more examples concern the immune system, cognitive decline and weight loss. According to Oregon State University researchers, vitamin D induces the expression of a gene that's actually antimicrobial. The gene is called cathelicidin, and the researchers believe it may be responsible for vitamin D's capacity to function as one's primary immune response. They termed cathelicidin “nature's antibiotic” and believe that in the future, it may form the basis for new immune-based therapies. Vitamin D “turns on” this gene.

Since an estimated 70 percent of Americans have way less than optimal levels of vitamin D, and nearly a billion people worldwide are vitamin D deficient, the Oregon State Researchers warn of an impending public health problem, in both developed and developing nations.

The second example has to do with cognitive decline. Recently, a study in the prestigious Archives of Internal Medicine found that adults with the lowest levels of vitamin D were most likely to have higher levels of cognitive decline as they age. Does this mean vitamin D supplementation will protect you from memory loss? We don't know for sure, but we do know not having enough increases the risk for just such problems. The third example connects optimal vitamin D levels with greater success on a weight-loss program. Researchers measured circulating blood levels of vitamin D in overweight women and men both before and after they followed an 11-week diet plan consisting of extreme calorie reduction (750 calories a day!) You would expect just about everyone to lose on such a restrictive number of calories, and most did. But the researchers found “pre-diet” levels of vitamin D predicted weight loss success. For every increase of 1 ng/mL (a tiny amount) in blood levels of vitamin D, folks ended up losing almost a half pound more on their calorie-restricted diet.

So what is the optimal level of vitamin D anyway?

Well—not surprisingly—there's some dispute about this. The above-quoted expert, Dr. William Grant, says it should be, “at least 40.60 ng/mL.” According to Dr. Grant's research raising serum vitamin 25(OH)D levels to 40 ng/mL could reduce mortality rates by 15 percent in the United States, corresponding to a two-year increase in life expectancy.

The Vitamin D Council thinks 50 ng/ml is the minimum acceptable level, and that optimal levels are between 50 ng/ml and 80 ng/ml.* (This is in line with what most experts I know believe to be ideal—many of them use 70 ng/ml or 80 ng/ml as the optimal goal.)

It's impossible to get anywhere near that number without supplements. And there's virtually no chance of achieving it with the paltry 600 IUs a day recommended by the Food and Nutrition Board (FNB).

The Food and Nutrition Board admits that 97 percent of Americans have a vitamin D level that falls within the range of 20 ng/ml to 30 ng/ml. A supplement of 600 IUs per day will increase vitamin D blood levels by a measly 6 ng/ml. Someone with an “average” vitamin D level of 25 ng/ml would need to take at least 2000 IUs a day to bring it up to 45 ng/ml, and according to the Vitamin D Council.which is way more on top of this than the government's Food and Nutrition Board.45 ng/ml doesn't begin to cut it. Most people who know what they're talking about are looking for optimal levels of 60.80. According to vitamin D expert Zoltan Roma, MD, MSc, author of Vitamin D: The Sunshine Vitamin, “Research now indicates that the correct figure for the minimum daily requirement is 4,000 IUs,” adding “it will probably take another decade before the government nutritional authorities acknowledge this fact and recommend higher vitamin D intakes for the population.”

Which brings us to the issue of toxicity.
The FNB also reported vitamin D toxicity might occur at an intake of 10,000 IU/day (250 micrograms/day), although they could produce no reproducible evidence that 10,000 IU/day has ever caused toxicity in humans and only one poorly conducted study indicating 20,000 IU/day may cause mild elevations in serum calcium, but not clinical toxicity.

In an excellent review of all the literature on vitamin D, Reinhold Vieth, PhD, professor in the Departments of Nutritional Sciences, Laboratory Medicine and Pathobiology of the University of Toronto, had this to say: “Throughout my preparation of this review, I was amazed at the lack of evidence supporting statements about the toxicity of moderate doses of vitamin D.” He added: “If there is published evidence of toxicity in adults from an intake of 250 ng (10,000 IU) per day, and that is verified by the 25(OH)D concentration, I have yet to find it.”

Vieth reports human toxicity probably begins to occur after chronic daily consumption of approximately 40,000 IUs a day (about 100 of the typical 400 IU capsules). Dr. Roma says, “real toxicity begins at 40,000 IUs a day after only many weeks of use.” Let's remember the body itself will easily make 10,000 IUs a day in a few hours in the sun. As one cynic commenting on the new report put it, “I guess they think God doesn't know what she's doing.”

It's very sad that this report—which has been horribly reported by the mainstream media with headlines like “vitamin D can be dangerous” will probably scare off many people who would benefit enormously from taking supplements of this important nutrient.

*Remember there are two ways to measure vitamin D in the blood; don't confuse the measurements. In the U.S. we usually use ng/ml, but the international measure is nmol/mL. So if someone tells you their level is “50” be sure to ask which measurement they're using. (A measurement of 50 ng/ml is equal to 124.8 nmol/mL.)