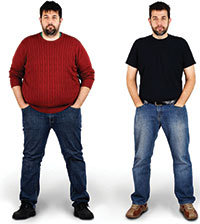 Newsflash: there’s no magic bullet for fat loss. (But you already knew that.)

Manore, a professor of nutrition and exercise sciences at Oregon State University, began this study by categorizing supplements into four categories:

Two, the studies that showed a particular supplement did work more often than not yielded an unimpressive two-pound or less weight loss benefit compared to the supplement placebo.

In other words, hardly the rapid fat burners some supplements claim to be.

“What people want is to lose weight and maintain or increase lean tissue mass,” Manore said. “There is no evidence that any one supplement does this. And some have side effects ranging from the unpleasant, such as bloating and gas, to very serious issues such as strokes and heart problems.”

Not all of Manore’s news was grim. She found green tea and fiber, for instance, could stimulate fat loss, but only when you combine them with the right diet and exercise.

Now, if you’ve read my book Living Low Carb, you know I call fiber the number-one supplement for weight loss. Most of us don’t get enough of this important nutrient that helps promote satiety, lower your hunger hormone ghrelin, and balance blood sugar levels.

But you can’t swallow a glassful of psyllium husk and then go down in the Krispy Kremes. Likewise, you can’t chug green tea with your Starbucks scone and watch the pounds melt away. In other words, you’ve got to combine fiber and green tea with optimal foods and exercise for effective, lasting fat loss.

(Read my take on a recent study where they fed green tea extract to obese mice.*)

Manore inevitably provides advice for fat loss, most of which is decent even if you’ve heard it before: move more, eat more vegetables, start your meal with a salad, eat fruit rather than fruit juice, and ditch the processed crap. Sound familiar?

Can’t argue with any of that. However, she seriously misfires when she recommends reducing high-fat foods to lose weight. Manore evidently never got the memo that the right fats, such as almonds, coconut oil, and avocado, can actually help burn fat.

The take-home here—again, this is nothing new—is that some weight loss supplements prove more effective than others if you use them with an effective diet and exercise plan. Otherwise, you’re just throwing money away. In my experience, a lower-carb diet with optimal protein and fat, combined with burst training and weight resistance, provides amazing results.

Adding fiber and green tea to that plan can give you an extra boost to reduce cravings and step up fat burning. Just don’t expect them to do much if you don’t step up your diet and exercise.