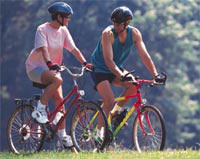 Last week, we discussed the touchy subject of sugar cravings and artificial sweeteners, and the influence of diet soft drinks on weight. (It increases it.)

According to the Vancouver Sun, obesity is partly to blame for the rise in joint surgery. They were, of course, writing for their Canadian audience, but it is just as true in the US. If that is true (and it doubtless is), it is not difficult to understand. Added weight increases stress on the bones and joints.

According to this article, severely overweight people are three times more likely than others to require total joint replacements, and more apt to require repeat operations later on.

The demand for these types of operations is expected to increase even further because of rising rates of obesity among children.

Nine in ten knee-replacement patients, and seven in ten hip replacement recipients are overweight or obese. Several factors may contribute to these higher rates of joint failure, and which should raise several questions.

For example, do overweight or obese people engage in less bone-jarring exercise (that improve bone strength and density) than other people? Do they eat more sugar, drink more soft drinks, or engage in other dietary practices that contribute to bone erosion? We know that inflammation is linked to overweight, osteoporosis and arthritis; inflammation is causally linked to the consumption of sugar, soft drinks, red meat, grains, and alcoholic beverages. Are all of these factors somehow tied neatly together in the overweight population, and in the people who require joint replacement?

If so, let's get a handle on the inflammation. Doing so may reduce both your pain and your waistline. If you read this column regularly, you have already memorized the list of pro-inflammatory foods: sugar, soft drinks, red meat, and grains. Don't eliminate; substitute! Reduce your intake of high oxalate foods (spinach, rhubarb, strawberries…) because these foods often cause pain.

Need to lose weight? Approach the topic from a holistic perspective. Look beyond diet and exercise into your unique physiology. For example, overweight can be caused by stress, an imbalance of female hormones or deficiency in testosterone, hypothyroidism, prescription medications, and so on. What are your triggers? Discover what they are, and work on those to resolve the weight issue.

One of the best natural anti-inflammatories is a blend of minerals from the Sierra Nevada Mountains called SierraSil. They just released the results of the third clinical trials showing very positive results with osteoarthritis. Between losing weight and using natural anti-inflammatories that really work, perhaps we can avoid some joint replacements.

Carol Simontacchi, CCN, MS, is the host of "Your Personal Health," a nationally syndicated radio show that airs on over 200 stations. An online columnist for Vitalcast.com, she is a certified clinical nutritionist in private practice in Portland, Ore., and the author of a number of books on nutrition. She lives in Vancouver, Wash.