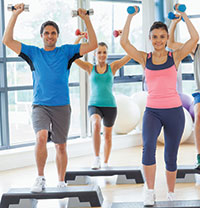 In order to understand efficient exercise we need to first become acquainted with the fact that our bodies developed many thousands of years ago. Back then, we walked, ran, and climbed to get where we were going and to secure what we needed. We fought for food alongside the many animals that shared our home. Today, it’s a different story. We take our car to work, sit at a desk for hours, and then slump in front of the television each night. Boy, is life tough! It may well be mentally tough, but physically tough is another thing. We actually have to go out of our way to get physical.

Many people in this day and age suffer from obesity or over-fatness due to a very treatable syndrome called hypokinesis. Hypokinesis is just a fancy way of saying that a person lacks bodily movement. I’ve often said in my lectures that hypokinesis is as much at the core of obesity as is high insulin. Many studies have shown how ineffective a fat-loss program can be without proper efficient exercise. In fact, exercise on its own, in some cases, can produce a sufficient loss of body fat (although fat loss is always much more pronounced with a proper eating plan).

Our metabolism is really designed to prepare for those times when we will be on the move. Our bodies save the fuel (fat) for a rainy day—a day that never seems to come anymore. In fact, fewer than 30 percent of North Americans engage in much physical activity, with the remainder of the population living life from one couch to the next. So we get fatter and fatter. Without a combination of proper fat-burning exercise and sound eating strategies (i.e. sufficient protein and fat and modest to low carbohydrate intake), we will never be truly successful at becoming or staying lean for

While many of us value health and physical fitness, we have not learned to integrate physical activity into our daily lives. We all know people who exercise consistently, sometimes more than five times a week, week after week. They seem to be different from us. Instead of regarding exercise as a chore, they make it fun and invigorating, something that actually completes their life. For the rest of us, it’s another matter.

Most of us are great starters. We forge ahead at the beginning of the year, filling up the health clubs on January evenings to overflow capacity. But by April, it’s business as usual. That health club membership is wasted, that piece of home exercise equipment gathers dust in the corner of the room, and that aerobics videotape is buried between When Harry Met Sally and The Terminator.

If we’re going to lose as much fat as possible and keep it off, we have to get moving in the right way. However, the majority of exercise routines developed for weight loss over the past 20 years or so are not designed to melt away the fat and keep it off.

THE AEROBICS MYTH
How many of you can relate—or know someone who can—to trying a variety of exercise routines over the years, ordering a few “miracle” devices from infomercials—that seemed too good to be true (and you now know they were), walking for miles and yet the pounds just didn’t seem to budge. The question is why?

By far, the most common physical activity recommended for weight loss is aerobics. We’ve seen them: those spandexclad cuties moving and shaking to the music, inviting us to get out on the dance floor and boogie with them. We’ve also seen the testimonials from those who have succeeded by adding various kinds of aerobics to their weight-loss program. But the fact is that for every person who has won the war against fat by only using aerobics, there are 50 others who have not. The success rate when it comes to permanent fat loss via pure aerobics is not very high at all.

Many of us have tried aerobics ourselves. By aerobics, I mean any exercise that increases our body’s need for oxygen. Most of us have gone running, spent what seemed to be hours on a treadmill or stationary bike, jerked our bodies to the music of an aerobics class or home video, and maybe even tried a Zumba™ class or two.

The truth is, many aerobic workouts are long, and the fat burned during the workout is minimal. As in dieting and fasting, the engines that actually burn the fat—muscle tissue—are burned up too, and the increase in the amount of fat burned before the next workout is almost zip. Hardcore aerobics is anti-muscle—athletes such as elite 10,000-meter runners or marathon participants carry very little muscle mass. Research confirms that excess aerobics causes overtraining and muscle wasting, with a subsequent reduction in fat burning.

Aerobics proponents have recognized this flaw, and many aerobic classes at gyms and health clubs these days also incorporate some sort of resistance training (highimpact training) using steps, small hand weights or elastic cords. But these attempts at making up for the deficiencies of most aerobic exercises are weak at best. Aerobic exercises— although they do have a role in your fitness regimen—are just not the most efficient fat-burning exercises.

BUILD MUSCLE, BURN FAT
In contrast to aerobics, resistance training builds muscle, and it’s muscle that is going to help you burn the most fat. Not only should you want to build muscles, you should also want to turn on the muscles that you already have. Turn them on? Yes, your muscles can actually be tuned up to become more efficient at burning fat. The right type of exercise can help you accomplish that.

Why are muscles so important? Muscles constitute the metabolic engine of the body. The more muscle you carry on your frame, the higher your basal metabolic rate (BMR), which refers to how many calories are produced during rest. And the more active those muscles are, the more fat you burn, 24 hours each day. So if you’re really serious about losing the only weight that matters—fat, then start incorporating resistance exercise in your program at least three times each week.