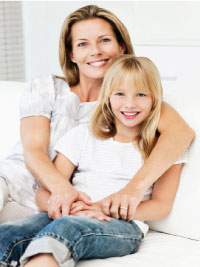 In a talk to an audience of mothers of daughters, I asked the women to close their eyes and see a simple image in their minds, an image of an every day occurrence, “See that you are looking at yourself naked in front of a full length mirror. Look at your face and body. Are you happy with what you see?” In an audience of over 60 women, only one raised her hand. I then asked, “How many of you dislike what you see?” The rest of the women raised their hands. I was stunned, as I was looking out over an audience of well-groomed, attractive women in an affluent community, women who obviously took the time to exercise and cared about how they looked. I told them, “Your attitude about your own body and sensuality, whether you talk about it or not, is automatically passed down to your daughter. Who you are affects your daughter’s sense of self for the rest of her life.”

Society’s pressure and stress on women
Mothers are powerful role models for their daughters’ images of themselves. Daughters imitate and identify with their mothers in deep and powerful ways. This imitation is not conscious. A mother’s tone and body language programs her daughter with attitudes that affect her for the rest of her life. A mother who accepts how she looks, and has a healthy attitude about weight, wrinkles, and aging, goes a long way in helping to counter the peer and media pressure her daughter faces. Similarly, when mothers don’t feel they measure up to society’s beauty standards, they knowingly or unknowingly pass on those feelings of inadequacy to their daughters. Even the slightest comments that a mother makes about herself, such as, “Does this outfit make me look fat?” or “Oh God, look at the awful wrinkles around my eyes” will influence her daughter.

However, self acceptance is difficult, as all women, old and young alike, are under the constant assault of media generated images of youth, beauty, and thinness as the measure of a woman’s worth. Simply going grocery shopping, women are surrounded by magazine covers that tell them how to look better, thinner, younger, and more in shape. At home, television ads, such as those selling toothpaste, emphasize the need for a sexy smile, not oral hygiene, and of course, the ad features a young beautiful woman who is the ideal of desirability. Everything around a woman tells her that how she looks is the key to her value. Young girls are bombarded with images of surgically enhanced bodies and airbrushed faces on the covers of popular adult, teen, and even preteen magazines. Is it any wonder, then, that they don’t feel good about themselves? That they are unhappy with their looks, their natural body type and breast size? Girls today are feeling more inadequate at earlier ages than ever before.

The pressure to look good adds mental stress. For some, it manifests as subtle thoughts of inadequacy, while for others, as outright self rejection and self hatred. Feeling a constant need to compete and to strive to look like the movie stars and models they see, young girls are left feeling inadequate, hopeless and depressed. Constantly striving to realize the unobtainable image of “the beautiful self,” they live with an ongoing sense of not measuring up.

The mind-body link
When we don’t feel good about ourselves, our negative feelings can actually alter our body chemistry. Teens living in a race for a perfection that can’t be won are experiencing an increase of negative emotions and related physiological problems.

The field of psychoneuroimmunology studies the interaction of emotions with the nervous, endocrine and immune systems. Extensive research on the hormonal and immune effects of chronic stress on humans reveals that feelings of hopelessness and helplessness seem to cause the most dramatic changes in stress hormones (such as cortisol, oxytocin and vasopressin), sex hormones (androgens and estrogens), and immune system functioning (changes in immune cell numbers and ability to respond to an infection). The connection between one’s thoughts, emotions, physiological responses and self-image is critical to optimal health. The old adage, “A healthy mind—a healthy body” is true. How a woman feels about herself is key not only to her emotional but also to her physical health. Self image and health

Dr. Akhter Ahsen, the leading theoretician in the field of mental imagery, has extensively researched the development of a woman’s self image through interactions with her parents and society. In his book, Menstruation and Menopause: Imagery Theraputics in Social Context. Dr. Ahsen discusses how one’s self image ultimately is critical to one’s health. He describes how the manner in which a woman is reared by her parents and treated by the society around her becomes biologically imprinted in her brain, in special images called Eidetics. Dr. Ahsen has spent the last forty years studying the links between the eidetic images of one’s personal history, the corresponding neurological and chemical signals they emit, and the formation of symptoms in the body. His work is at the forefront of mind-body research—that is, the effect of an individual’s psychological makeup on the individual’s physiology. In other words, he connects one’s attitudes, thoughts, emotions and personal history to their effect on one’s psychosomatic functioning.

The two most important and sensitive times in girls’ development are the budding of breasts and the onset of menstruation. Ahsen discovered that the way women are treated during these times is critical to their identity as women. These two events, and the subtle and overt messages a young girl receives from the world around her, strongly affect her future self image and her feminine health. Women who have had negative experiences at these times have been found to have stronger PMS symptoms, such as cramping, bloating, labile emotional states, headaches, and insomnia. Symptoms such as irregular menstrual cycles, complete suppression of menstrual cycles, heavy bleeding, and ovarian cysts, among many others, have been traced to experiences at these critical times.

When a girl first begins to develop breasts, it signals a change in her body and psyche. She is transitioning from being a girl child to a woman. Not only is her body changing but also her view of her self is changing. A new identity is emerging within her. Her mind becomes open to new possibilities, ripe with nuances and intimations of becoming a woman. The growing breasts contain genetic signals connected to nurturing, as the breast supplies milk. She senses that in some way she is to become a mother, either of a future child, or of new visions and ideas for the world. She is open to the next step of her evolution into woman. It is a profoundly sensitive time.

Whether a girl is valued or demeaned during this susceptible time is key in how she will feel about herself in the future. Whatever goes on around her forms deeply in her psyche as an imprint of her feminine identity. Do her peers make fun of her growing breasts? Do the boys of her age group make humiliating comments? How do her siblings treat her? How is her family responding to her changes? What messages is she getting from television and the world around her about being a woman? Nature, which controls her changing body, mind and genetic signals, collides with our culture. This clash is a ripe time for the impressions that will later result in formation of symptoms.

Onset of menstruation
The first time a girl menstruates is a highly distinctive event in her life. It marks her coming of age into womanhood. She is now physiologically able to bear children. Genetically and psychically, her sexuality becomes connected to giving birth. This event marks a powerful change in her body and in her purpose. Her body begins to go through a monthly cycle of changing hormonal output, which affects her mental and emotional states. What occurs the first time she menstruates becomes an imprint in her mind for the rest of her menstruating life, as she is incredibly sensitivity and receptive to the input of those around her. Therefore, a true understanding of the profound change that is occurring both in her mind and body is needed. In this modern world the meaning of this time is not honored and its true understanding is lost. Often, it is merely seen as a medical category in women’s reproductive health.

The subtle and overt messages a girl gets from her mother, and from the significant people around her, the first time she menstruates will affect her attitude towards her own feminine body and its functions for the rest of her life. The impact is very deep. Whether a mother treats the event with celebration, neutrality, or shame will form a daughter’s positive or negative sense of herself as a woman. The imprint of the emotions of that moment will affect the daughter’s cycles and the extent to which she will experience PMS symptoms. If a mother celebrates the event and honors her daughter’s emerging womanliness, her daughter will also honor and celebrate herself as a woman. When she menstruates, these subtle feelings of pride accompany the event and these, in turn, affect the hormones and chemicals she emits. Thus, she experiences ease and lack of problematic symptoms. On the other hand, when a mother treats the event with indifference or negativity, with irritation, lack of interest, or shame, the message imparted to her daughter is that becoming a woman is insignificant and even negative. This negative message creates stress for the daughter and each time she menstruates this negative trigger will stimulate cortisol and a host of other stress and sex hormones, causing PMS and many other problematic gynecological symptoms.

The solution
Since daughters unconsciously identify with their mothers, all mothers have tremendous power to shape their daughters’ self image. By teaching that a woman’s value is not based solely on outer looks, but on her inner essence, by talking to her daughter in sensitive ways during the critical junctures of sexual development, and by deep self love and acceptance, a mother goes a long way to ensure her daughter’s future mental, emotional, and physical health.

For more information on this topic, read my book: Images of Desire: A Return To Natural Sensuality.