Varicose veins are elongated, dilated, and tortuous superficial veins usually seen in the lower extremities. They occur because of incompetency in the valves of the vein, which permits a backflow of blood in the dependent position. The cause of valvular incompetence is unclear, but predisposing factors include familial tendency, inherent weakness in the vein walls, congenital arteriovenous fistulas, pregnancy, ascites, occupations requiring prolonged standing, obesity, and vein trauma or occlusion. Varicosities increase with age and are more common in women than in men. Initially the vein may be palpated but invisible, and the individual may have a feeling of heaviness in the legs that gets worse at night and in hot weather. Aching also occurs after prolonged standing or walking, during menses, or when fatigued. Over time, the veins can be seen as dilated, purplish, and ropelike.

Conventional medical treatment for varicose veins is surgical removal, called “vein stripping,” or injections called sclerotherapy, into the veins, which cause them to collapse and “scar down.” In addition, there are nutraceuticals that can be used as part of a complementary approach to varicose vein treatment. These include butcher’s broom, vitamin C, horse chestnut extract, Ginkgo biloba extract, gotu kola, psyllium husks, and witch hazel.

Butcher’s Broom
Butcher’s Broom (BB) has been successfully used, alone and in combination with other natural substances in the treatment of varicose veins. In one study, a combination of BB (16.5 mg), the bioflavonoid hesperidin (75 mg) and vitamin C (50 mg) were evaluated in 40 patients between ages 28 and 74, suffering from varicose veins and venous insufficiency of the lower limbs. The results showed improvement in symptoms and other parameters. In addition, the biological and clinical tolerability were excellent.1 Other research using this same combination of BB, hesperidin and vitamin C demonstrated similar efficacy.2 One mechanism by which BB exerts its beneficial effect is by altering levels of a substance called cyclic adenosine monophosphate (cAMP), which may play a role in degrading the venous tissue, and seems to be found in elevated levels in varicose veins.3

Vitamin C
The last paragraph cited studies involving the successful use of vitamin C, BB, and hesperidin for varicose veins. The role of vitamin C in this regard makes sense when considering its well-known function of maintaining the integrity of blood vessels.4 In addition, elderly individuals who had higher blood levels of vitamin C (vegetarians) were found to have a much lower incidence of oral varicose veins (that’s right, varicose veins can occur orally too) than the general elderly population.5

Horse chestnut seed
Horse chestnut extract (HCE) can be used both internally and as an external application for disorders of venous circulation, including varicose veins.6 Preliminary studies in humans have shown that 300 mg three times per day of a standardized HCE produced some benefit on one aspect of varicose veins after only 12 days of supplementation.7 In addition, the triterpenes found in HCE, inhibit the venous enzymes that degenerate vein wall membranes.8 Additional research showed that a single dose of HCE significantly reduced the leg volume and capillary filtration when pressure was applied to the thighs of normal women with normal non-disease related inadequate circulation.9

Ginkgo biloba
One mechanism that may account for the alterations observed in varicose veins is the lack of oxygen resulting in damage to the vascular wall, and measured clinically by circulating endothelial cells (CEC) detached from the vascular wall. In one study, an extract of Ginkgo biloba was tested by a randomized double-blind, placebo-controlled clinical trial. In the group receiving the Ginkgo, the CEC count decreased by an average of 14.5 percent after a 4-week treatment period. The placebo group, however, only experienced an 8.4 percent decrease in CEC. The decrease from week 0 to the end of treatment was significantly higher in the Ginkgo group than in the placebo group.10 These results suggest that the Ginkgo improved circulation and consequent oxygenation, resulting in less vascular damage.

Gotu Kola
Gotu kola (Centella asiatica) is known for its stimulating properties on the healing of wounds and increased collagen synthesis.11 This benefit appears to extent to reducing the breakdown of connective tissue in blood vessel walls, as shown in a study on patients with varicose veins who used gotu kola.12 Research has certainly shown that this herb is able to improve microcirculation in cases of venous insufficiency (poor vein circulation),13 which includes a reduction in symptoms of heaviness in the lower limbs and edema,14 ankle edema, foot swelling, as well as an improvement in other parameters of microcirculation.15 Perhaps of greatest significance is that, like Ginkgo, gotu kola has also been shown to reduce the number of circulating endothelial cells—which suggests a potential benefit for varicose veins.16

Psyllium husks
It is vital that adequate fiber be included in the diet. Insufficient fiber causes increased pressure within the abdomen, which in turn creates excess “back” pressure on the veins, which return the blood from the legs, contributing to varicosities. Of course, dietary fiber is found in whole grains, beans, and root vegetables. These sources, however, can be supplemented with psyllium husks, which are an effective treatment for simple constipation, and whose use has been associated with better stool consistency and a lower incidence of adverse events.17

Witch Hazel
Although witch hazel is known primarily for combating hemorrhoids, it may also be useful for varicose veins.18,19 Application of a witch hazel ointment three or more times per day for two or more weeks is necessary before results can be expected. 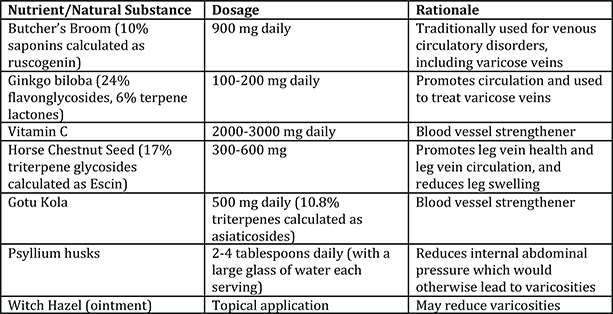