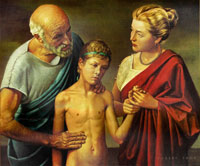 The venerated father of modern medicine, Hippocrates, has had many of his wise sayings immortalized over the past two millennia. Most of us know a version of the following: “As to diseases, make a habit of two things—to help, or at least, to do no harm.” However, there is one quote attributed to Hippocrates that has all but disappeared from a list of his most quotable quotes. Hippocrates poised the rhetorical question, “What is Woman?” to which he supplied the answer: “Disease!”

Unfortunately, the prevailing belief that nature somehow created a design flaw in women’s reproductive systems, making them particularly susceptible to many physical and reproductive problems, has persisted for the past 2500 years.

You might think that we are now living in more enlightened times, especially when it comes to understanding and treating women’s hormonal health. That is truly debatable.

The introduction of the Pill in 1960s issued in a new world of possibilities in the treatment of women’s hormonal issues. Inexpensive synthetic hormones became all the rage. Six years later, in 1966, the menopausal woman became the next marketing opportunity for the hormone industry, with the promotion of estrogen replacement therapy for all menopausal women. As with the Pill, no long-term studies were ever conducted on the safety of these hormones. Ten years later, it was discovered that not only were the young women Pill takers being diagnosed with strokes and blood clots and even dying, but the women taking estrogen therapy had an 800 percent increase in uterine cancer…and they were also dying.

The blame in both situations was clearly laid at the feet of high levels of the hormone estrogen.

Nevertheless, the enthusiastic marketing of hormones for a plethora of women’s health issues continued unabated. The Pill (now manufactured at a lower, but no less dangerous dose) in its many versions has widened its territory. Not only was it prescribed for birth control but also as a therapeutic treatment for such imbalances as heavy periods, lack of periods, painful periods, ovarian cysts, endometriosis, and even perimenopause. Young girls at the tender age of 13 are encouraged to use it for controlling acne.

Hormone replacement therapy was also heralded as a major medical advance for menopausal women. Whether it was for hot flashes, osteoporosis prevention, heart protection, or cognitive improvement, the untapped potential of the baby boomer generation provided a lucrative market for the hormone makers.

The Hippocratic attitude that women’s hormonal systems were far too unpredictable and dysfunctional to be left alone made hormones an indispensable treatment for medical doctors. For the past 40 years, women of all ages throughout the developed world have been told that they must rely on some form of hormonal regulation by using synthetic hormones.

Far from the wonder drug image portrayed by glamorous advertising campaigns, synthetic hormones have a very dark and dangerous side to them. Things began to unravel in 2002 when the Women’s Health Initiative, the largest study ever conducted on the effects of HRT, aborted its study three years early due to the documented increased risk of breast cancer, strokes and blood clots in the study participants.

In 2003, the National Cancer Institute found a substantially increased risk of several types of cancer among combined Oral Contraceptive users, citing a “significant increase” of the risk of breast cancer, as well as an increase in the risk of cervical and liver cancers.

The following year, the National Institute of Health, announced in its 10th Report on Carcinogens that all steroid estrogens found in oral contraceptives and hormone replacement therapy are known human carcinogens.

It would be assumed that such dire warnings from highly regarded health agencies would cause the medical community to rethink the guidelines for prescribing the Pill and issue warnings about its established dangers to the health and well-being of women.

In reality, however, there was a concerted effort by doctors and pharmaceutical companies to expand the Pill’s domain. In keeping with the 2500-year-old trend that a woman’s body is inherently disease prone, a new theory emerged that attempted to convince women that their menstrual cycles were a design flaw of nature (and a dangerous one at that) that should be done away with.

The solution to the “problem” of menstruation was the prescribing of the continuous low dose Pill. Once again, without any research behind this theory, oral contraceptives are now marketed to young women specifically for period suppression. Some versions induce a bleed every 3 months. Other forms of contraceptives are implants that will completely suppress menstrual cycles for three years.

Five hormone manufacturers intend to release their version of contraceptive hormones in 2006 as part of the growing period suppression market.

What are the risks to women who begin using oral contraceptives in early adolescence? In 1996, the prestigious British medical journal The Lancet demonstrated that use of the pill starting in adolescence increased risks of breast cancer by 60 percent.

The effect of early and continuous contraceptive use is contributing to a devastating trend—the growing incidence of breast cancer in young women in their 20s and 30s. A decade ago, this was a very rare event. Presently, one out of every 250-breast cancer diagnoses are in women under the age of 40. When breast cancer is diagnosed in young women, they tend to have a more aggressive form of cancer and a worse prognosis.

While both medical doctors and drug companies’ wax almost lyrical about the tremendous benefits of period suppression as preventative health for all women, the real danger of a potentially aggressive and lethal form of breast cancer that looms before a generation of unsuspecting women is terrifying.

It is truly immoral to encourage the use of known carcinogenic drugs on a vulnerable population of women—for that matter, on any population of women. It is particularly heinous when a woman’s menstrual cycle, a physiological process intrinsic to a woman’s physical, emotional and spiritual health is relegated to a disease state requiring toxic drugs for its elimination.

How many times must history be repeated before we will learn? When it comes to the use of synthetic hormones, the evidence is overwhelming—they cause Breast Cancer.

Here is a riddle to ponder. What is it about the word “Carcinogen” that you don’t understand?

Dr. Sherrill Sellman’s latest book is titled What Women MUST Know to Protect Their Daughters from Breast Cancer. Her mission is to lift the veil on the many causes that contribute to the growing incidence of breast cancer in young women. The purpose of this book is to avert an emerging health crisis. It is an eye-opening and empowering road map for protecting our daughters from serious hormonal imbalances including breast cancer. But most importantly, it is an invaluable handbook for solutions.

Dr. Sellman can be contacted at This email address is being protected from spambots. You need JavaScript enabled to view it. or at http://www.whatwomenmustknow.com.