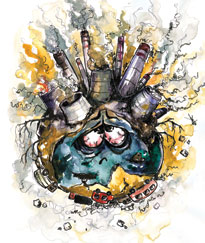 OURS IS A POLLUTED WORLD. At home, at work, at school we are likely to be exposed to substances that can sicken and even kill us. The air we breathe, the water we drink, the foods we eat—all can be contaminated with toxins that threaten our health. Other things we use in our daily lives—prescription drugs, lawn and garden chemicals, and household cleaners—often can have toxic effects that their labels do not disclose. Of the 50–60 thousand chemicals available to industry, only a few hundred have been tested for safety. Yet thousands of others have chemical structures that virtually guarantee they are toxic to humans. Consequently, we all carry a “total toxic load” from all the toxins to which we are exposed.

Many of us are not aware we are carrying a toxic load. While some toxic substances can be immediately harmful others can be insidious, doing their damage over months and years. Toxins can drain our life energy and make us fatigued, impair our workplace productivity, promote cancer and dementia, and other killer diseases over the long term. Up to 90 percent of all cancers are linked to the environmental carcinogens coming from cigarette smoke, water, food and air. Unless we become vigilant and learn how to protect ourselves against toxins, odds are we won’t live to a ripe old age. To be healthy and enjoy optimal wellness, we must be free of toxins.

To know what you’re really up against, it’s important to grasp the realities:

Let’s now consider these realities as they apply to daily living.

Multiple Low Toxic Exposures Build Total Toxic Load
A toxin is any substance that can damage the body. As a rule, the damage from any toxin is dose related: the greater the exposure, the greater the damage. Toxicology experts developed the idea of a “threshold dose”—the dose above which an “average” person will experience harmful effects that can be measured. But under certain circumstances, low doses—doses below the threshold dose—also can damage our health. One individual may be more sensitive to toxins than the “average” person? Another individual may suffer a toxic exposure while suffering from a viral infection or some other situation that has lowered his resistance to toxic attack. Someone else may become exposed to multiple toxins at the same time. Toxicology is not very good at predicting how such special circumstances will worsen toxins’ effects on health.

The damaging effects from relatively low exposures to more than one toxin could likely be just as harmful, perhaps more harmful, than exposure to relatively high levels of just one toxin. For example, large-scale surveys have found that Americans carry more than 100 potentially toxic chemicals in their blood. Each of these could have cumulative or synergistic effects with the others.

There is considerable scientific and medical evidence that total toxic load is a valid concept. This concept mandates that we do everything we can to avoid being exposed to toxins—to ANY toxin in ANY amount at ANY time. With the planet so permeated with toxins, many of them implicated in cancers, cardiovascular diseases, allergies, brain diseases, fatigue, and many other conditions of poor health, it’s important to recognize this threat and pursue a lifestyle of toxin awareness and avoidance. Let’s be real: two of the most damaging toxins are the lifestyle toxins alcohol and cigarette smoke.

Back in the 1970s, patients deluged “alternative” physicians with bizarre symptoms related to exposures to toxic chemicals. Most went to the alternative doctors because the mainstream doctors didn’t believe them or couldn’t help them. By taking detailed case histories, the sharp physicians discovered patterns of chemical poisoning that were radically different from the textbooks. They found that any toxic chemical could damage multiple organ systems: the brain and nervous system, the liver, the immune system, the lungs and bronchial passages, the intestinal system, the heart and circulation, the muscles and joints, the skin, everywhere. They found that low levels of exposure could cause harm—there were no consistent thresholds for safety. And they found that exposure to one chemical often rendered a patient more vulnerable to others, even at very low exposure levels. Many of these patients were diagnosed with chemical hypersensitivity.

Chemical hypersensitivity is a crippling condition. The afflicted person often cannot be in the presence of cigarette smoke, chemical cleaners, printing inks, or any man-made substance. Their senses of taste and smell are exaggerated; they become sensitive to gases coming out of the carpeting or the walls, to household glues and nail polish, and to almost all the other solvent-based materials. Socially they often can’t be around people who smoke or wear perfumes or colognes. As these patients develop spreading sensitivities to more and more different chemicals, exposures to just traces of these will trigger severe reactions. There have been cases of people who committed suicide rather than have to live in isolation to avoid exposure.

As dedicated alternative physicians continued to document their patients’ life histories, they came to understand that the symptoms of chemical hypersensitivity and other toxic damage are a net outcome of cumulative damage from all sources of toxicity that reach the body. This was in direct opposition to the mainstream dogma that single chemicals cause toxicity and then only when the exposure exceeds known threshold levels. Out of the alternative medicine movement came a new clinical toxicology model, according to which each human being has only a finite amount of resistance to repeated toxic chemical exposures. Exposure to any chemical, however slight, depletes that patient’s pool of resistance and makes him or her more vulnerable to another exposure from the same chemical or a different chemical.

According to this zero-tolerance model for toxic exposures, the capacity to resist toxic damage varies from each person to the next. The balance between good health and bad health is very delicate, including those who are outwardly very healthy. Good health can be dramatically destroyed by one chemical exposure, as occurred at Bhopal in India, or slowly drained away by low-level exposures to the sorts of toxic chemicals that permeate modern life.

Soon after the total toxic load concept emerged, in the early 1980s, I had the opportunity to carry out a wide-ranging scientific review of this field. The thousands of already published experiments and clinical observations convinced me that toxic exposures, whatever their source, were closely linked with biochemical free radical load, which depletes the natural antioxidant defenses. Also, whether the toxic sources are chemical, radiation, infection or physical trauma, they translate into free radical attack on our cells, tissues, and organs.

By the mid-1980s, after I co-wrote a pivotal textbook on free radicals and antioxidants, a consensus had emerged concerning chemical hypersensitivity. Since the body uses primarily antioxidant nutrients and enzymes to defend against free radical attack, dietary supplementation with antioxidants should be the first line of treatment for chemically damaged patients.

This was the breakthrough the physicians needed. They became more comfortable to use selenium solutions, buffered vitamin C, vitamin E, glutathione and other antioxidants with their patients, and soon there were spectacular improvements in the medical management of chemical hypersensitivity.

And chemical hypersensitivity is just one possible consequence of total toxic load. As the antioxidant defenses are overcome, biochemical cascades are set in motion that can damage any or all of the organ systems. The immune system is particularly sensitive to chemicals and as it becomes impaired the body can become persistently infected with viruses, Candida and other yeasts, bacteria, even aggressive amoebas and other protozoa. Toxic substances produced by these infectious agents then encourage chronic inflammation that further contributes to the toxic load. If such immune-inflammatory cascades continue over years, cancer can result.

Ongoing damage cascades in other organs and can generate other symptom patterns. Damage to the brain and nervous system can manifest in tremors, memory loss, personality changes. Damage to the heart can initiate arrhythmias and kill heart muscle, severely impairing heart function. Symptoms from chemical damage to the lungs and airways often amount to asthma and bronchitis. Skin eruptions can be highly varied and extend beyond reddening and rashes. And so on and on, for every organ system.

The spreading spectrum of damage from toxic chemicals doesn’t stop unless exposure is severely curtailed—zero exposure is mandatory—and aggressive treatment is instituted. If allowed to continue over long periods, high total toxic load will likely contribute to just about all the diseases known to science: cancer causation and progression, cataract and retinal degeneration, degenerative heart and vascular diseases, arthritis, multiple sclerosis, lupus and other autoimmune diseases, Parkinson’s disease, dementia that likely encompasses Alzheimer’s. The implications are obvious: anyone wanting to stay healthy for the remaining decades of their life expectancy must have a zero-tolerance attitude towards toxic chemical exposures.

Of course, with all the daily challenges we face maintaining zero tolerance to toxins is easier said than done. But with awareness of the problem and personal commitment, we can make progress in this direction. The toxins to which we are most often exposed fall into two major categories: the obvious toxins and the hidden toxins.